I was still working on this post on Sunday evening, so some of the details had already faded.  As best I recall, our day started much like most other days, except possibly for the Just Egg scramble with potatoes that Linda made for breakfast.  Beyond that, our day was mostly about wine and related beverages, with a brief pause in the middle to visit Watkins Glen State Park.

We originally intended to venture as far as Ithaca and dine at the Moosewood Restaurant, but that didn’t happen for several reasons.  First, and foremost, was that they were only open for lunch and dinner but not in-between, when we would have been there.  Secondarily, it is primarily a vegetarian restaurant (not vegan) and it was a long drive to get there and back.  Ithaca is a lovely town, of course, and home to Cornell University, so we would have liked to visit there again, but it was far enough out of our way that we needed a compelling reason to go.  Linda looked online and found another vegan place, but it was carry-out only, and you had to order online.  Eh, no.  We decided we would just taste wine, and buy some if we liked what was on offer.

The rest of this post is mostly photos with captions. 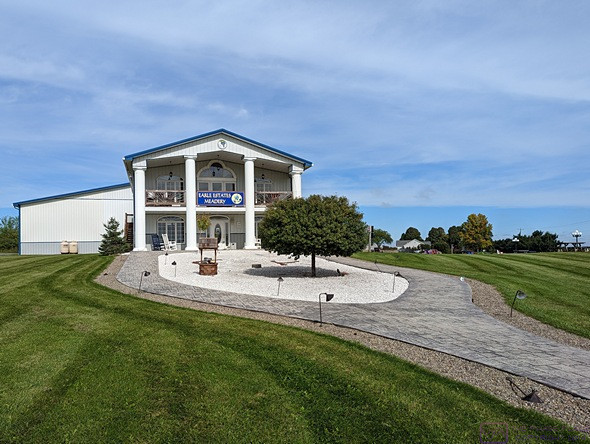 The Earle Estates Meadery on the west arm of the Seneca Lake Wine Trail.  It was not crowded while we were there, and we had a wonderful interaction with the young man who waited on us.  We found several offerings here that were to our taste and bought them. 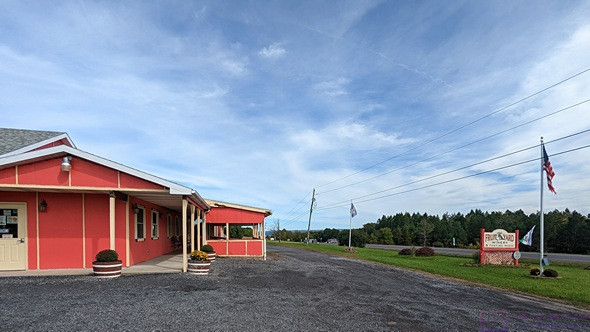 The Fruit Farm Winery had the broadest offering of “fruit” (100% non-grape) wines.  We would a few things that we liked and bought them.  It was the only winery / tasting room we visited where we felt the staff needed some training in how to deal with people looking to try, and possibly buy, expensive fermented fruit juice.

There are dozens of wineries just around Seneca Lake, and over 100 wineries / tasting rooms, as well as cideries and distilleries, in the Finger Lakes region.  But many (most) of them do not belong to the Wine Trail associations (one for each lake), so we did not have much information about most of them.  The meadery and winery mentioned in the two photos above were the only ones where we planned to stop, so from there we just enjoyed the drive down to the Village of Watkins Glen to visit the eponymously named State Park. 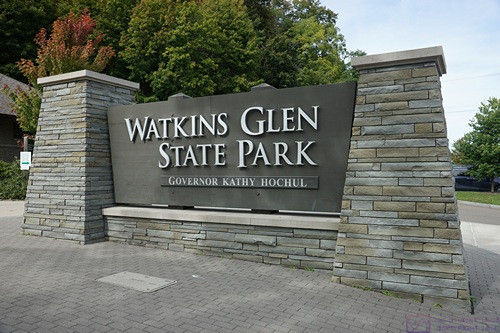 The entrance sign for Watkins Glen State Park in Watkins Glen at the southern tip of Seneca Lake in New York.  Admission was free and we were able to find free parking on the street just across from the sign.  There was also reasonably priced and convenient Park parking nearby. 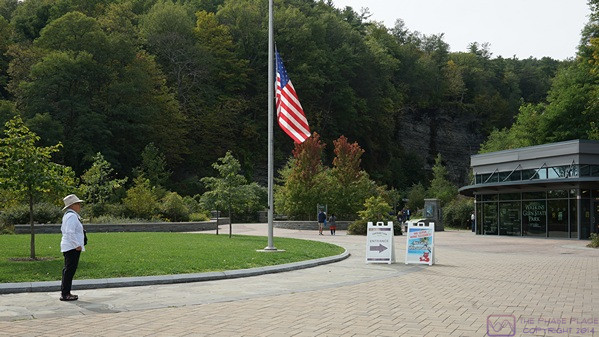 Linda on the path into Watkins Glen State Park across from the Visitor Center and Gift Shop buildings. 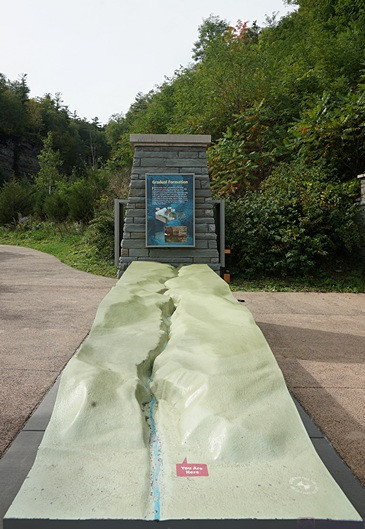 This model of the park greeted us on entry.  From the website:  https://parks.ny.gov/parks/142/details.aspx  “Watkins Glen State Park is the most famous of the Finger Lakes State Parks, with a reputation for leaving visitors spellbound. Within two miles, the glen’s stream descends 400 feet past 200-foot cliffs, generating 19 waterfalls along its course. The gorge path winds over and under waterfalls and through the spray of Cavern Cascade. Rim trails overlook the gorge.” 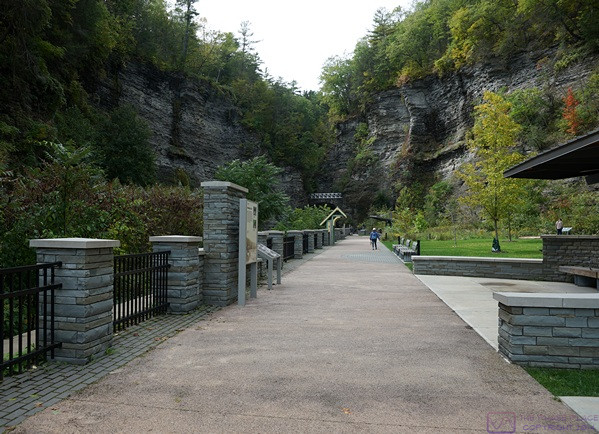 Heading into the gorge, we first encountered this wonderful area, but a much less “refined” experience is just around the corner (or across the bridge or up on the bluff). 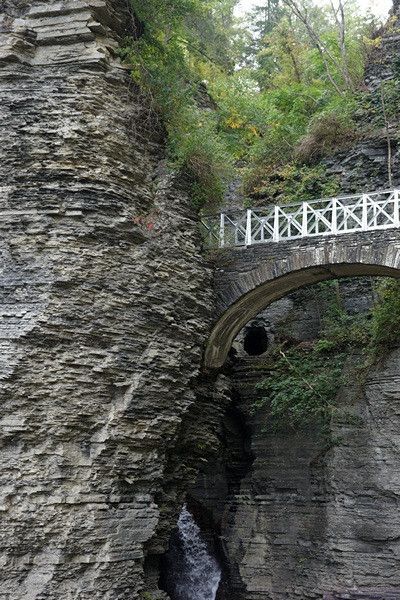 What appeared initially as the end of small canyon was in fact of outlet end of the two miles of gorge described in the caption about the model above.  A very sturdy bridge, accessed by stairs in a tunnel, eventually took us across to the Gorge Trail on the other side. 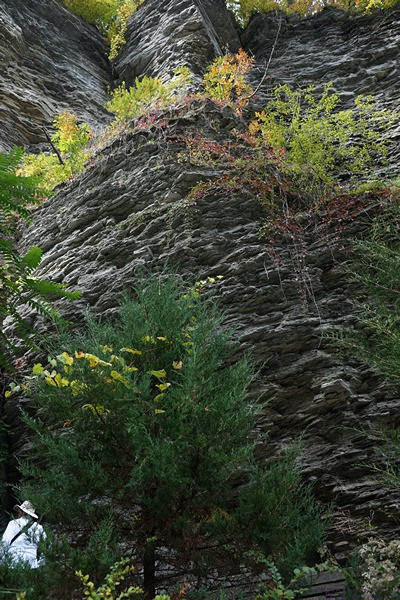 Linda’s white shirt is just visible in the lower left corner of this photo.  She is about to head into the tunnel that goes up and to the left to the bridge. 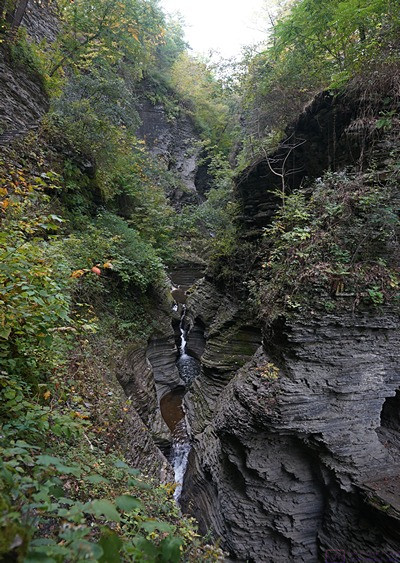 Our first real look at the Gorge from the Gorge Trail on the other side of the bridge.  This is as far as we went.  The full trail was a mile long, wet, and had over 800 steps.  We had not budgeted the time, nor brought the appropriate clothing, for such a hike, but were glad to see what we saw.We left Watkin’s Glen State Park and continued up the Seneca Lake Wine Trail on the east side of Seneca Lake.  We only stopped at one winery but enjoyed the drive.  “Wine country” has it own special look, with acres and acres of vineyards (and orchards) and a wonderful variety of winey tasting rooms.

We returned to Seneca Falls briefly so Linda could pick up a few things at the Women’s Rights NHP gift shop.  We were headed back to the KOA and decided to vector off to one last winery on the east leg of the Keuka Lake Wine Trail. 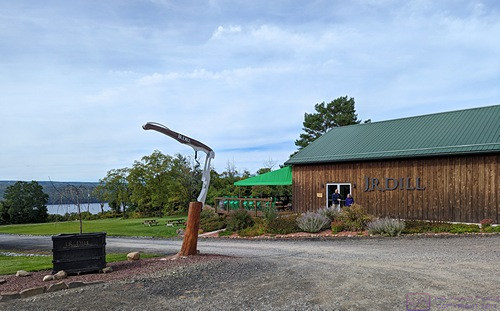 We stopped at the J. R. Dill winery on our way north along the east side of Seneca Lake after visiting Watkins Glen SP.  The information we had indicated that they made mostly dry red wines, including Cabernet Franc wines and some others grapes we were not familiar with.  I am not a fan of red wines, in general, but Linda likes them, and we are always on the lookout for ones that we can both enjoy.  By this time, we needed something to eat.  They had soft pretzels on the menu, so we each had one.  We did buy a few things from here. 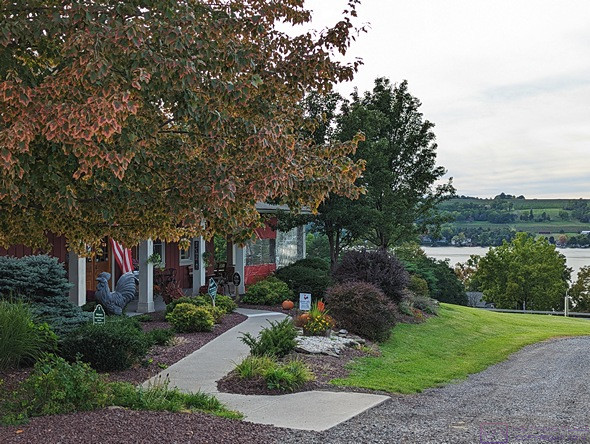 The man at Earle Estates Meadery gave us a card for a free tasting at the Rooster Tail Winery on the east side of Keuka Lake.  He also mentioned that they made a port, so we made that our last wine trail stop for the day and, as it turned out, for our visit to the Finger Lakes region of New York State.  They also had several things that we like, and bought.

We had a nice drive back to the KOA, where Linda started preparing dinner and I reorganized the back seat of the F-150 to properly store/transport all of the wine/mead we had collected throughout our grand tour.  We were finishing dinner when an otherwise ordinary sky exploded with color.  I grabbed my phone to see what I could capture. 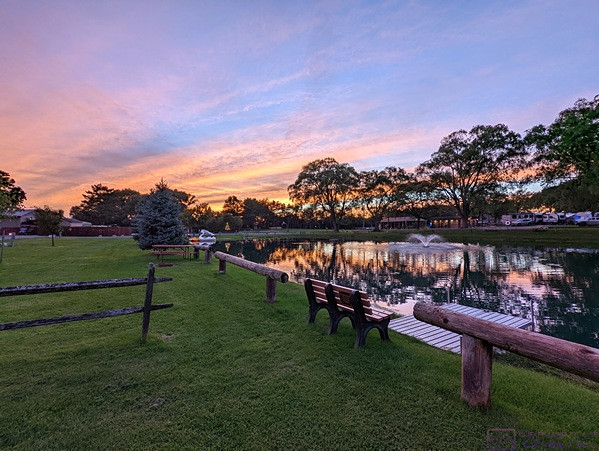 This is the view looking west from the empty site just across the road from our site at the Canandaigua-Rochester KOA Holiday. 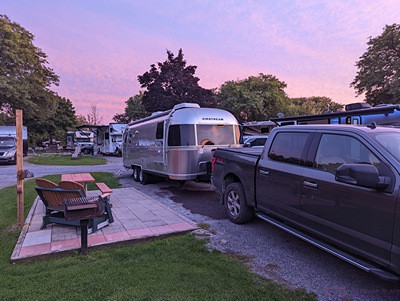 The view looking south at our patio site (#18) with a pink-purple glow in the sky. 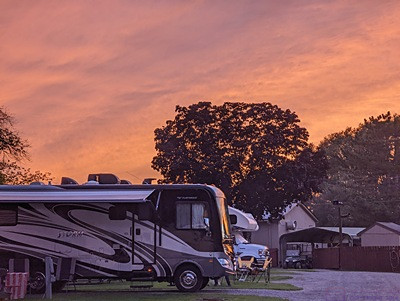 The sunset eventually went orange red.  I zoomed in on a portion of it to try and capture the color.