I did not get to this blog post until the afternoon of the 13th, so I have “lost” some of the details.

The main focus of today was Terra Nova National Park (Parks Canada), some 50 miles east of Gander on the Trans-Canada Highway.  The weather forecast was for cloudy conditions all day and some possibility of rain, but with highs only in the 60s (F).  We went anyway, leaving mid-morning.  This park was one of the two main reasons we booked an RV park in Gander, and we were not disappointed.  From the official park website:

“… The wonder and drama of Canada’s most Easterly National Park, Terra Nova. It’s a magical place where the land and sea compete for your attention, where the island boreal forest reveals its natural and cultural secrets as you hike a trail and where you can experience an evening of theatre under the stars. This place is ready for your next adventure-make it your own!”

The Park is an official “dark sky” area, but to experience this we would need to be camped in the park.  One of the “lessons learned” from our first trip to Newfoundland, and Eastern Canada for that matter, is that we would want to try and camp in the National and Provincial Parks if possible.

“A ragged-shaped oceanside park of sheltered inlets, islands, headlands, ponds, forests and bogs across 400 square kilometres (154 square miles), Terra Nova is perched on the northeast coast of Newfoundland, a three-hour drive from the provincial capital of St. John’s.

Though easily accessible by the Trans-Canada highway, it is a traditional island wilderness with abundant wildlife like black bears, lynx, ospreys, moose and the rare indigenous Newfoundland marten.

Join a campfire sing-along, touch sea critters in a tank, enjoy live performances under the  stars. Arrange a guided, interpretive park tour or explore the park on your own for a day or on a multi-day camping trip. 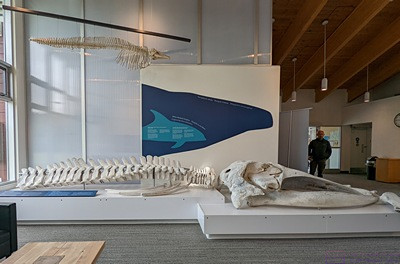 This display in the Visitor Center had life size skeletons of a dolphin (top, complete) and Humpback whale (bottom, front portion only) for size comparison.

Our first stop was the Visitor Center, where we picked up maps, got suggestions for easy hikes, and watched several short films about the park. 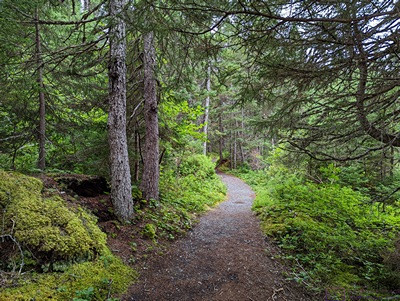 The loop trail by the Visitors Center, Terra Nova National Park, Newfoundland offered another lovely walk in the woods.

We did a short loop hike with minimal elevation change. 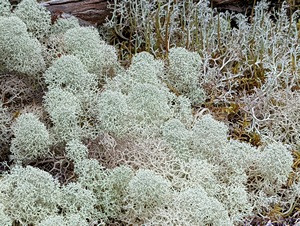 These lichen were plentiful along the Visitor Center loop trail.

The flora along the trail was varied and interesting, but this light-colored lichen really caught our attention.  They appeared white to our eyes, but the photos revealed hints of color.  Linda used Google Lens to identify them as the fungus “Cladonia stellaris.”

From Wikipedia: “Cladonia stellaris or the star-tipped cup lichen is an ecologically important species of cup lichen that forms continuous mats over large areas of the ground in boreal and arctic regions around the circumpolar north.”

A 270-degree panorama shot from the top of Ochre Mountain, the 2nd highest point in Terra Nova National Park.

Based on the advice we got from the staff at the Visitor Center, we headed farther east on the T-CH and drove to the top of Ochre Hill, the 2nd highest point in the park.  We hiked the trail that loops around the top of the mountain to the base of the fire watch tower.  The tower stairs were open to ascend, but we chose not to.  Linda is not crazy about heights, and neither of us felt like making the climb.  Besides, we had great views in all directions from the trail and viewing areas. 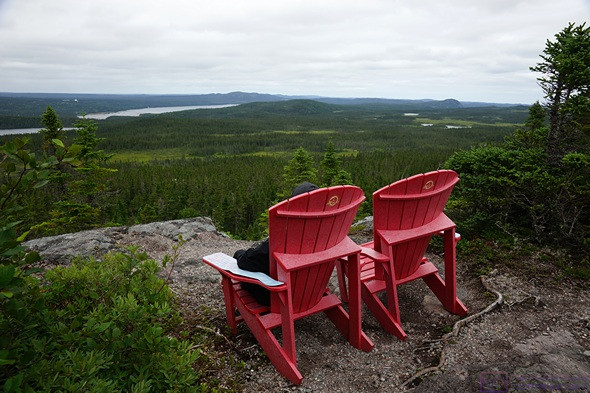 The ubiquitous “red chairs” that Parks Canada so thoughtfully places throughout the park at vantage points that invite one to sit and observe and contemplate (or perhaps just rest). 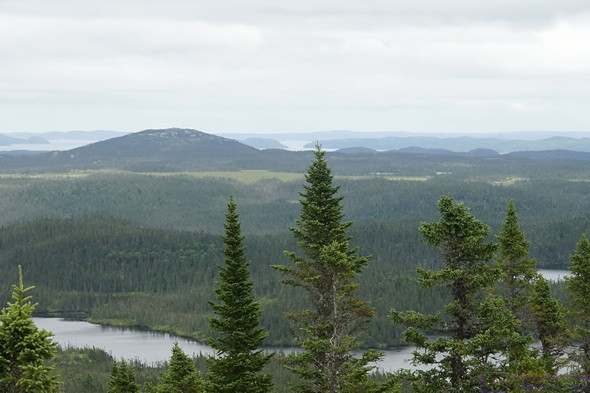 The views were sweeping, and we could see a long way in every direction, even with the overcast conditions. 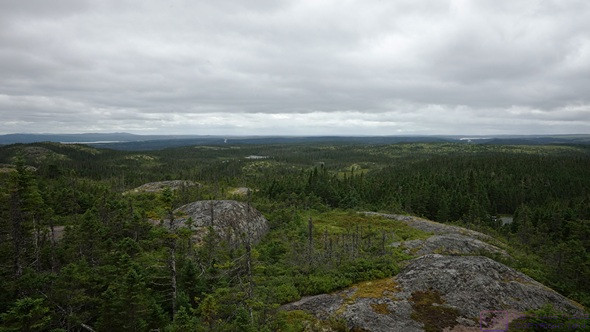 The deep bays of this area bring the North Atlantic Ocean well inland, but there are also many rivers that flow to the sea and freshwater ponds.

Our next destination was Blue Hill, the highest point in the park. 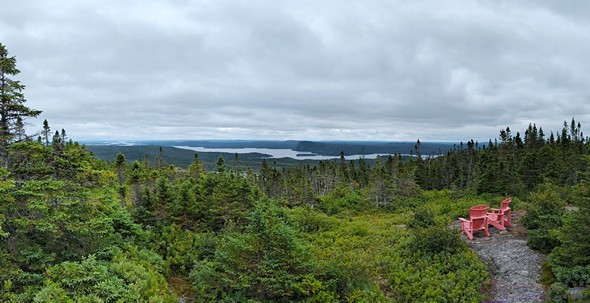 This was the view I liked best from the top of Blue Hill, shot as a panorama.  Again, the red chairs, always in pairs, are placed to enjoy good views. 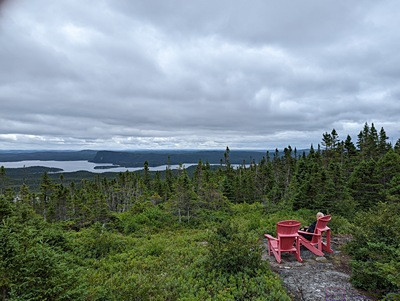 Here is the same basic view.  Linda is in the chair on the right. 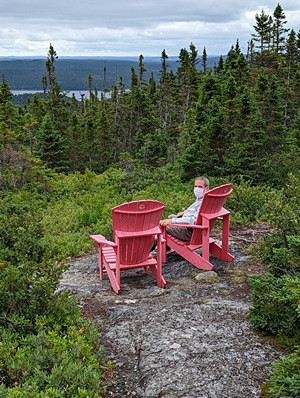 Bruce takes his turn in the right-hand chair.  (Photo by Linda.) 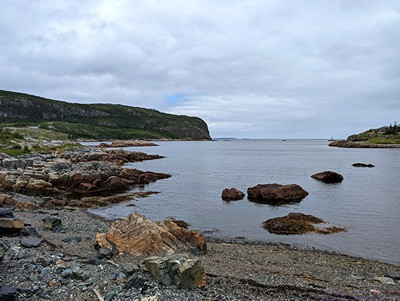 Part of the bay/harbor at Salvage, NL

The park staff had also suggested that a drive out to Salvage at the tip of the Eastport peninsula was a worthwhile trip.  The route was NL-310, “The Road To The Beaches” back to the west from the Blue Hill road.  Like much of Newfoundland, this was an out-and-back drive, taking us in and out of the National Park and passing through the villages of Sandringham and Eastport.  It is self-described as “The Festival Capital of Newfoundland and Labrador.”  From Wikipedia:

“Historically and archaeologically, the Eastport Peninsula has been host to human settlements and activity for at least 5000 years by a variety of Indigenous cultural groups, including the Maritime Archaic, the later Groswater and Dorset, and most recently Beothuk peoples” 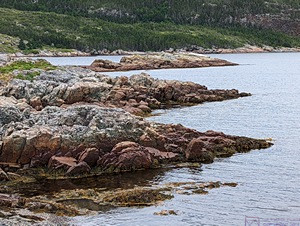 I thought these rock formations were visually interesting.

The drive to Salvage just one lovely view after another, and village itself was picturesque, in a remote and dramatic setting.  But we did not see any obvious places to park and the overcast conditions reduced my motivation to take photos.  Sometimes it’s OK to just look at what is front of me and not think too much about photographing it. The views were just as nice on the drive back.

It was late afternoon by the time we got back to our RV and we were ready for dinner.  Linda made her standard pasta dish, but with multi-colored bow-tie pasta.  They are all wheat pasta, but the green ones have spinach, and the red ones have tomato added to the mix.  Linda prepared her usual base recipe, with onions and garlic sautéed in olive oil with red pepper flakes, and then mushrooms and sun-dried tomatoes added in.  She still had some vegan Italian sausages, so she cut those up and added them to the dish.  The dish is delicious without the sausage bits, but they definitely kick it up a notch.  We topped it with vegan parmesan “cheese” (“sprinkle cheese” to our youngest grand-daughters).  We had grapes, red and green, and liquid (we were feeling well enough to each have a small glass of wine).  We had tofu pudding for dessert.

We had managed to not make the day too long or too strenuous but were nonetheless tired, and I was not up to processing photos or writing the blog entry for today.  Games, puzzles, reading, bed.