We are both relatively new amateur (ham) radio operators.  Linda holds a General Class license with call sign K8LMF and I (Bruce) hold an Amateur Extra Class license with call sign K8BRF.  We currently own/use Kenwood TH-F6a handheld radios, have an Icom V8000 2m mobile unit installed in one of our cars, and an Icom ic-7000 HF/VHF/UHF mobile rig in a self-contained “go-box” with it’s own power supply.  We are still building our “base station” and trying to figure out what we need to do for antennas while RVing. 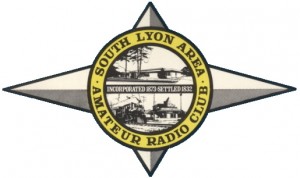 We are members of the American Radio Realy League (ARRL) and the South Lyon Area Amateur Radio Club (SLAARC), an ARRL affiliated local ham radio group.  Bruce was elected vice-president of SLAARC for 2013 and again for 2014.The club meets for breakfast every Saturday morning at 08:00 local time at the Senate Coney Island on Pontiac Trail at 11 Mile Rd. 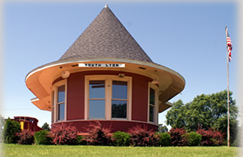 SLAARC members are involved in all aspects of amateur radio including contesting, making DX contacts, building electronics, experimenting with antennas, operating digital modes, and public service.  We participate as a club in two events each year, the Michigan QSO Party, and the ARRL Field Day.

Field Day is a national event that commences at 14:00 EDT on the 4th Saturday in June and ends 24 hours later.  It’s purpose is to demonstrate amateur radio’s ability to put a large number of radios “on the air” in a short amount of time, keep them on the air continuously for 24 hours, and make a staggeringly large number of “contacts”.  In other words, the ability of the amateur radio community to respond in a big way on a large scale should the need ever arise.  SLAARC sets up and operates from the Lyon Township Park (atop the landfill) and the public is invited to stop by and participate.

The ARRL is a private, not-for-profit organization that represents the interests of it’s members to the U. S. government and international organizations involved in amateur radio, specifically, and the worldwide use of the “radio frequency specturm” generally.  The ARRL works closely with the Federal Communications Commission (FCC) with is the government body responsible for regulation and enforcement relative to radio frequency communications in the United States.