Mara’s plan was to make this the last full day of her visit.  Our day started without her as we had cinnamon raisin toast, juice, and coffee for breakfast.  I got a call from Jarel with clarifying questions and ideas about the desk and the pull-out pantry.  After a thorough discussion we had better ways to approach a few things.  He also had a better feeling for the estimated cost of the project and I agreed to send him 50% as a deposit.

I typed up a short letter and printed off the graph that Steve made of the return loss for the M-302N V/U lightning arrestor.  I packed the unit for shipping to Morgan Manufacturing and included the letter and graph.  Linda wrote out the check for Jarel and got it in an envelope to mail.  She then went to the library, Post Office, and Humane Society where she donated cat and dog paraphernalia that we had accumulated over the years.

While Linda was gone I worked in the bus for a while and Mara worked on travel preparations.  I started by removing the old 3/4″ plywood floor from the refrigerator alcove.  The original plywood bus floor appeared to mostly be in good condition but I will put a new secondary floor in the alcove to keep the refrigerator legs above the level of the new tile floor.  There are a LOT of wires running along the floor of the alcove at the back wall and I may fashion a cover for them and seal up the holes at either end.

I removed the AC dimmer for the living room lights and the DPDT momentary contact DC switch from the floor-mounted walnut box where they were installed.  The DC switch controlled the passenger side sofa footrest.  I had to remove the wires from both switches to get them out.  The AC dimmer was easy but the DC switch had four different color wires with spade connectors.  I made careful note of which terminal each color went to and then pulled the spade connectors off.  With the switches out I was able to remove the box and its mounting cleats from the floor and wall.  This area will be tiled and the box will not be reused.

Out of curiosity I tested the switch with an Ohm meter to see how the terminals were connected internally.  I also checked the wires with a DC volt meter to see how they were being used.  Two of the wires were +12VDC and DC ground and the other two went to a connector that was originally plugged into the footrest.  The switch applied 12VDC to the two load wires in one position and reversed the polarity in the other position, making the footrest go out or in respectively.

Last year I had removed two blank outlet covers on the walnut panel next to the co-pilot seat so I knew that these two switches were originally installed there and subsequently moved to the floor-mounted box.  I unscrewed the 1/4″ walnut veneered plywood panel from the wall to see what was behind it.  What I found was a LOT of wires and it was not a pretty sight.  I re-installed the two switches in their original locations and re-routed some other wires so they went up over the HVAC chase.

There was still a large bundle of wires running along the floor at the base of the HVAC chase that I needed to re-route but I decided not to mess with those today.  They are connected to four different switches and a doorbell and disconnecting everything was going to require careful attention to detail.  I pondered the refrigerator some more and decided there wasn’t anything else I could do with it for now and that I was done working in the bus for today.

There is too much to do at the moment to just sit around so I decided to install the new garage door opener for the small garage door.  New is relative; it has been sitting in the garage in its original packaging since we moved into the house, supplied by the previous owners.  The old one has not worked correctly since we moved in and the previous owners bought the new one but ran out of time to install it.  It turned out to be rather more complicated than I expected, with very comprehensive assembly and installation instructions.  It also turned out to be a two-person project so Linda worked on it with me.

We were working and Mara had started prepping dinner when a UPS truck showed up with four boxes.  The delivery included:  Mara’s refrigerator vent cover; the Cutco knives and scissors, and; the ZioTek track system for wall-mounting the monitors in the ham shack (2 boxes).  The vent cover was due for delivery today but the knives were not due until tomorrow, so we were really glad to see them as two of them were for Mara.  The monitor mounting system was also due for delivery today but I had temporarily forgotten about it. 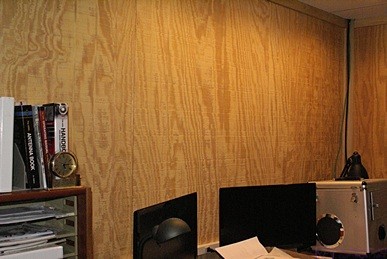 The north wall of the ham shack/office. This is where the ZioTek wall-mounted monitor mounting system will go.

Mara was understandably anxious to see if the vent cover fit her base properly.  It was a VentMate and appeared to be identical to the old one.  She climbed up the ladder on the back of her motorhome and I handed parts and tools up to her.  I then climbed up was well.  She removed the old cover and we set the new one in place.  It was a perfect fit!  We put a small amount of putty under each screw head and then ran them down snug and congratulated ourselves on another job completed and well done.

With Linda’s help we put Mara’s kayak back in its custom carrier which fits in the receiver on the back of her motorhome (she does not tow a car).  The carrier was built by a welding shop in Mesa, Arizona to Mara’s specifications and is made from 2″ square tubular steel and powder-coated black.  The carrier holds the kayak diagonally across the back of the motorhome from lower left (driver’s side) to upper right.  The nose of the kayak sits in a pocket near the driver side rear corner of the motorhome and the midpoint is nestled in a much larger cradle.  A strap runs from the nose pocket up to the midpoint on one side and across the kayak to the other side where it is attached to a ratchet and has a hook on the end.  With the hook engaged in a ring the strap is ratcheted tight and the kayak is secure for travel.  Mara runs an anti-theft cable through an eyelet near the nose and attaches a lock for safe keeping.  The tail sticks up higher than the top of the roof-mounted air-conditioner covers but does not extend beyond the passenger side wall.  The tip of the kayak is 13′ 2″ from the ground.

We made good progress on the garage door opener but had to stop at the point where we needed to attach the motor housing to the ceiling as I needed to get some parts (angle iron and lag screws) that did not come with the unit.  The front of the track was attached to the header above the door opening and we left the motor assembly resting on top of a 6 foot stepladder. 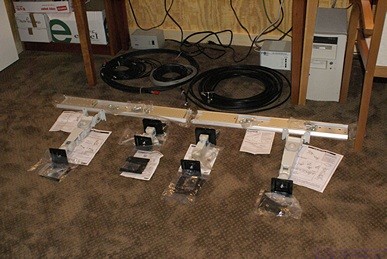 The pieces of the ZioTek monitor mounting system laid out on the floor of the ham shack/office.

While Mara and Linda prepared dinner I unboxed all of the monitor mounting components.  I was curious to see the parts and wanted to make sure everything was there and undamaged, which was the case.

Dinner was Thai vegan spring rolls in rice flour wrappers.  The prep work was in the cutting of lots of veggies (carrots, zucchini, onions, red and yellow peppers, Chinese cabbage, and mushrooms).  Mara made two dipping sauces, one with ginger, hot peppers, and other things and one based on fish sauce (so we passed on that).  Linda selected our bottle of Malvasia Bianco wine from the Heart of the Desert winery in Alamogordo, NM.  It was white, which we thought would go well with the delicate spring rolls, but very sweet with a slightly thick mouthfeel, like a late harvest Riesling or a Sauternes.  Perhaps not the best choice, but we finished the whole bottle anyway.

We chatted for a while after dinner but like most of our evening meals dinner was a drawn out affair with lots of conversation.  Everyone was tired and the women turned in for the night.  I went to my office and answered e-mails from Gary at BCM that I had seen earlier in the day.  I then went to bed and tried to catch up on blog posts for the last few days but could not stay awake long enough to finish them.