Today was a relocation day.  That meant breaking camp, towing the tailer, and then making camp at our destination.  Linda had this down pat for the inside of the trailer and truck, but we were lacking a set, well-practiced routine for the hitching, unhitching, and leveling steps.  It was clear by the end of the day that we needed to write down the process and have it on our phones to refer to when making/breaking camp.

Paul and Nancy left at 8:30 AM to get a jump on traffic and build in time for a fuel stop.  We left around 9:30 AM.  The 401 was a bit busier than we expected for a Saturday morning, be we had no problem navigating the traffic and construction zones.  The construction that is underway was quite impressive, matched by the ability to mostly keep traffic moving well.  In spite of the usual jerks, we found that most drivers handled merges caused by lane closures better than in the States.

We eventually cleared the east end of the greater Toronto metro area and found ourselves in rolling hills of green with occasional views of Lake Ontario and then the St. Lawrence River as we entered the “1000 Islands” area.  We passed two signs for bridges to the USA, but our destination was the 1000 Islands KOA just north of the city of Kingston, ON (W3W=sleeps.fussed.hello).  All told the construction-related traffic on the 401 only added 30 – 45 minutes to our travel time.

Paul and Nancy were already there when we arrived.  After making camp we went to their rig to hang out, have dinner, and enjoy a camp fire.  Here are pictures of our site and three of us on their patio. 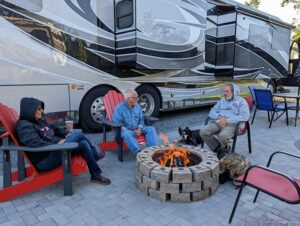 Our only “ding” for this campground was the Wi-Fi.  Not the signal, but the policy.  We were given a small slip of paper with a very long numeric code but no further information.  It turned out to be a one-time use for one device code which we used on one of our cell phones, where we didn’t need it.  The office was unable/unwilling to transfer it to a different device but we could buy additional codes for $6 each for 72 hours of service.  KOA’s are not inexpensive, but we are using them on this trip because the reservation system works very well, the cancellation policy is very user friendly, and they generally have lots of amenities, including Wi-Fi.  When paying for all of that, we do not like being nickel and dimed, especially for Internet access. 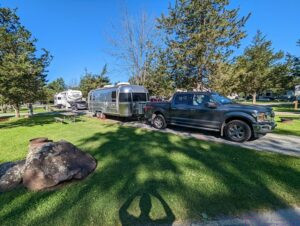 Our rig in or spot for the night

The campground was nice enough, with plenty of trees and lots of facilities in reasonably good condition.  It was essentially full, this being Father’s Day weekend, but it had a nice vibe.  There were lots of families with children and the weather was very nice, if still a bit breezy.  We had a sewer connection at our site, but arrived with empty waste tanks.  We were close to the bathrooms/showers that we minimized the use of our waste tanks so as not to have to dump in the morning on the way out.