Our long anticipated and well-planned trip to Atlantic Canada was finally underway.  We had an easy drive to the border with Canada and a relatively easy crossing, taking about 30 minutes to get across the Blue Water Bridge from Port Huron, Michigan to Sarnia, Ontario and clearing the checkpoint around noon.

We had our first “glitch” of the trip at this point.  In spite of having completed the ArriveCAN process, we were randomly selected for a COVID-19 self-test.  More on that later. 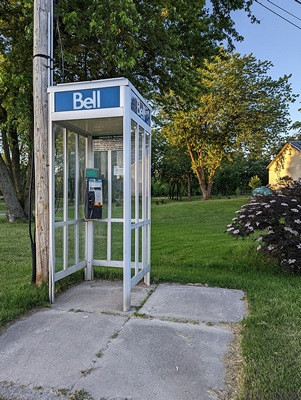 The TARDIS, a good omen for our travels (Bell Canada Phone Booth)

The remaining drive to Milton Heights Campground via the 403 and 401 was busy but uneventful.We found the campground easily and got set up in our site (W3W=begged.bench.eternal).

In a fitting beginning for our adventure, the campground had a TARDIS. 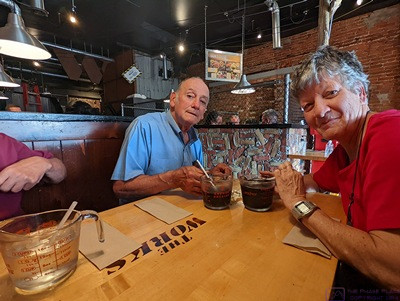 Our Busnut friends, Bill & Karen, live in this area

We selected this campground because it was a good driving distance from our house, it was convenient to the 401, and close to our fellow GLCC/CCO busnut friends, Bill and Karen.  They came over to visit and then we all went to dinner at The Works in Milton.  The Works is a burgers and brew chain, but they had vegan burgers, so it worked out well for all of us.

We spent the rest of the night making phone calls and trying to figure out how to correctly complete the COVID-19 self-test process.  We only had one test kit, and decided that Bruce would take it as the Border agent handed it to him.  The test had to be witnessed via a virtual (online) appointment, which we managed to schedule for the next morning at 10:40 AM.

The virtual appointment had to be conducted via Microsoft Teams, which we did not have installed on any of OUR six devices.  Bruce installed it on his phone as we had a good cellular signal.  The appointment began right on time, the technology worked well, and the person on the other end was very professional and proficient.  It turned out that we could drop the kit off at any LifeLabs location, and we knew exactly where one was located in Milton, just a few kilometers away.  We went there directly and dropped it off before noon, completing the process in just under the required 24-hour time.  It was a relief to at least have this taken care of.

Paul and Nancy, who we are caravanning with until the end of July, arrived late morning.  The only surprise in the weather, up to this point, was the very strong winds.  Mid-afternoon we all drove over to Bill and Karen’s house to visit and eventually headed to Pizza Pizza in Georgetown for dinner. Pizza Pizza has vegan options, and our pizza was good.

The results of Bruce’s COVID-19 test were posted at 05:36 this morning.  The test was NEGATIVE and we were free to travel.  It was a relief to have it done, but it made for a very stressful start to our trip.

Some quick research revealed that we were not far from the Conservation Halton Mountsberg Park and Raptor Center, so the four of us drove over there mid-morning.  The sign at the entrance indicated that we had to have a reservation to get in.  There was a website address, so Nancy used that to make the reservation for a few minutes later.  Payment was by credit card, and in we went.  There were a lot of school-age children at the park, but the park is very large and we were able to amble through the Raptor Center with only a few other adults present.  As expected, most of the birds are residents for life, having either been injured or habituated to humans before arriving at the center.  Still, they appeared to be well cared for, with large enclosures and we had the opportunity to see eagles, hawks, falcons, and owls up close.  Linda got this photo of a Great Horned Owl. 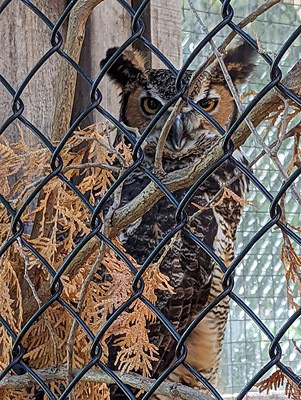 On the way back to camp we stopped at the Campbellville post office to buy stamps to mail postcards to our two youngest grand-daughters.  Bill and Karen came to the campground mid-afternoon and we all had our left-overs from the night before for dinner.  All-to-soon it was dusk, and our time in the Milton area was drawing to a close.  Tomorrow’s drive would almost entirely be on the 401 through and beyond Toronto.  We knew that would involve a lot of traffic, even on a Saturday, as well as numerous construction zones, so we opted for an earlier than usual bedtime to be well-rested by morning.