The forecasted low last night was mid-30s (F), so during the evening we switched the HVAC controller for Zone 2 from heat-pump to furnace and set the desired temperature to 64 (F).  I set the thermostat to 58 (F) before going to bed around midnight.  The furnace ran perfectly all evening and through the night, as it has all summer, until sometime in the early morning.  I was half asleep and heard it short cycle, which is to say, the blower came on, ran for about 15 – 20 seconds, and then shut off.  That was a sure indication that the burner had failed to ignite.  As soon as I heard that, I was wide awake and got out of bed to investigate.

The temperature in zone 2 was 56 (F), confirming that the furnace had failed to run, as the actual temperature never drops 2 degrees (F) below the set point.  I turned up the desired temperature to 62 (F), but the furnace still did not come on.  (ABIR, I think it has a lockout feature that prevents repeated attempts to start after some number of failures.)  I thought that perhaps we had used up a tank of propane (highly unlikely) and that the valve on the other tank was shut, so I turned on one of the burners on the range to check.  It lit right up, so I knew we had propane.  I went outside anyway and opened the valve on the 2nd tank.  I came back in, now slightly chilled as it was 34 (F) outside, and put the water on to boil (electric kettle) to make coffee and wait for the sun to warm up the outside air to the point where we could run the heat-pumps in heating mode.

The most obvious reason the furnace had failed to ignite was that the “sail switch” had failed to detect air flow.  If so, it was not the first time this had happened; the switch is (apparently) delicate, and we have had this switch replaced once already.  I also do not know how to access it and replace it, but was feeling like it was time to learn, and carry one or more spares when we travel.  I would not, however, have undertaken that repair this morning as it was last travel day of our grand tour of Eastern/Atlantic Canada and New England.  By mid-afternoon, we would be parked in our driveway and moving back into our house, thus no longer dependent on the trailer for a creature comfort.  The failed fresh water pump was actually more of an issue, as I could not fully winterize the fresh water system without it.

We were both up early enough to have a cup of half-caffe coffee and a light breakfast.  Checkout time was noon, but we had no reason to stay at the Streetsboro-Cleveland KOA Holiday until then.  We were not in a rush to leave either, however, as we wanted to let it warm up enough outside to be comfortable when breaking camp. 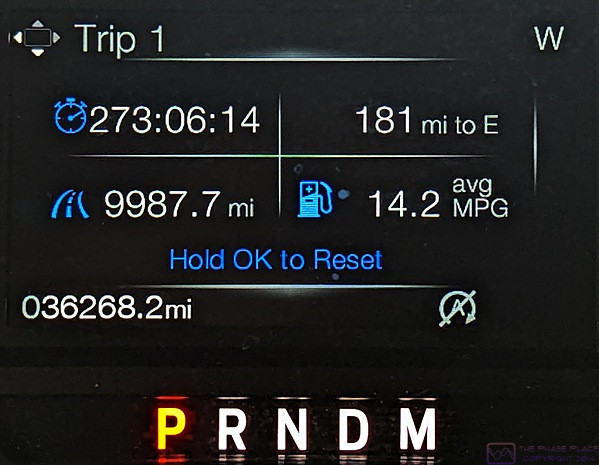 Our drive home was ~210 miles, almost all of it on Interstate and US highway with speed limits of 65 – 70 mph.  Our estimated travel time was 3-1/2 hours.  That meant it would probably take us closer to 4 hours to make the trip, so we targeted an 11 AM departure time.  Our departure preparations were smooth and unhurried and we pulled out of our site just before 11 AM.

We reversed our route from Saturday, heading east on OH-303 to OH-14 and then north to The Ohio Turnpike (I-80/90) Toll Road.  We got on the Turnpike heading west and set the cruise control at 64 – 68 mph, depending on road and traffic conditions.  We passed through a few short construction zones where we had to slow down to 40 – 55 mph, but then did not cause a significant delay.  At Toledo, Ohio, we exited the Turnpike onto I-75 North and then took I-475 West to US-23 North towards Michigan.  The toll road was in excellent condition, as was US-23 in Ohio.

US-23 in Michigan was a different story.  Although it is a limited access (4-lane divided) all the way to Saginaw / Bay City where it merges into I-75, the section from the Ohio border to Ann Arbor was in the same terrible condition that it has been in for years.  This is what visitors to our state first experience when coming in by this route, and it’s a sad embarrassment. 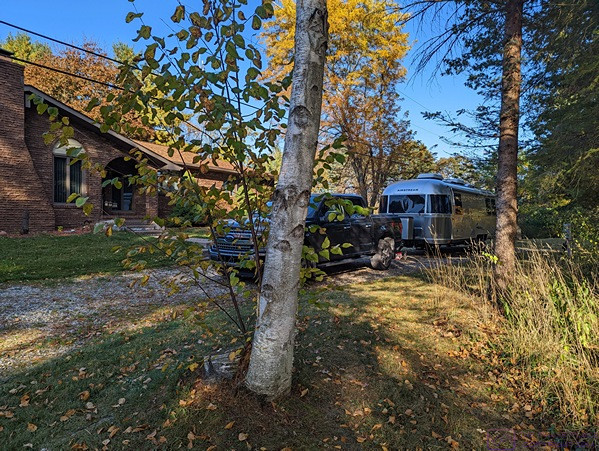 Our truck and trailer, back in front of our house where our grand tour of Eastern/Atlantic Canada and New England began on the morning of June 15, 2022.  It was hard to believe we were back home, and like we had never left.

We exited US-23 at M-59 (Highland Road), headed west towards our house, and a few minutes later pulled into our driveway.  I had pulled into enough pull-through RV sites over the course of the summer that I had pretty much figure out how get the truck and trailer aligned, essentially for unhitching, with the trailer positioned where I wanted it.  I am glad to say that I got it right on the first try this time. 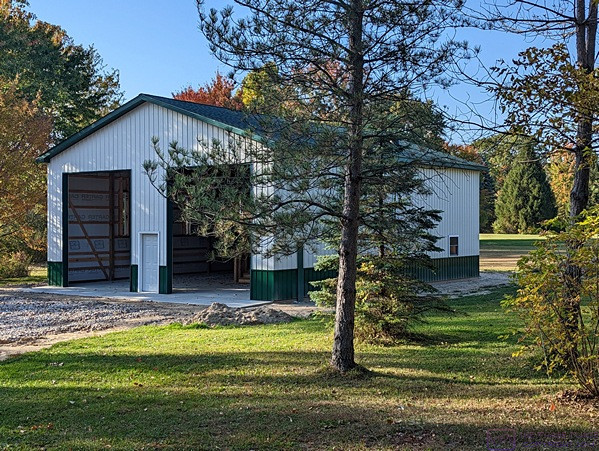 As we walked down the driveway we could make out some of the barn through the dense pine and fir trees just west of our house.  This was our first full view of the building, looking NW at the SE corner.  It looked great, and there was no doubt we had picked the right builder to handle this project.

The very first thing on our list, after unlocking the house, was to move Juniper-the-Cat inside.  Linda let her out of her carrier by her litter tray in basement bathroom, just the make sure she remembered where it was located.  We had remotely set the heat-pump (main floor of house only) up to 65 (F) before leaving this morning, and turned it up to 68 (F) when we got home.  I then turned the water to the house back on, plugged in the water softener and filter/sanitizer, and reset the date/time to the correct values.  We had also turned off the main (hot water baseboard) furnace before we left.  That meant we had no hot water, so I turned the main unit back on.  It was cool in the basement, so sometime later I turned on the basement zone and let it start to warm up. 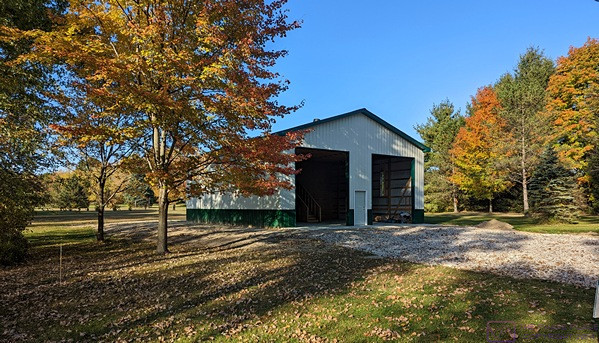 This is the view looking NE at the SW corner of the barn from the north edge of the road.

Before turning our full attention to unloading the trailer and the truck, we walked down the west end of the pull-through driveway to see the RV-Barn/Workshop-Storeroom for the first time.  Although we had followed its progress via photos, it was exciting to finally see it in person.  Since I had designed it, and we both had a clear sense of the size of the bus and travel trailer, we had a sense of its scale, but architecture is 3-dimensional and has to be experienced in person to really grasp.  That said, it was both impressively large and surprisingly not large at the same time.  It’s had to describe the feeling of designing something and then seeing it as an actual, 3-dimensional, functional object.  It’s a great feeling, really.  I took a few photos, some of which I have included in this post. 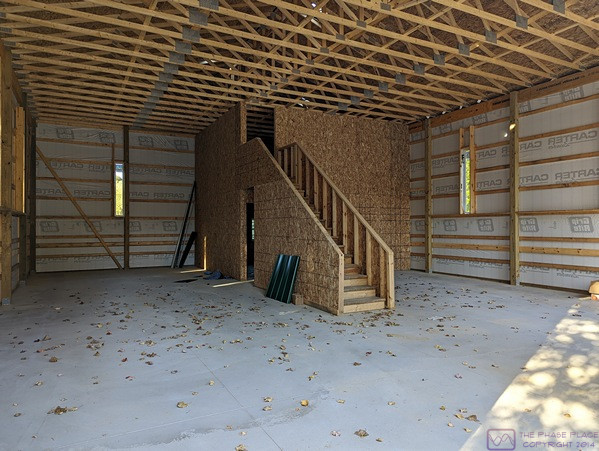 This photo shows the inside of the barn from the left bay door opening.  Lots of details are visible in this photo:  the concrete floor;  the 16’ wall posts and headers;  the house wrap on the walls;  the roof trusses;  the tall/narrow wall windows;  the shop (main floor) / storeroom (above) in the NE corner, and;  the stairs leading up to the storeroom (the door openings to both rooms are visible, with the shop door under the landing for the storeroom door).

We like to get our RVs emptied out as soon as possible after an extended time away.  As we moved things from the inside of the trailer and into the house, and unloaded the truck (back seat and bed), we were amazed at just how much stuff we had carried around with us over northeastern North America.  The trailer has more interior storage than it appears, and we made full use of it.  Ditto for the F-150. 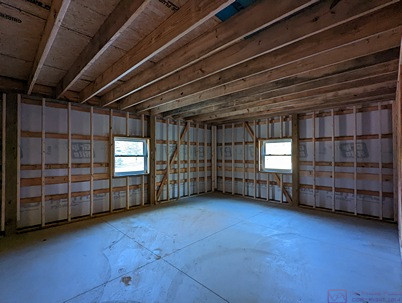 A view of the shop from the door opening in the SW corner, looking towards the NE corner.

After we had unloaded as much of the inside of the trailer as we wanted to for now, I checked the furnace again.  It lit right up and made warm air, but I also heard the blower on the Zone-2 heat-pump running.  The way the HVAC controller is designed, the furnace is on Zone-2, so we cannot run the furnace and the Zone-2 heat-pump at the same time.  After looking at the information screen more closely, I noticed that the FAN mode was set to Low.  Normally it’s set to Auto.  I switched it from Low to Med with no change, and then from Med to High, again with no change.  I then switched it to Auto, and after a few seconds the heat-pump blower shut off.  The furnace had continued running this whole time.

We have owned this trailer for almost exactly three years, and this was the first time I had ever observed this behavior.  I also had no idea why the furnace had failed to run this morning but was able/willing to run now.  The only thing I could think of was that the trip home, which had its “bouncy” sections (especially on US -23 in Michigan) had jarred the sail switch (or something else) loose.  (I did find a 1-1/2” pan head wood screw with a white painted head on the floor at the air return opening for the furnace, so who knows.) 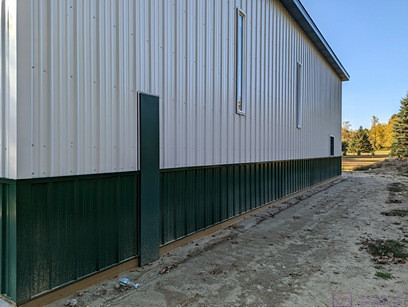 The east side of the barn.  The vertical green trim, towards the front of the barn, is where the electric utility meter can will go (at the top) and the power cable riser will be mounted (for an underground service entrance).

While Linda was dealing with the kitchen, putting away containers and appliances, I went to my office to resurrect all of the computing and networking equipment and start a second load of laundry.  I had sorted the clothes, bedding, and linens into at least six baskets, and it would probably take me until Thursday to get it all washed, dried, and put away.

By this point we were both a bit tired, so dinner was Amy’s Pad Thai and small glasses of the Auslese Riesling we had bought in Hudson, Ohio.  Always tasty.

At 7:30 PM, we Facetimed with our son and his daughters, but mostly with the older daughter, Madeline.  The younger daughter, Sadie, is about to turn 4-years-old, and is at that age where she understands a video call, and sees it as yet another opportunity to be a clown.  Madeline, however, who is almost 10, was able and willing to give an account of her recent activities, in and out of school, and how she feels about them.

After our online visit, Linda got a nice, long, hot shower while I went to basement to get the SONY TV system operating.  As soon as I turned it on, I was presented with a software update, so I initiated the installation, which took quite a while.  When Linda was done, I also got a nice, long, very warm shower.  The shower in our trailer is fine, and we don’t mind using it while traveling, but …

Being Monday night, we watched our usual CBS programs.  When the last one ended at 11 PM, we were off to bed.