(There are 11 photos in this post, distributed throughout the text with captions.  They were all taken on a Google Pixel 6 Pro smartphone.) 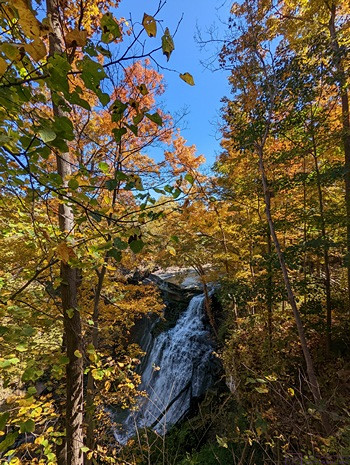 Brandywine Falls drops about 60 feet on a tributary to the Cuyahoga River.

True to the forecast, it got cold last night and it as chilly in the Airstream, 58 (F) to be exact, when I got up.  Linda was still sleeping, so I only bumped the thermostat up t 62 (F), but it was enough to take the chill out of the air and warm the floor up a bit.  (Some of the hot air from the propane furnace is blown into the belly pan, where the tanks are located, and then finds its way from there up into the living area. As such, it also heats the underside of the floor, at least above the belly pan.) 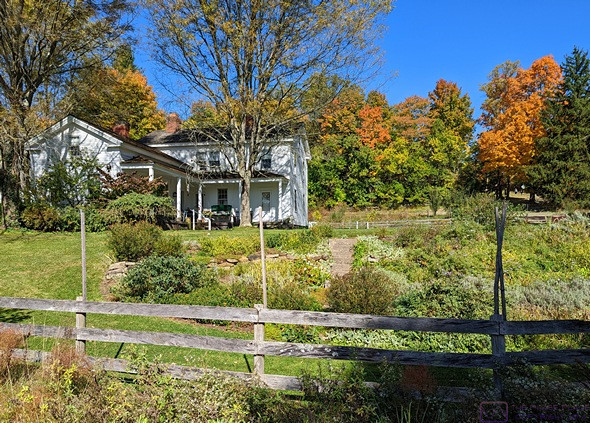 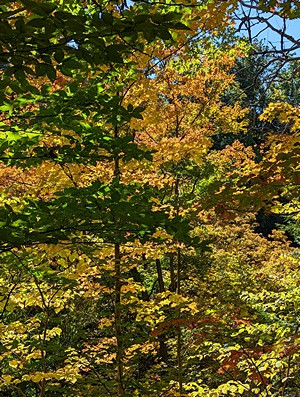 I saw these partially backlit trees while we were hiking the trail on the north side of the Brandywine Falls gorge.  (Cuyahoga Valley National Park, Ohio.)

Linda got up a short time later.  I made coffee for both of us, and bumped the thermostat up to 65 (F), and a bit later up to 68 (F).  Linda made scrambled eggs (Just Egg) with chopped up vegan bacon and baby gold potatoes added in.

Although it was chilly outside, the forecast for the afternoon was for temperatures in the 60s (F) and sunny skies.  Perfect weather for the last sightseeing day of our grand tour.  And our main objective today was to visit the nearby Cuyahoga Valley National Park. 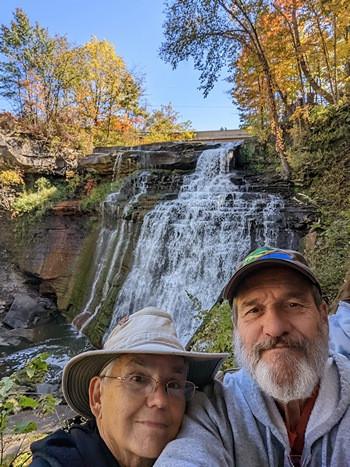 A selfie taken from the lower observation platform on the south side of the Brandywine Falls gorge.  (Cuyahoga Valley National Park, Ohio.)

First established as Cuyahoga Valley National Recreation Area in 1974, it became a National Park in 2000.  It’s 32,575 acres are just a small piece of the much larger Erie & Ohio & Erie Canalway National Heritage Area that encompasses the Cuyahoga River Valley from Cleveland to Akron, OH.

The NHA was designated by Congress to help preserve and celebrate the rails, trails, landscapes, towns and sites that grew up along the first 110 miles of the canal that helped Ohio and our nation grow.  The original canal ran 309 miles to the Ohio River. The Ohio & Erie Canalway is an affiliated unit of the National Park Service.  From the following website: 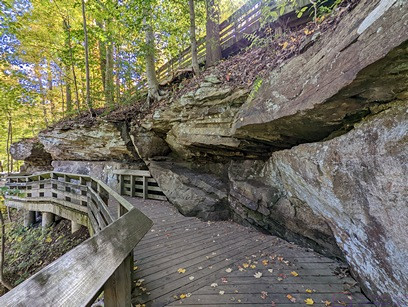 The trail on the south side of Brandywine Falls gorge was entirely boardwalk as the cliffs were very steep.  (Cuyahoga Valley National Park, Ohio.)

We left around 10:30 AM and headed west on OH-303, through the towns of Hudson and Peninsula, Ohio.  Hudson was unexpected and amazing; clearly an affluent area.  At Riverview Road we went north to the Boston Mill Visitor Center.

The parking lot was full and we did not get to go in ☹.  We drove to Brandywine Falls instead.  It was also crowded, but we got a place to park.  (The park is, apparently, always crowded on nice weekends, and a marathon was being run on the tow path as well.)  We walked and took some photos.  It was nice.  There were steeper trails available, but we passed on those. 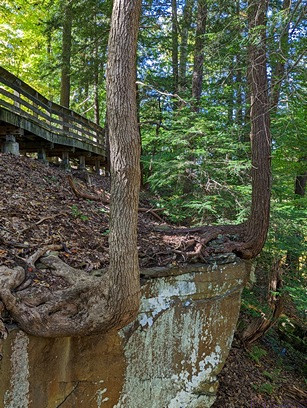 Trees are amazing, and will grow anywhere they can get a foothold with their roots.  These trees were near the start of the south rim trail to Brandywine Falls.  (Cuyahoga Valley National Park, Ohio.)

From the waterfall, we then headed towards the north end of the park to the Canal Exploration Center.  We spent time in the Information / Museum building, which was a former canal-side inn adjacent to lock #38, learning about the history of the canal system.  The lock was fully intact, including the gates at each end, both of which were open.  The downstream lock and pond had water in them.  The upstream pond was mostly grown in with reeds, but a small tickle of water was flowing into the lock chamber and on towards Lake Erie.

The rear side of Canal Exploration Center at Lock 38, towards the north end of Cuyahoga Valley National Park, Ohio.  It was a functioning inn during the heyday of the canal system, serving both travelers and local residents. 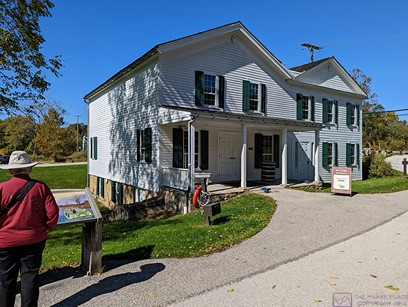 The front view of the Canal Exploration Center.  Lock 38 is just behind me.  (Cuyahoga Valley National Park, Ohio.)

Like so many places we visited this summer, there was a great deal more to do than we had time for at the Cuyahoga Valley National Park and in the surrounding area.  Hiking and biking for sure, as well as lots of history.  It was a wonderful park, and a bit of surprise, tucked in-between Cleveland and Akron, Ohio as it was.

But we had seen and done enough for a first visit.  Unlike most of the places we visited this summer, CV-NP is only a 3 to 4-hour drive from our house, so easily revisited at some point in the future. 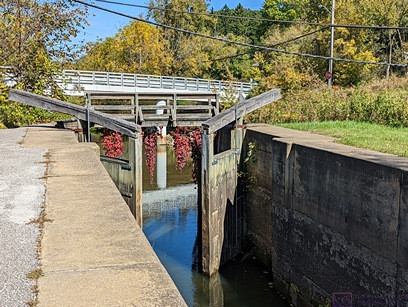 The downstream portion of Lock 38, with the gates open and the lower pond just beyond.  (Cuyahoga Valley National Park, Ohio.)

We headed south back to OH-303 and then east back towards the KOA.  On the way back, we stopped in Hudson at the ACME Fresh Market (for wine, a 2020 von Wilhelm Haus Auslese Riesling) and the Shell station (for fuel).

Back at camp, it was sunny and pleasant, so I got the two camp chairs out and then took a few minutes to put the stinger back in the truck receiver and line it up with the trailer hitch in anticipation of our departure tomorrow morning. 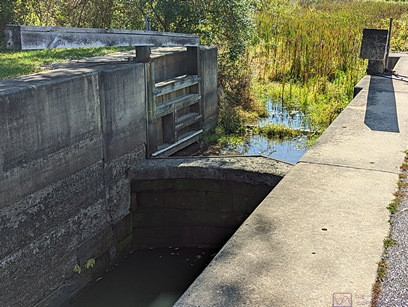 The upstream portion of Lock 38 with the gates open and the pond beyond.  The upstream pond was mostly filled in with reeds.  (Cuyahoga Valley National Park, Ohio.)

Linda prepared a couple of bowls of snacks, and we sat outside and each had a small glass of wine and a few munchies.  (The wine was really good.)  Scattered clouds eventually moved across the sun, bringing a distinct chill to air each time.  As the sun finally dropped below the tops of the trees to the west (duh) of our site, the temperature dropped along with it.  Linda went back and I put the chairs back in the truck bed and then joined her. 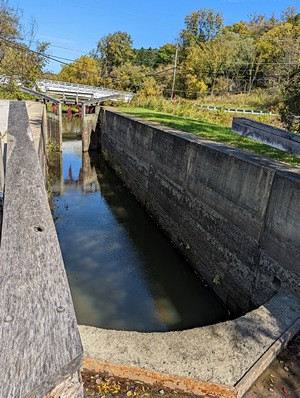 A view of the entire Lock 38 from the upstream end.  (Cuyahoga Valley National Park, Ohio.)

I copied the photos I had taken at the CV-NP from my phone to my computer and then finished the blog post for yesterday, assembled it in WordPress, and published it.  I then processed the photos from today and started working on the text for the blog post.

We had fish sticks and Daiya Mac & Cheese or dinner (both vegan, of course).  We would normally watch PBS programs on Sunday night, but did not have a usable OTA TV signal, so we streamed another episode of Star War: ANDOR and then an episode of Lord of the Rings:  The Rings of Power.  We had a second glass of the Riesling wine with some Hershey’s Dark Chocolate with Almonds.

It was going on 10:30 PM by the time the second program was done and Linda headed off to bed.  Our sleep needs and schedules are slightly different, so I doodled on my iPad for about an hour and then lowered the thermostat setting and climbed into bed.  We return home tomorrow, so this was our last “sleep” of our 117-night grand tour of Eastern/Atlantic Canada and New England.