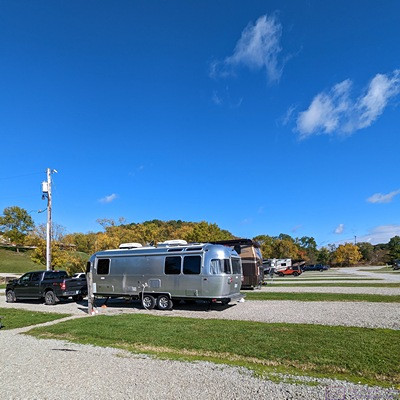 I was up at 6:45 AM this morning, a bit earlier than the last few weeks.  Juniper-the-Cat was prowling the beds looking to get someone up to feed her, even though she still had some kibble left in her bowl.  She also likes to have her water freshened, even though the bowl is not empty.  We had left the main (larger) heat-pump on last night in heating mode with the thermostat set to 60 (F) as the overnight low was forecast to be 41 (F).  The heat-pump can operate at that temperature, but is close to where it will switch into a “defrost” mode occasionally.  I was already half-awake because of the cat, and heard the heat-pump go into defrost mode, so I figured I would just get up and switch the system to the propane furnace, with is much more effective than the heat-pump below 40 (F).  As long as I was up, and put the kettle on and made a cup of half-caffe coffee.  Linda got up around 8 AM, and made her cup of coffee.

At 8:30 AM. we had a light breakfast of Linda’s homemade granola, which we managed to make the granola last the entire trip.

Today was another travel day, one of the very few times on this trip we have had back-to-back travel days.  Our destination was the Streetsboro / Cleveland KOA Holiday in/near Streetsboro, Ohio.  As with yesterday, our preferred route was almost entirely toll road, I-76 and I-80.  Our EZ-Pass is actually from Ohio, so we will sail through the electronic toll plazas with “ease.”  The Pennsylvania Turnpike (I-76) becomes the Ohio Turnpike (I-76) and then I-80 becomes the Ohio Turnpike where I-76 and I-80 meet.

Google Maps indicated the driving distance today was 136 miles, and estimated a travel time of 2 hrs. 9 mins.  Check-in time at the KOA was 2 PM.  That might have been a problem except that check-out time at Fox Den Acres was noon.  That allowed us to target an 11:30 AM departure (we almost always miss our target and pull out a bit later).  Also, the overnight low temperature was 41 (F) and was forecast to only be 45 (F) by 11 AM.  Burrr.  But we had the gloves we bought yesterday at Walmart, so we were prepared to deal with handling things in the chilly temperatures.

We  started our departure preparations in earnest around 10 AM.  We had full sun and no wind so, in spite of the mid-40s (F) ambient temperature, we were very comfortable working outside, thanks in part to our newly acquired gloves.

We had studied Google Maps ahead of time, and so I had a clear mental image of how we had to get back on I-76 W.  It was still confusing, and I thought I missed the entrance ramp to the toll road, but the road I was on also went to the entrance ramp, so it was all good.  The only other unexpected thing on or route was near the end.  We exited I-80 W and had our EZ-Pass scanned as we rolled through the toll booth and then immediately found the ramp to southbound OH-14 (the one we needed) closed.  We took OH-14 North instead, because we didn’t have a choice.  Less than mile later there was an exit and a posted detour.  We crossed over OH-14, made the left turn, and got on OH-14 South.  After that, it was just a matter of turning on Market Square Drive to cut over to OH-303 and head west to the KOA. 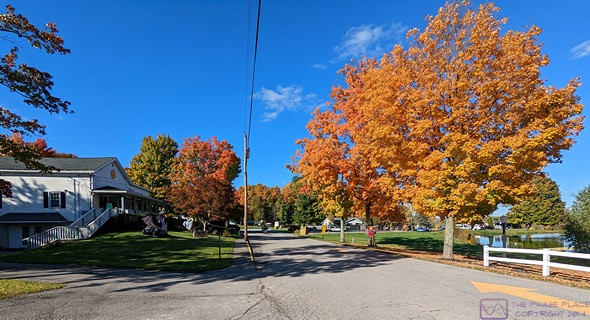 The entrance to the Streetsboro – Cleveland KOA Holiday was easy to spot, thanks to their iconic sign (large, yellow, with red teepee that looks like an X) and was wide enough for an easy turn.  Most of the campground was set far back from the road, so there was a long, winding drive to get to the registration building and access control gate.  It was just after 2 PM when I stopped and Linda went in to register us. 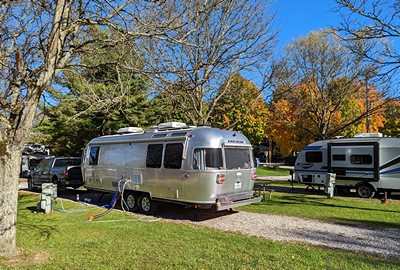 We were assigned site #507, a full hookup / 50A pull-through site in the far back of the park.  They only have 15 pull-through sites, all in this area, and it appeared that they were used for shorter-stay transient campers, like us.  The campground also had 12 cabins and 16 tent sites, two playgrounds, a swimming pool, and three lakes (two for fishing).  There were also an (uncountably) large number of back-in sites, many of which were clearly in seasonal (permanent) use.

I was able to locate the trailer on the site so that it was level, side-to-side, to within 1/4”, so we did not have to use our leveling devices.  It was about 4” low in the front, so that was easily handled by the trailer tongue jack.  Since it was early in the day, and we had no plans to leave the campground, I did a full exterior camp setup (electric, water filer/softener, and sewer).  They only thing I didn’t do was deploy the awnings, which we have not had out for many weeks now; no need with the lower sun angle and cool temperatures.

We had grilled cheese sandwiches for lunch.  Linda searched for OTA TV stations, but was not able to find a PBS affiliate with a usable signal.

The “Holiday” designation identifies the campground as a destination, not just a place to stop.  To that end, the campground, and many of the sites, were decorated for Halloween.  A sign listed all of the activities that were taking place today, including a central gathering, and hay wagon ride, and trick-or-treating from 6 to 7 PM.  It was fun to watch everyone in costume, children and adults, walking through the campground.

For dinner, we had oriental dumplings with soy-ginger sauce and corn kernels on the side.  As the sun set and the outside air temperature dropped we ran the main (zone 2) heat-pump to keep the chill at bay.  The forecasted overnight low temperature was 36 (F), so 34 was not out of the question.  As the outside air temperature approached 40 (F) during the evening, the lower limit for the heat-pump, it finally went into a “defrost” cycle.  Once that cycle completed, I switched the system to the (propane) furnace and set it to 65 (F).

After dinner, we streamed two episodes of Star Wars: ANDOR and one episode of Lord of the Rings:  The Rings of Power.  Linda headed to bed after the programs, and I lowered the thermostat to 62 (F).  I worked for a while on this blog before turning in, and lowered the thermostat again, this time to 58 (F), to keep the furnace from just running continuously all night.  The bedroom end of the trailer is always cooler than the kitchen/dining/living end.  When it is cool/cold outside, the bed is always chilly when I first get in, but I have more than adequate covers, and warm up quickly once I do.