Today was another repositioning day.  After five (5) nights at the Hersheypark Camping Resort it was time to move on.  Marilyn had been staying at Ron and Mary’s house, but it was time for her to return home as well.  Linda and I each had a cup coffee as soon as we got up.  We had toast and jam for breakfast and split our last banana. 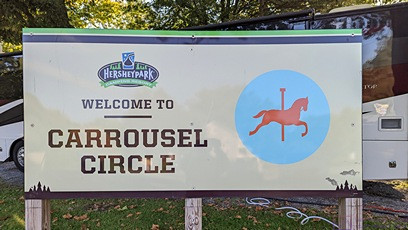 Each section of Hersheypark Camping Resort had a name.  Our section was Carrousel Circle.  It did not have a Carrousel, and was not in the shape of circle.

Because we spent all of our time here visiting with family, we never walked or drove the campground.  We like to stretch our legs before driving for hours, so we went on a short walk around the front part of the resort and I took a few photos.  Back at the rig, we were working on our final departure preparations.  Linda turned on the fresh water pump and … nothing.  Bummer.  I could hear a faint hum when the switch was on, and the hum went away when the switch was off, so it appeared that the unit was getting power.  I suspected that the diaphragm had failed, as this is a common failure on RV water pumps, but I was not going to take the time right then to diagnose the issue, and I had not repair parts with us anyway.  Linda made a note to add this to the list of warranty/repair items for the dealer when we get back.  (The trailer goes back to the dealer on October 17, an appointment we made back in May.)

Our destination today was the Fox Den Acres Campground in/near New Stanton, Pennsylvania.  The distance was 183 miles, but it was almost entirely on the Pennsylvania Turnpike, so the estimated driving time was ~3 hours.  We knew it would take longer, and figured on 3-1/2 hours.  Check-in time was 1 PM, so we targeted a 10 AM departure. 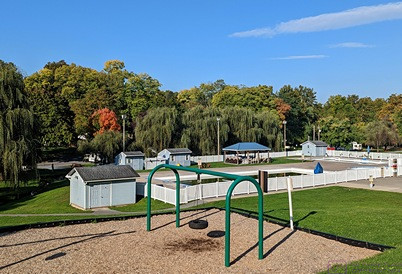 Seen in this photo is part of what makes this a resort; two swimming pools.  Both have already been drained for the coming winter weather.  There was also a lot of mature landscaping (trees), a playground, a recreation room, and a free shuttle service to the Hersheypark complex itself.

We were ready to go on time, but had to exit our site differently than we intended.  I have mentioned previously that the interior roads (at least in the Carrousel Circle section) at Hersheypark Camping Resort are narrow and the sites are short.  As a result, tow vehicles (for trailers) and towed vehicles (behind motorhomes), end up parked across the front or rear of the sites rather than inline with the main unit.  This also means that when reattaching vehicles, they are out in the street blocking traffic from getting through.  The roads are also one-way.

The camper to our left had his truck parked with the rear end protruding into the front of our site such that I could not pull out forward and get around him.  That was not a problem, however, as the sites behind us had been vacated, and I could back straight out of our site into the site behind us and then go forward to the left to exit.  As we were getting the rig ready to go, the neighbor let me know that he was leaving to go to the AACA meet, and would not be in our way.  Great!  I could just pull out after all.  But right after he left, another camper a few sites down to our left (naturally) positioned his pickup truck in front of his trailer and proceeded to hook up.  We were ready to go, so I followed ‘plan B’ and backed out of our site at 10:15 AM.  By the time we got to the stop light, at the exit from the park, and turned right onto PA-39, it was 10:30 AM. 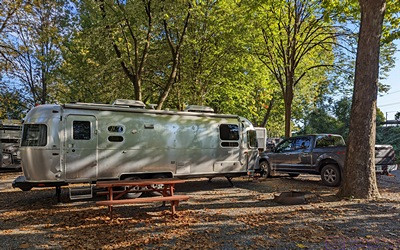 Our rig in site #200 in the Carrousel Circle part of Hersheypark Camping Resort (W3W=”suave.cleared.actor”).  This section had three rows of RV sites, all pull-through with full hookups (including cable TV) and 50A power.  The roads were asphalt and the sites were gravel and reasonably level.  It was the only section of the part with these specific features.  Other sections had back-in sites with grass, or tent sites, some sites with W/E, and some with no hookups.  The resort also had sections that were just cabins.  But our site more than met our needs, as we basically slept there at night and had breakfast there in the morning before leaving for the day and evening.

PA-39 only went a short distance in that direction (S/E) and we were very quickly on US-322 West.  This highway was posted at 50 to 55 mph, but a disabled motorhome at one of the stoplights had a lane blocked and traffic backed up for quite some distance.  I think it took at least 15 minutes to get past the restriction, but it seemed a lot longer.  I felt sorry for the motorhome owners, but a police car was positioned behind them with the emergency lights flashing, so they were safe while they waited for the tow truck.  Still, we knew the feeling of being broken down

From US-322, we took I-283 South to I-76 West, southeast of Harrisburg.  I-76 is the Pennsylvania Turnpike (toll road).  It no longer has toll booths and operates on the EZ-Pass electronic tolling system or Toll-by-Mail.  We have an active EZ-Pass transponder, so we were able to roll right along; 161 of our 183 miles were on the Turnpike.

The Turnpike was in much better condition that we remember from years ago.  It was posted 70 mph in most places, and the road surface made that a realistic speed.  I set the cruise control at 64 or 65 mph unless the maximum speed was posted lower.  That was just fast enough to allow the transmission to shift up into 9th gear and drop the engine rpm back to around 1,700 rpm.  The weather was nice initially, and it was an easy, beautiful drive through the mountains.

Between Harrisburg, where we got on I-76, and New Stanton, where we got off, there were four tunnels:  Blue Mountain, Kittatinny Mountain, Tuscarora Mountain, and Alleghany Mountain.  Atlantic Canada doesn’t bother with tunnels, they just run their roads straight up and down the sides of steep terrain.  U.S. Interstate highways, on the other hand, generally limit the grade to 6%, up and down.  After spending most of the summer in Atlantic Canada, the F-150 pulled the Airstream up and down the modest grades of I-76 with ease.  We had researched tunnel restrictions, and paid attention to the signs while driving, and concluded that we did not need to shut off our propane refrigerator to go through the tunnels.  We made it through all four tunnels without incidence.  (Obviously if we had had a problem we would have been on the evening news.)

We stopped at the Sidling Hill Service Plaza but all of the truck/RV parking was back-in, so we didn’t stop.  We finally stopped at the North Midway Service Plaza, which had pull-through Truck and RV parking, to use the restrooms and stretch our legs.  (Remember, our fresh water pump decided to fail this morning.)  Those two stops, combined, added about 20 minutes to our arrival time at Fox Den Acres Campground.

I-70 comes in from the south and joins I-76 in Breezewood.  The Turnpike carries both names until they separate in New Stanton, I-70 heading west towards Columbus, Ohio while I-76 heads NNW towards Pittsburg.  Somewhere after this merger, we finally caught up to rain, which varied from light to heavy enough that I had to put the windshield wipers on the slower continuous speed.  At New Stanton, getting from I-76 to Fox Den Acres Campground took us through one of the most interesting (and convoluted) set of highway interchanges I had even driven. 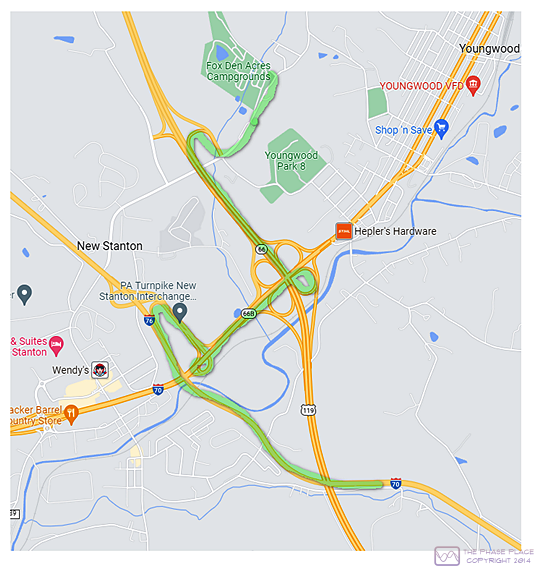 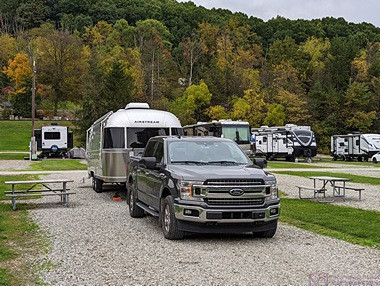 Our truck-trailer combination is 49 feet long.  Our site at Fox Den Acres Campground was long enough to hold a second RV of the same length.  I selected this angle for the photo to show the all colors on the hill behind the site.

We arrived at Fox Den Acres Campground at 2 PM.  The office was closed, but our site information was on a posted list and campground maps were available.  We were assigned site 110 in the pull-thru section (W3W = ”lifesaving.mixture.circulation”), which was mostly empty.  The pull-through sites appeared to be about 100 feet long.  Our best guess is that each site used to be two back-in sites, as there are still double water spigots, double sewer connections, and double cable TV hookups but only one electrical box, all with 50/30/20A power.

Even though we were only here for one night, we did a complete camp set up.  We had left the rain behind by the time we arrived, so we did not have to make camp in the rain.  I presumed the campground was on a well for fresh water, so this included the water filter and softener, the sewer hose, and the grey hose that we use for the black tank rinse connection.  I filled the black tank to 80% of its capacity, dumped it, and then filled it to 50%.  We have been getting false readings of 35% full after I dump the black tank, indicating a buildup that confuses the sensor, so tomorrow morning I want to get it full, dump it, refill it, and dump it again before we pull out.

When camp was made, Linda located a Walmart Supercenter in Greensburg, about 5 miles away.  We have overnight lows in the 30s (F) starting tonight, and needed some basic gloves for working outside when we break camp.  It was 3 PM when we left, and traffic was crazy heavy, on the narrow, twisty back road we decided to take.  We stopped at a Sheetz filling station in south Greensburg on the way back to camp and re-fueled the F-150.

Dinner was leftovers from last night’s meal (vegan Italian sausages with sauteed onion and red bell pepper, and broccoli) plus Wegman’s Baby Gold Potatoes (microwaved).  After dinner, I e-mailed Woodland Airstream with three additional repair items, including the water pump, and then worked on this blog post after dinner while we finished the open pack of Golden (Lemon) Oreos for dessert.  We had popcorn later while watching the newest episode of The Great British Baking Show.