Today was a travel day, taking us from Rockwood Park Campground in Saint John, New Brunswick, Canada to Hadley’s Point Campground in Bar Harbor, Maine, USA.  Our planned driving distance was 177 miles, with an estimated time of 3-1/2 hours, not including the time to get through the Port-of-Entry (PoE) at Calais, Maine.

ABIR, we got up at 7 AM, and had one cup of coffee each (mine was half-caff).  We finished the fresh blueberries and bananas for breakfast, as we could not take them across the border.  I finished off the coffee creamer as well.  We disposed of some grapes, greens and an apple.

Earliest check-in time at Hadley’s Point CG was 1 PM EASTERN time.  We were starting our drive in the ATLANTIC time zone, so we would “gain” an hour when we crossed into Maine.  Paul and Nancy used this border crossing on August 27, and reported that they were boarding every RV.  Not knowing how busy this POE would be on a Sunday, we estimated it could take 30 minutes at the border.  We targeted a 10 AM departure, aiming to arrive at Hadley’s Point CG around 1 PM local time.

As we were preparing our rig for departure, a group of three RVers walked by with their dogs and we ended up chatting with them for about 15 minutes.  They had just arrived from the U.S.  They were headed to PEI and beyond and were curious about our visit there.  One of them was from the Finger Lakes region of New York, so we were curious about what to do there.  Wine was the answer.  By the time we were ready to leave it was going on 10:30 AM.  We made our way slowly out of the campground and in less than a mile we were on NB Hwy-1 West.

It did not take long to move beyond the limits of Saint John, and the maximum speed bumped up to 110 km/hr (~68 mph) at that point.  NB Hwy-1 was a 4-lane, divided, limited access road and was in fabulous condition all the way to the border.  I set the cruise control at 64 or 65; fast enough to get the transmission to shift up into 9th gear.  We cruised along easily and comfortably at this speed for most of our last 72 miles in Atlantic Canada. 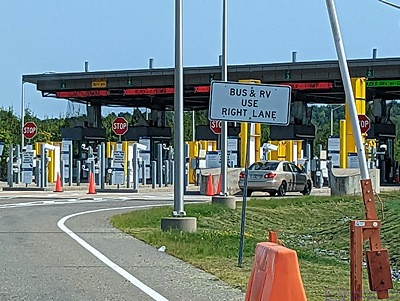 The Port-of-Entry at Calais, Maine.  Six lanes for personal vehicles.  Lane 6 (far right, not in photo) was the only one for RVs and trailers. Commercial/truck lanes were separate and far to the right
(Photo by Linda.)

The Port-of-Entry in Calais is not huge, with six lanes for passenger vehicles and RVs, and a couple of separate lanes for commercial trucks.  There were two cars ahead of us (in the RV lane) and it took 5-10 minutes before we could pull up to the booth.

The young female officer was pleasant and chatty, and was joined by a young male officer who was equally friendly.  She boarded the RV with Linda and had a quick look around, including the refrigerator and freezer.  We declared the 2,625 ml of wine we had on board, which was 625 ml over the duty-free limit, but she let it pass as inconsequential.  We were on our way after about 10 minutes, so a 20-minute total time to get through the PoE.

Our route in Maine was US-1 to ME-9 to ME-179.  ME-9 was a good, 2-lane road that rolled and curved through the heavily wooded countryside.  ME-179 was also a really good road surface that looked like it was recently paved, but was narrow with no shoulders, and was really hilly and curvy as it ran along the top of ridge.  The sights along the way were a slice of rural Maine. 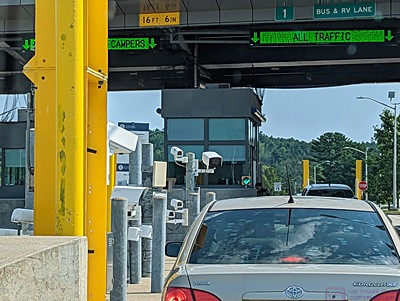 Waiting our turn in Lane 6 at the Calais, Maine Port-of-Entry into the U.S.  (Photo by Linda.)

We pulled into Hadley’s Point Campground around 1:30 PM EDT, and that is when what had been a lovely day started to fall apart.  It started with our assigned site (#24), which was right on the entrance road where RVs lined up to register, and was a back-in water/electric.  We knew all of that before we got there, but what we didn’t know was how unlevel the site was going to be.

I tried to pick the best placement for the trailer, but couldn’t get backed in.  The longer this took the less well we were communicating, and the more frustrated and, frankly, deeply annoyed we got with the whole situation.  We had leveled side-to-side and were getting ready to unhitch, when I finally determined that we would not be able to get the trailer even close to level, front-to-rear.  (I would have had to raise the trailer tongue 14.5”, which was beyond the capability of our equipment.)  IMO, this was not a usable RV site and the campground had no business trying to sell it as one.

Linda finally went to the office and explained our situation.  Even though they were “fully booked” (Linda had called while we were driving) they had a site they were not planning on using and the older gentleman, who had tried to help us get into the site, drove me down to look at it.  It wasn’t great either, but it looked manageable and I said we would take it.  (We really did not have any other options as all of the other RV parks in the area had no sites available to book.)  Since we had not yet unhitched the truck from the trailer, or hooked up any services, we did not have as much work to do to move to the new site, but it was still extra work to get the trailer ready to move again.

I had a rough idea of where I wanted to place the trailer on the new site (21 & 22) but had a really difficult time getting the trailer positioned where I wanted it.  (W3W=”trial.increments.drizzly”)  But I finally did (sort of) and we got it level, side-to-side within 1/2”, and level front-to-rear, which was good enough for the refrigerator and for our comfort.  By the time we had the rig ready to use, including 30A electric power, it was 4 PM, so 2-1/2 hours to “make camp” versus our usual one (1) hour.  It was very warm, and we were both sweaty by then.

We still needed to register and pay for our four nights here, and go buy some groceries, especially fresh fruits and vegetables.  We stopped at the office on our way out to take care of the first item.  Linda had a nice chat with the woman in the office, and let her know (politely) about the issue with site 24.  We then headed to the Edwards Brothers Supermarket in Trenton, about 5 miles back up Hwy-3.  The Market was small, but had a decent selection of the things we needed most.  We also bought a bottle of Pear wine.  Now that we are back in the States, we no longer had to be concerned about buying and traveling with wine, other than our limited storage space.

When we got back to the trailer, I hooked up our shore water equipment, which was my last setup task (we do not have a sewer connection at this site).  While I was working outside, I heard what sounded like our TV.  Linda had turned it on and found at least one usable station!  It had been a long time since we could tune in a TV station, especially in English, but I haven’t really missed it.  I finished my water task at 6 PM, 4-1/2 hours after we arrived here.  We were both beat and, frankly, more than a bit annoyed with the campground and with each other.  It happens sometimes.  We ended up having peanut butter and jelly sandwiches and Fritos for dinner, which was fine; it was quick, easy, and tasty.

The day ended on a good note, however, as we were able to get our Verizon Jetpack Mi-Fi online and use it to Facetime with Brendan, Shawna, Madeline, and Sadie.  Once we signed off, we each had a glass of the Pear wine we had just bought at the supermarket.

The rest of the evening followed its usual routine; Linda read and played word games for a while, and I caught up on some of the blogs I follow.  She managed to stay up until 10 PM, which actually felt like 11 PM, and then went to bed.  Juniper-the-cat followed her, as she does every night.  I set up my computer, connected it to our Mi-Fi, and uploaded, assembled, and published three blog posts covering the last two days.  I backed those up, and then started working on this one before finally going to bed.