Today was our last full day of our grand tour of Atlantic Canada, and our last night camping here (at least for now; we’ll be back).  Our objective for today was to visit downtown Saint John, New Brunswick, with six specific things we wanted to see or do:  1) Visit the Saint John City Market, which was established in 1876 and is Canada’s oldest Farmer’s Market building;  2) Do the Harbor Walk;  3) Visit the Stone Sculpture Exhibition;  4)  Visit the “Reversing Falls;”  5) Dine at VEGolution, and;  6) Refuel the truck for tomorrow’s drive to Bar Harbor, Maine.

But first, the usual morning stuff; cat, coffee, breakfast.  For breakfast, we toasted some of the cranberry walnut bread Rob had baked for us on Thursday.  He said it was good toasted, and he was right.  We counted and noted the amount of Canadian money we had left and decided we would try to spend it today rather than take it back to the U.S. and then try to change it back into U.S. currency.

As we were getting ready to leave for the day,  we noticed that the older Airstream travel trailer parked kitty-corner from us, was hooking up.  Chatted with the husband long enough to establish that they were from Vermont, were headed to Prince Edward Island, and their trailer was a 1965.  If properly maintained, and repaired if/when needed, Airstreams can/will last a long time in regular use, not just stored somewhere. 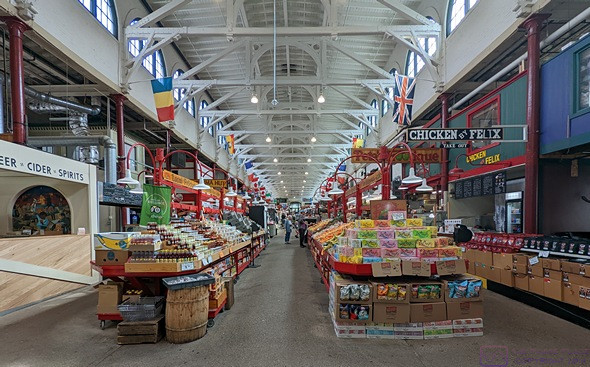 The City Market in Saint John, New Brunswick.  It was historic, and interesting to visit, but we probably would not go out of our way to shop there.

Although smaller than St. John’s, Newfoundland, and much smaller than Halifax, Nova Scotia, Saint John is still a port city built on hills with a crazy road system, and some traffic to match.  (It has the highest tides of any port on the Bay of Fundy, at 23 feet on average.)  Linda had checked online and determined that paid parking, both street and public lots, was only active from 6 AM to 6 PM, Monday through Friday.  In spite of Google Maps, we drove around through the part of town where the City Market was supposed to be located looking for someplace to park, but I had a hard time identifying lots we could actually park in.  We finally picked one on Smythe St. (???), adjacent to the Harbor Walk.  A young man parked a few spots away with his wo daughters and we asked him if we were OK to park here.  He thought so, so we went with that.  Not being familiar with the City, I used What 3 Words to mark the location of the truck. 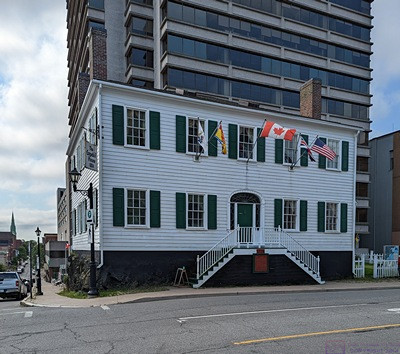 The 1810 Loyalist House is the oldest surviving example of the type of houses built by the some of the wealthier Loyalists who fled to the Saint John, New Brunswick area after the American War of Independence.  Some 150,000 people left the new United States in the years following the end of the war and formation of the republic.  It is a National Historic Site managed by Parks Canada.

We were a bit of walk from the Market, which Linda located on her phone.  We walked to where we thought it was supposed to be, but were obviously in the wrong place.  It seemed that this part of downtown had a lot of “Market Squares,” which were not the City Market.  We were in a nice place, however, as we had stumbled upon the restaurant district.

A young woman saw us looking at our phones and stopped to see if we needed assistance.  As it turned out, we were close to the City Market.  We she led us back to the next intersection, where she gave us the final directions (up that hill to the light and then left).  She was carrying a small, boxed wedding cake, so it was especially nice of her to take the time to help us out.

The City Market is still in its original building, which was old and kind of cool, but the market itself was a bit underwhelming.  There was only one vendor selling fresh produce, several butcher shops, a few fast-food stalls (which looked interesting), and some artisan booths (although much of what was on offer did not look handmade, and likely came from places far away).  But our perception of the place was, no doubt, colored by the fact that we went there not intending, or even able, to buy anything.  We were not collecting things to bring home at this point, and we had to eat or throw away any fresh fruits and vegetables still in our refrigerator before we re-entered the U.S. tomorrow.  (Meat (all kinds), eggs, and dairy would also be a problem at the U.S. border, but we don’t have any of that.) 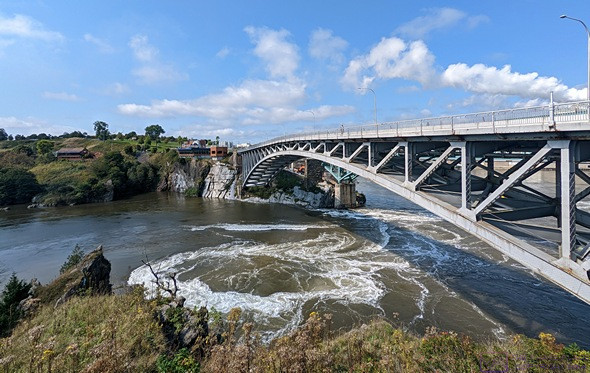 We arrived way too late to see the Reversing Falls actually change direction, but it was still interesting to be there and see what was happening.  Our understanding is that the change in height of the falls/cascade is less than the average tidal swing, so as the tide comes in, it backs up the water and makes it flow in the opposite direction.  For the entire time we were there (half hour before to a half hour after high tide) the river both above and below the Falls, was flowing upstream.

High tide in the Saint John Harbor was at 12:25 PM today.  It was 11 AM so we decided to go see the Reversing Falls.  We walked back to where the truck was parked and picked up the Harbor Walk, rather than move the truck.  It was ~2.2 miles (~3.5 km) to the Falls, plus the 1.3 miles we walked to get back to the truck.  The Harbor Walk is a very nice, paved path that is colored faded red, but we were hoofing it to get to the falls, and arrived at noon.

Actually, the Harbor Walk was very nice right up until it ended, which was 0.9 km (~0.56 mi) from the Falls.  The rest of the walk was on a sidewalk along a very busy street with high-speed traffic.  Part of that final walk was on Ocean Steel property.  Saint John is a working port and commercial/industrial town.

Once we reached the Falls, we realized that we had mis-calculated when we need to be there to see the water flow uphill, which was starting 3-1/2 hours before high tide, or 9 AM today.  We stayed at the viewing platform for an hour, expecting to at least see the flow reverse and start flowing back downstream, but when we left the current was still strongly upstream, at least in the center of the River.  We did see several seals, however, fishing in the River below the Falls.  The only information we could find indicated they were probably Harbor Seals, but they looked bigger than that to me.  I also had a long chat with a woman from Ottawa who was headed to PEI and the Nova Scotia and Newfoundland with her family.  It was a delightful interaction. 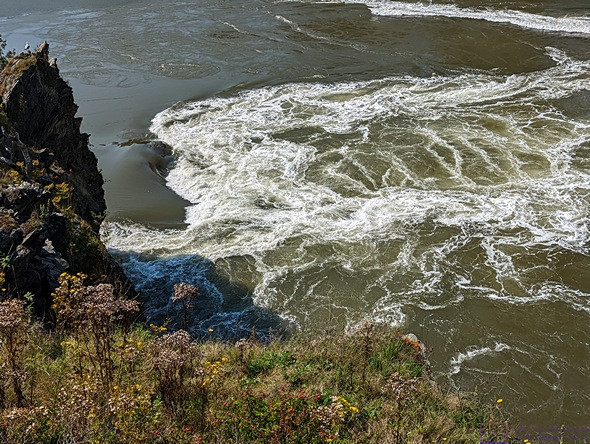 The interaction of water trying to flow in opposite directions created waves, and whirlpools, and sometimes gave the appearance of boiling.

We took a more leisurely pace on the walk back and stopped to view the sculptures that are installed along the path, some of which were from previous New Brunswick International Sculpture Symposiums. The Sculpture Exhibition which was, conveniently enough, in a specially fenced area adjacent to the path and very close to where the truck was parked.  The sculptures were all contemporary/abstract and carved out of granite, and will be the latest additions to the International Sculpture Trail, which runs along SE New Brunswick and Maine from Calais to Deer Island.

The New Brunswick International Sculpture Symposium started in 2012, and has been held every other year except for 2020.  The Schoodic Woods International Sculpture Symposiums were held seven (7) times from 2007 to 2014.  Of the eight sculptors whose work was on display today, only one was Canadian, and none were from  the U.S.  The Trail runs for over 300 miles and currently has 64 sculptures on public display.  The 8 sculptures we saw today will bring that up to 72.  Sculpture Saint John is the organization behind the New Brunswick Symposiums, and all of the sculptures at done from granite. 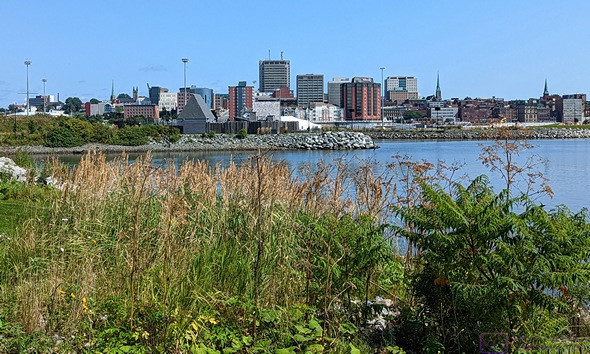 A view of downtown Saint John, New Brunswick, from across the Harbor while walking along the Harbor Walk Trail on our way back from viewing the Reversing Falls.

From the Sculpture Exhibition, we walked back to VEGolution, two doors up the hill (everything here was up a hill) from the City Market.  With perfect hindsight, we should have done the Reversing Falls first, then the Sculpture Exhibition, then the City Market and finally the restaurant.  But it was all OK.  It was nice day, weatherwise, if a bit warm, and we got in a lot of steps.

We wanted to eat out one more time before we left Canada, and Linda had found VEGolution on a Google search.  The fact that it appeared to be the only vegan restaurant in town, made it the obvious choice.  We got there around 2:30 PM.  It was not an upscale place (very few vegan restaurants are) but it was nice enough.  Their breakfast menu was still available until 3 PM, and the French toast was very tempting, but we both ended up ordering the Vegan Donair with a Caesar side salad.  Both were excellent.  We paid the bill with the last of our bills and “twonies,” leaving us with under 4$ in Canadian dimes and nickels. 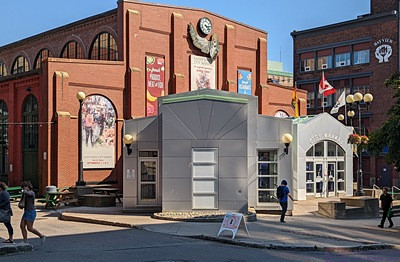 The front entrance to the City Market building.  This was taken mid-afternoon when we walked back to this part of town to have linner at VEGolution, which was a few doors to the left of this frame.

We walked back to the truck and did a Google search for Irving fuel stations.  There was one less than a mile away and on our route back to Rockwood Park, so I drove there and topped up the tank.  In a day of “final things,” this was the last gasoline we would buy in Canada, and the last fuel we would buy measured in Liters, at least for the foreseeable future.

Back at camp, Linda reported that she ad 14,462 steps on her FitBit.  That’s roughly 7 miles based on her normal walking stride.  It had been a good day, but a lot of walking in bright sun and temperatures in the mid-70s (F), and we were a bit tired.  We just relaxed for a bit and eventually took naps for about 60 minutes.  We had a couple of the vegan chocolate chip cookies we from Rob.  As the sun set and it cooled off, we had some hot tea (orange pekoe decaf).  We eventually finished the bottle of Bodacious Smooth Red wine, another thing out of the refrigerator that we won’t have to deal with at the U.S. border.

Our trip tomorrow will take us the 116km (~72 mi) to the west terminus of Hwy-1 and the U.S. Customs and Border Protection Port-of-Entry at Calais, Maine.  From there, it will be another 105 miles to Hadley’s Point Campground, near Bar Harbor, Maine for a total of = 177 miles.  Google Maps estimates 3 hours and 20 minutes for the trip, but it will likely be closer to 4 hours, not including whatever time it takes to get through the Port-of-Entry.  We “gain” an hour at the border as we leave Atlantic Time Zone and enter the Eastern Time Zone.  We planned to pull out of Rockwood Park Campground at 10 AM local time (9 AM Eastern), which should have us in Hadley’s Point by 2 PM.  Earliest check-in time is 1 PM, so that should work well.  There was no threat of rain during the morning, so we deferred all of our departure preparations to tomorrow morning.