I texted our barn builder, Chuck, today to get an update on the project and requested a photo of the interior stairs that lead up to the storeroom above the shop.  I got back six photos, which was great.  What wasn’t so great was that the stairs were enclosed with plywood from the hand rails all the way to the floor.  My design drawings clearly showed the area under the stairs as open, and the handrails supported by spaced verticals.

I was counting on the open space under the stairs for storage and possibly work surface(s).  I communicated that back and Chuck said they could do that.  He described this as “outdoor deck style” stairs.  He also indicated said the shingles were staged on the roof and ready to install as soon as the sun tunnels came in, which he expected to be very soon.  It will be great to finally have the roof sealed against the weather.

I have not seen photos yet of the interior of the shop or the storeroom, but there isn’t much light in there at the moment.  What I could see, through the opening for the door to the shop, was that it had not been spray foamed yet, but I wasn’t expecting that to be done at this stage.  The front entry door, the shop door, and the storeroom door are not installed yet either.  The building appears to be coming along nicely, but still has a ways to go to be finished.

The only real issue we have at this point is a mix-up on the two large bay doors and the cost associated with getting it straightened out.  It appears that Chuck costed out the project based on “overhead” (folding garage style) doors, even though my drawings clearly show roll-up doors, and we specifically discussed this at the beginning of the project (chain drive initially, but the ability to add motors later when we have electricity in the building).  The cost difference is $6,000 and it appears we have a difference of opinion as to who is going to cover that added cost.  We have just exchanged text messages so far, and have not had a chance to discuss this on the phone yet, but the issue is there and needs to be resolved.

Anyway, here are the photos of the stairs as they existed on the date of this post: 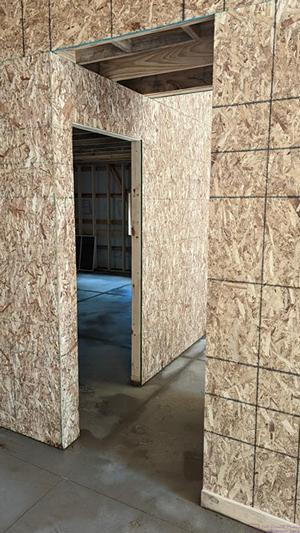 The view into the shop door opening (under the staircase landing) from the large/west RV bay. 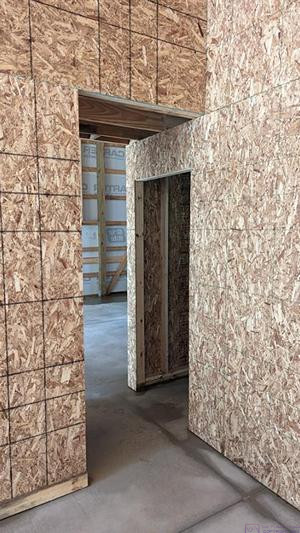 View of the shop door opening from the small/east RV bay.  The fully paneled construction of the staircase is evident. 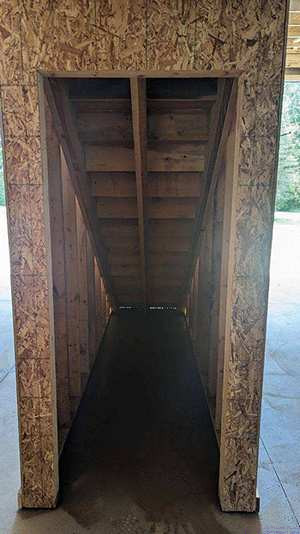 The view of the area under the staircase.  Dark and essentially inaccessible. 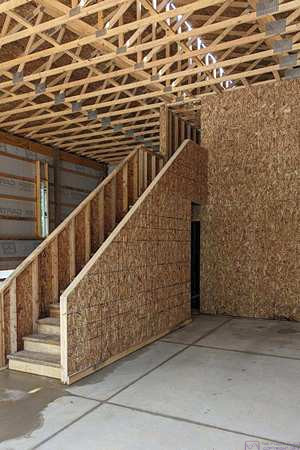 The staircase up to the storeroom above the shop as seen from the small/east RV bay. 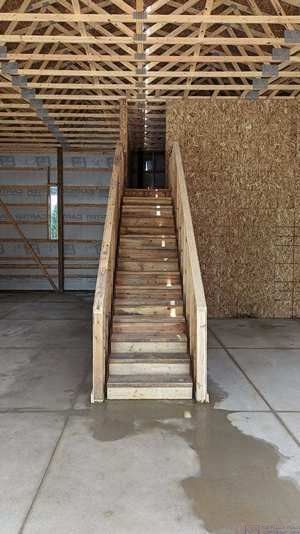 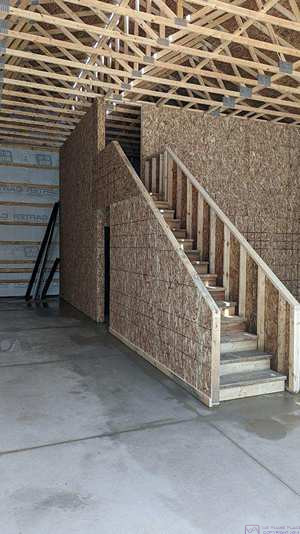 The staircase up to the storeroom above the shop as seen from the large/west RV bay.