We got up with the sun, watching it rise above the land and trees directly behind the trailer.  The temperature had dropped into the lower 50’s (F) overnight, so I ran the furnace just long enough to take the chill out of the floor.  I also turned on the gas burner for the hot water heater.  For all the arguments against propane, it really does allow an RV to be useable without much, or even any, external AC power.  There’s not a lot we can do on a 15A electrical hookup; mostly it runs the refrigerator, the battery charger/converter, and some lights, plus the control circuit for the hot water heater.  And during daylight hours, especially if it’s sunny, the solar panels and charger can keep up with those loads.

Even the electric kettle—that we use to boil water for coffee, tea, or other uses—draws enough power to risk tripping a 15A circuit breaker.  The breaker for our guest outlet was in the house, and we did not want to risk tripping it, so Linda boiled water in a pan on the propane cooktop.

We had coffee while we doodled on our iPads.  For breakfast, we had some of the wonderful cranberry walnut bread that Rob gave us yesterday.  We then got dressed and took care of some of our departure preparations before sitting outside on the patio in the warm morning sun with our tablets.  Rob came out and we visited with him for a while (Sheila had already left for work).

Our departure preparation was a bit easier than usual, as we did not unhitch yesterday or hook up the water filter and water softener.  We aimed to pull out at 11 AM for the short drive to Rockwood Park Campground in Saint John, New Brunswick, which allowed check-ins starting at 11:30 AM.  We actually left at 11:15 AM and were registered and in our site by noon. 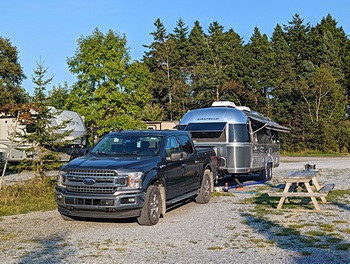 Our rig in site 101 at Rockwood Park Campground in Saint John, New Brunswick.

Site 101 (W3W=”exacted.labs.lanes”) was at the north end of row where most of the sites were back-in from both sides.  Site 101 was a single site, so I was able to treat it as a pull-through.  It was not level in either plane, but I was able to position the trailer so it was only 1.25” low on the passenger side; easily corrected with our Andersen roller levelers.  It was 5.25” low in the front; easily adjusted with our equipment.

It was obvious that it used to be two sites, as there were four (4) electrical outlets on the pole and four water connections, but only three (3) sewer connections.  The electric and water setup was very strange; if four rigs had been parked here, two of them would have had their utility connections on the wrong side.

When I plugged into what I presumed was the 30A electric outlet for our site, the Hughes Power Watchdog EPO immediately threw am E07 error code.  I called the office to them know there was something wrong with the outlet and “discovered” the other three.  I plugged into each one, and they were all fine, so I let the office know that we would be OK.  The young lady said she would let the campground manager know, and he showed up about 10 minutes later.  Linda looked up the E07 code and it was “Missing Ground.”  Yup, that’s a problem, but it was only that one outlet, so I shared that with the manager.  Probably the ground wire had come loose or the connection had corroded, although the open could also be in the distribution/breaker panel.

We finished setting up and then tried to connect our iPads and phones to the park Wi-Fi before the park manager arrived to look at the electrical issue, but there wasn’t any.  He said it was down and he was headed to the laundry building next (at the south end of our row) to try and get it back online.  But he admitted that even if he was successful, it was “wonky” (his word).

With our return to the U.S. just a couple of days away, we took stock of our Canadian Money.  We thought about converting back to US dollars at the currency exchange at the border, but decided it made more sense to just spend it.  We headed to the Sobeys in the new East Point complex and discovered a Costco there as well.  We hit Costco first and then Sobeys.  We only bought processed/packaged items; nothing fresh.

Everywhere we saw flags they were at half-staff for the passing of Queen Elizabeth II, although apparently they were raised temporarily to mark King Charles’ III accession to the throne.  Linda read about “The London Bridge Protocol,” which went into effect upon the death of Elizabeth II.  Basically, who does what and who says what to who in a detailed and highly orchestrated manner.

I exchanged text messages with our barn building, and got some pictures of the stairs that go up to the storeroom about the shop.  (See separate update post from this same date.)  I also exchanged text messages with Busnut Bill, who sent a photo of the twin grandsons sleeping next to one another.  So precious.  He and Karen are headed the U.S. on Sunday as well, returning to Jellystone RV Resort in Frankenmuth as then have done every fall for years (except during the COVID-19 pandemic).  They return to Ontario on October 9th, the day before we get home, so we will miss them on this visit.

Dinner was angel hair pasta with the usual preparation of onions and garlic sauteed in olive oil, and then sun-dried tomatoes and greens added in and heated through. While we were out shopping, I got a BDW stay request for our host site for 5 nights starting October 13, and needed to deal with it before too much time went by.  It was from a guest who had stayed with us in 2019.  Our BDW host site calendar is open as of October 12, so after dinner I accepted the request.  It will be a bit inconvenient, as our bus and trailer will both be there, but we will make it work, as we have before.  I am hopeful that we will have the bus in the new barn, although without electric power to the building, I will have to disconnect, and possibly remove, all of the batteries.  Another possibility is to put our guest down there, as their rig is capable of being off-grid, and apparently they use it that way quite a bit.

I also wanted to leave a reference for The Lake House, but couldn’t do it using the Harvest Host app on my iPad, or at least could not figure out how to do it.  I connected my laptop computer to the hotspot on Linda’s phone, and was able to log into the HH/BW website.  Even then, it took me a long time to figure out how to leave a reference/review, but I finally did. 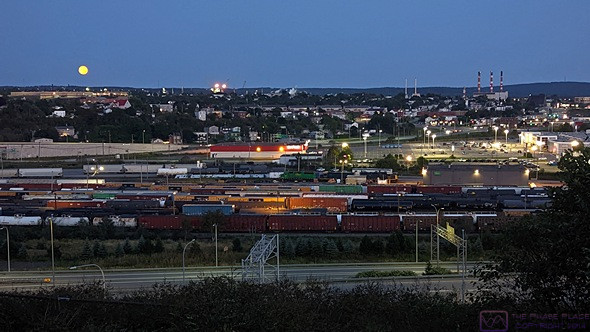 We were near the eastern edge of the Rockwood Park Campground, which is atop the distant ridge east of the valley, chatting with a few other RVers when Linda noticed the moon break above the ridge farther to the east.  It came up quickly and full, and was a brilliant orange as the sun had just set.  This photo does not do justice to what we actually saw.

After dinner we went for a walk through the campground.  The 1/2 of the campground we were in is basically a big gravel parking lot with hookups.  But that was OK with us, and is often preferred by RVers who need to access satellites for Internet or entertainment.  The other half, to our east, is mostly sites carved into the woods.  Some were ‘no services,’ and the others were ‘water and electric.’  About half of them were tent sites, all of which were empty. 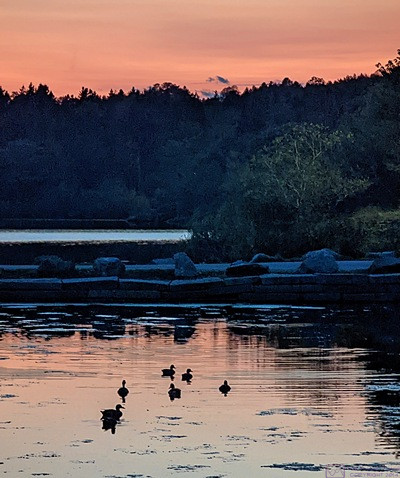 Even though it was now dark, we continued our walk up to the Lilly Lake Pavilion on Lilly Lake, near the entrance to the Park and campground.  The water was calm and there was a nice glow from the sunset backlighting some ducks.

We came upon three people chatting, a couple and another woman (whose husband was still in their van).  We joined the conversation, and found out they were all from California but had no prior association before getting to Rockwood Park.  They both had class B van conversions that looked like they could go places we would not be able take the trailer.  One was a self-build and the other one was a Mode 4×4 made by Storyteller Overland.  It was on the 4-wheel drive Sprinter platform with a raised suspension for greater ground clearance.  It also had side “pop-outs” that allowed the beds to go across the width of the body side-to-side.  Both vans were also crossing back into the U.S. on Sunday.

Back in our trailer we spent what was left of the evening reading, writing, and processing photos before going to bed.  Our plan for tomorrow was to visit downtown Saint John.  The city itself is ~150,000 people and the greater metro area is ~250,000.  Big by Atlantic Canada standards, but about the same population as Ann Arbor, Michigan when the University of Michigan is in session.