(I forgot to mention in yesterday’s post that, in addition to the 21 airstreams in the Maritimes Caravan, which included the one parked two sites down from us, at least 10 other RVs had pulled into or section of the Ponderosa Pines Campground.  So, what looked like the end of their season yesterday morning, looked much different by dinner time.)

We were awake just before sunrise and actually watched the sun appear above the high land on the other side of Chignecto Bay to our east (obviously).   The sky was clear and crisp as the overnight low temperature was 52 (F).  We had the zone 2 heat-pump set to heat mode, with the thermostat set to 62 (F), so it came on a few times during the night.  I bumped the temperature up to 65 (F) when I got up.  When it cycled off, I switched it to furnace mode, which uses propane, to heat up the belly pan around the tanks and floor.  Once the trailer was warm enough we turned the furnace off.

Today was a travel day for us, so we each had a cup of half-caffe coffee and doodled on our iPads for a bit.  Breakfast was homemade oatmeal with bananas, blueberries, and oat milk.  We targeted a noonish arrival at our next destination, and planned to pull out of the campground by 10 AM.  I was outside by 9 AM, taking care of my departure tasks, when a couple walking their dog (smallish chocolate brown standard poodle) eyed the Airstream and stopped to chat.  They were part of the Airstream Maritimes caravan, and it turned out that our neighbors (two sites down) were too.  All of the people in the caravan were members of the Airstream Club International (ACI) / formerly known as the Wally Byam Caravan Club International (WBCCI).  We are too, and I enjoyed chatting with them for about 20 minutes.  Linda came out and joined the conversation for the last 5 minutes, but I think her real intent was to get me back on task.

Even with the interruption, we were ready to go by 10 AM, and actually pulled out of the campground at 10:11 AM.  Our destination was The Lake House, a Boondockers Welcome host site near St. John, New Brunswick.  It was a relatively short drive of ~180 km (~112 mi) that took about 2-1/4 hours.  Our route was Hwy-114 through Fundy National Park (Parks Canada) to Hwy-1 towards Saint John, New Brunswick, and then down Hwy-111 towards the airport, followed by a few miles of smaller, residential roads.  All told, we were only on six different named roads, which made for easy navigation.

Hwy-114 was the now familiar winding/undulating 2-lane road through the countryside.  It was never posted higher than 80 km/hr (~50 mph) and was slower through villages and construction zones.  The initial portion within Fundy NP was posted 50 km/hr (~31 mph), but eventually went back up to 80 km/hr.  The northwest portion the Park/road was new for us, and there were some long, steep grades.  It was a mostly-to-very-good road surface, and traffic in our direction was light to non-existent, so it and was fun and relaxing to drive.

Hwy-1 was a 4-lane, divided, limited-access freeway posted at 110 km/hr (~68 mph).  It was in very good condition, and we made up some time with the cruise control set at 65 mph (~105 km/hr).  It wound through a valley of sorts, with wide curves, less steep grades, broad shoulders, and a right-of-way that was wider and more cleared than we had seen in months.  Although the surrounding terrain was still hilly and tree covered, it looked and felt more like a U.S. Interstate Highway.  We were still 48 km (~30 mi) from Saint John, when we started to see larger businesses (including agricultural), followed by small communities, and eventually residential neighborhoods. 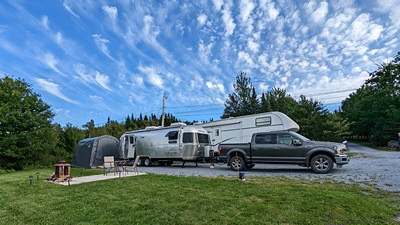 Our travel trailer in the guest site next to our hosts’ 5th wheel trailer.

We found our destination and parked along the side of the road.  Rob (our host) was mowing the grass and stopped to welcome us and help us back the trailer into the guest parking site.  I will have to describe this as I will not be posting any photos.  Also, I cannot share our What 3 Words descriptor.  That would tell your EXACTLY where this host is located, which is not allowed as a matter of policy, but also just plain common sense.

The guest site was next to their 5th wheel trailer and perpendicular to the entrance/driveway, not that far off the edge of the road .  The driveway entrance was on the left, with the RV sites to the right, so he had me go to the cul-de-sac at the end of the road, turn around, and approach from the other direction.  I did the “swoop” to set the trailer up to for backing in.

With a lot of directing from Rob, and spotting from Linda, I managed to back the trailer around to the passenger/right side into the driveway, and then around to the driver/left side, just past the front/right corner of their 5th wheel, and into the spot.  The trailer wasn’t quite straight in the site, and the truck wasn’t lined up with the trailer, so I pulled forward and the right (ABIR) to get the truck and trailer aligned, and then backed straight in.  I left the rear bumper of the trailer about 5 to 6 feet short of the farthest back it could go until we had determined what we needed to do to get level.

Our LevelMatePro+ indicated we were ~1.25” low on the left/driver side and ~4.50” low in front.  I noticed that the left side trailer wheels were in a little low spot, but the rear wheel was going to start going up if I backed up a bit more.  We placed one of the Andersen rocker levelers behind the left/front tire and I backed up until the LevelMatePro+ indicated we were level side-to-side. 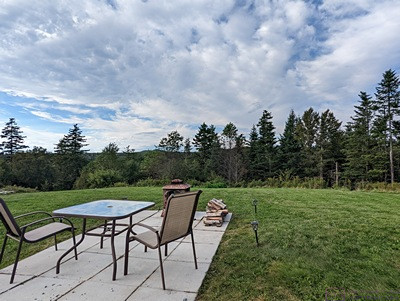 The guest patio, lawn furniture, and firebox, as seen from our rig.  The lake is beyond the trees and down the hill.

We were only going to be here for one night, and had no plans to go anywhere while we were here, so we did not disconnect the F-150 from the trailer.  We always use our Andersen tongue jack stand unless the trailer is on a forward upslope and we have to lower the tongue to get level after disconnecting the truck.  Nine times out of 10, it’s the opposite, and we need the jack stand for the added height and stability.  I was able to lower the jack stand extension tube to the 3rd hole, which allowed me to raise the trailer tongue without excessive extension of the main tube.  We chocked the tires and put down the stabilizer jacks on the trailer, but did not install the X-Chocks.

I took care of the utility hookups while Linda straightened up the interior and got lunch ready.  Rob had a 15A electric power connection available, so I dug out the necessary adapter cable.  The water was from their house plumbing, so I skipped hooking up our filter and water softener and connected to it directly.  No waste dump here, of course, as that is a very rare amenity at Boondockers Welcome locations.  We will take the waster water with us to our next campground, tomorrow.

When we were done setting up, Rob came over with a “welcome package.”  It had a manila folder with information and flyers about services and things to do in the area.  He also had a package of 13 homemade chocolate chip cookies and a beautiful loaf of cranberry walnut bread.  Both of them were vegan, and he had baked them himself.  The bread was still warm.  Shelia also follows a vegan diet, but Rob knew ahead of time that we were as well, and had adapted his usual recipes for us.  Linda and I would like to think that we are good BDW hosts, and that our guests have enjoyed their stays on our property, but we do not bake fresh bread for our guests.

While the day was unseasonably warm at 74 (F), it was not warm enough to require air-conditioning.  Good thing, too, as we were on a 120V/15A service.  Besides, this is Atlantic Canada and there is always a breeze.  We opened the windows and turned on the ceiling exhaust fan. 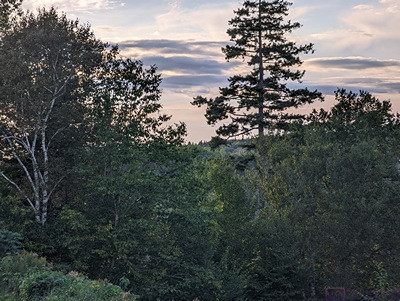 The view to the northwest from the guest site in the early evening.

Lunch was salami and cheese sandwiches with greens, along with a peach and some veggie straws.  It was a beautiful day, so we sat outside on the guest patio and lawn chairs, and connected our phones and iPads to the guest Wi-Fi.

I poured us a couple of glasses of Bodacious Red wine and cut a couple of slices of the cranberry walnut bread.  Rob finished mowing the yard and then chatted with us for a while.  Sheila was at work but we got to meet her and chat for a bit when she got home.

Besides being convenient to our route through the Saint John area, we had booked a stay here because we had never really used our guest privileges, which we earned by being an active host.  But mostly, I wanted the meet Rob.  We were both active in the Boondockers Welcome Facebook group, and his comments/replies, along with a handful of other hosts, comments resonated with our hosting experiences and viewpoint.

Another weather feature of Atlantic Canada is that the air temperature goes down with the sun, and that was true here as well.  We thought Rob and Sheila were going to come back out and visit or a bit—we sat out long enough to watch the sun sink in the western sky—but they didn’t.  And that was fine; socializing is not an obligation of either hosts or guests.  We finally retreated to the trailer to escape the advancing chill, shut most of the windows and the door, and turned on the propane burner on the water heater.

We ate dinner at 7:30 PM.  We had the last two smoked sausages and buns, with grilled onions and mustard.  We split the leftover ear of corn, had a few bread & butter pickles, and split a can of orange Bubbly water.  After dinner, Linda had a call from Diane.  They caught up on each other’s family happenings and compared notes about what they had been reading.  The rest of the evening was quiet. It was very dark here, and very quiet towards the end of this dead-end road.  I copied the photos from my phone to my computer and processed them.  This post was done before 11 PM, so I went ahead and published it.