(This post has 11 photos from the last three days, including today.  They were all taken with my Google Pixel 6 Pro smartphone.  They are distributed throughout the text, with captions, in chronological order.)

I was in bed last night just after 11 PM, so I was up this morning at 6:45 AM.  I arose to clear skies and lots of pre-sunrise light.  The hills on the east side of Chignecto Bay were shrouded in fog but our side, and the Bay itself, were clear except for a little fog over the small private pond to our north.  We planned to stay in camp today and take care of small tasks and just relax.  Beautiful weather was on tap for today, but that would make for a nice “camp day” too.  The next four days will be a bit less relaxed as we move the trailer on Thursday, again on Friday, and again on Sunday.  The Sunday move will also involve re-entering the U.S. via the Calais, Maine Port-of-Entry. 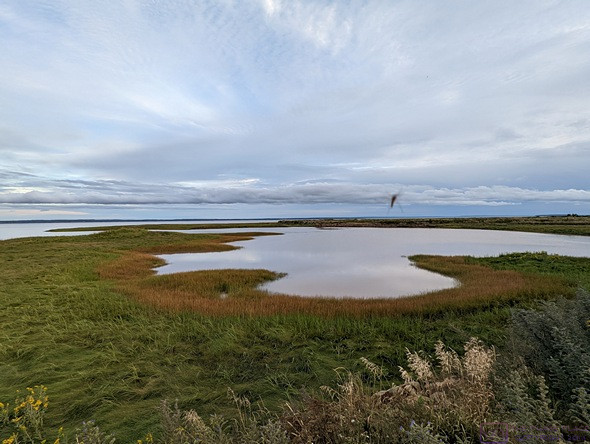 The southern-most road in Ponderosa Pines Campground winds around to the south and then west, where there is a sign for the Strawberry Trail.  The trail runs out a long way on top of an earthen dike that separates the salt marsh from fresh water ponds and agricultural land.  We went part way out with Laurel after dinner, but did not stay long due to the mosquitoes.  I managed a couple of photos on my phone.  This is the view looking east, with the tide well in, but not yet at the high mark.  The smudge, center-right, is a mosquito.

The outside air temperature was 49 (F), and the sun was just about to rise, so I went out and checked/adjusted the tire pressures on the truck.  The front/steer tires were both at 40.5 psi and I lowered them to 39.0.  39 psi is the specified pressure for maximum load on all four tires, but it’s not completely clear why the front and rear tires have the same specification, as the GAWR of the drive axle is quite a higher than the steer axle, suggesting that the front tires are at a higher pressure than needed.  And, I know that when the trailer is connected to the truck, a little bit of weight comes off of the steer axle, even after the weight-distribution bars are set.  My best guess is that Ford Motor Company made a marketing decision to just specify all four pressures the same, and at a high enough level, to minimize underinflated tires. 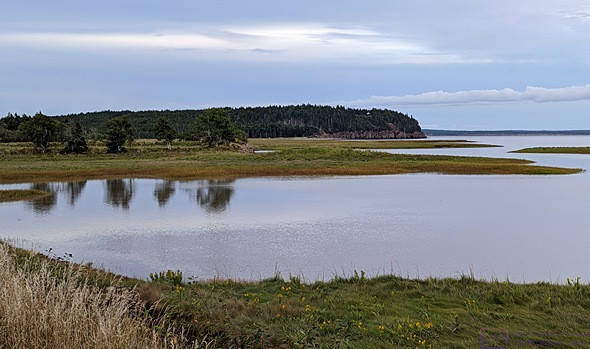 The view is looking north from the dike south of Ponderosa Pines Campground.  The forested headland and cliffs in the distance are Hopewell Rocks Park.  High tide was still an hour or two away.

The Wi-Fi/Internet connection was wonderful, of course, because there was almost no one here to use it.  We updated apps on our phones and iPads and then played a few games and worked a few puzzles while we had our coffee.  Being a camp day, Linda made scrambled eggs (Just Egg), ‘bacon’, and toast for breakfast.  I like camp days.

After breakfast, we set up our computers and got them ready to use.  Anytime we have a camp day, Linda works on entering credit card receipts into Quicken and reconciling them with our bank activity.  I deal with e-mail, and work on blog-related stuff (photos, writing, and sometimes online research) or take care of other special tasks. 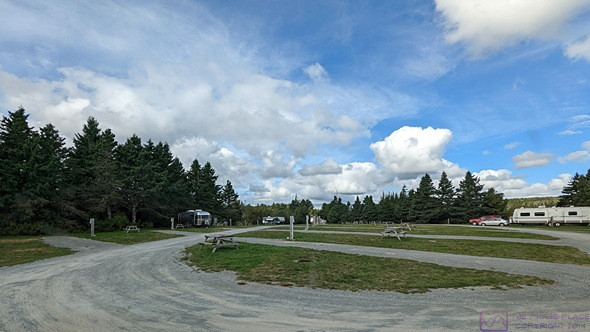 Our section of Ponderosa Pines Campground yesterday around check-out time was almost empty.  (Looking west from the east end of the section.)  The rest of the campground was similarly empty, and the few rigs by the entrance appeared to be seasonal sites with no one around.

My special task was researching, and possibly contacting DTE Energy (our electricity utility at home), so start the process of finding out what the process is (might be) for getting power to the new barn.  I got as far as looking stuff up on the DTE website, but that was it for today.

Another shot from the east end of our section looking west, this time a panorama.  There are three RVs visible in this photo.  A fourth one is out of the frame behind the camera to the left. 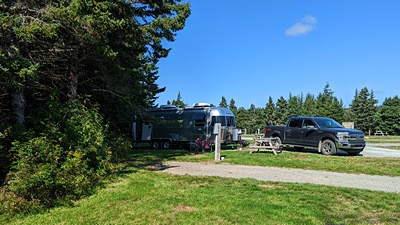 Our truck and trailer in site 306 at Ponderosa Pines Campground, Hopewell Cape, New Brunswick.  The site faced NE and the tree line behind the site provided shade from the sun, now following a lower arc across the sky.

One of our tasks for today was haircuts, and we wanted to get that done while it was still cool outside, and hopefully avoid the mosquitoes.  Linda decided that the longest guard for our clipper was too short at 1”, so I was the only one who got a haircut.

Linda used the 5/8” guard, and did my beard as well.  The salon treatment done, I finished the trimming and shaved before taking a shower and getting dressed to face the rest of the day.

Linda followed in turn, and then cleaned the shower and floor.  The cat really makes a mess of the floor by getting her paws wet and then using her litter tray.  We have some mats out, but they don’t catch everything.  It bugs Linda, so she sweeps the floor multiple times a day, and mops it about once a day.  Fortunately, it appears to clean up fairly easily. 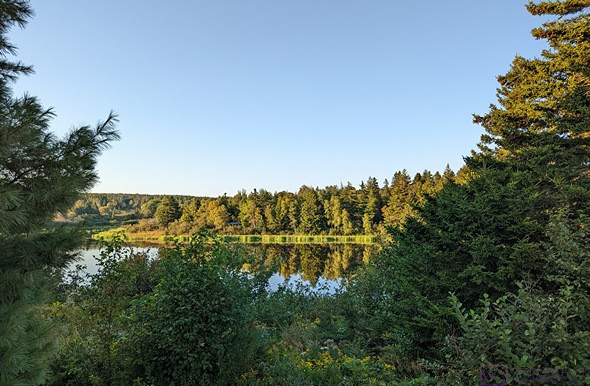 We went for a walk after dinner today (Wed 30 September) and saw the private pond north of the campground nicely lit by the setting sun.  The water was flat-calm, the first time we have seen water that produced a clear reflection in a very long time.  Most of our time in Atlantic Canada the wind has kept the surface of bodies of water disturbed.

Even though the official end-of-season here at Ponderosa Pines Campground is October 14, it looked like it had already arrived.  There were only four RVs in our section this morning.  Another one pulled in while I was taking the trash to the collection cans and walking our section of the campground to get a few pictures of how empty it was.

Just before noon, we heard a strange, scraping sound.  A quick look around and we spotted the tractor dragging the gravel road leading into our section with a “box blade.”  With campground basically empty, it was an obvious time to cut grass, grade roads, and do other such maintenance. 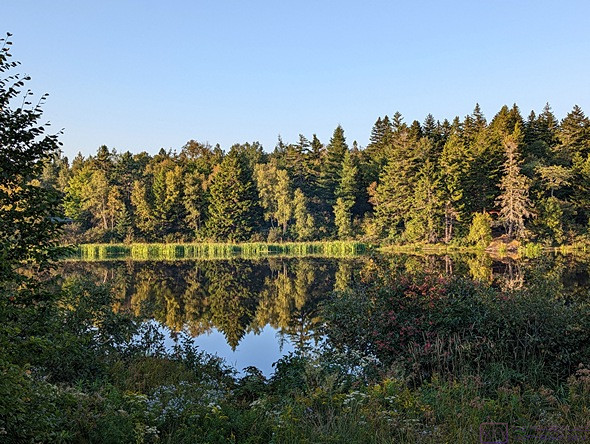 Another view of the north pond in a slightly different direction.

We had grapes and pretzels for a snack around 1:30 PM and then went for a walk around the campground.  The bath house was locked, which we thought was odd, so we walked all the way to the office to inquire about this.  It turned out that they had taken advantage of the park being empty to give them a very thorough cleaning and planned to reopen them at 2 PM.  While we were there, an Airstream travel trailer pulled in.  It was a solo female traveler from Texas.  Throughout our trip, and especially after moving from Ontario into Quebec, we had not seen very many U.S. license plates, except when we crossed paths with Fantasy RV Tours and Adventure Caravans. 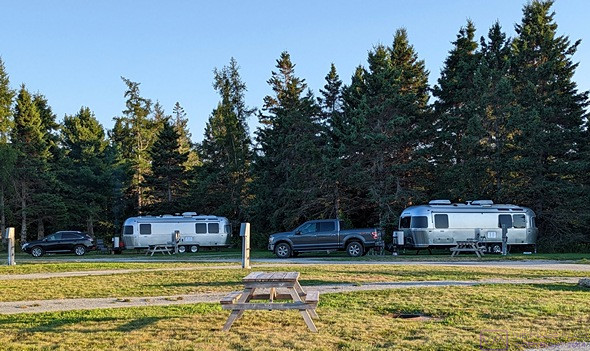 Throughout the afternoon, more RVs arrived, including this Airstream International that parked two sites down from us.  The International is a different/higher model line, but it appeared to be a front-bed floor plan of approximately the same length as our trailer.  The were towing it with a Hyundai SUV.

We are moving the trailer tomorrow to a Boondockers Welcome host site near St. John, New Brunswick.  I had already confirmed via the BW messaging system that we would be there, but wanted to touch base with the host, Rob, by phone in advance of our arrival.  We chatted briefly, verified that we had the correct directions, and confirmed an arrival time of “noonish.”  We have hosted quite a few BW guests at our home, but this will only be the second time we have stayed somewhere as a guest. 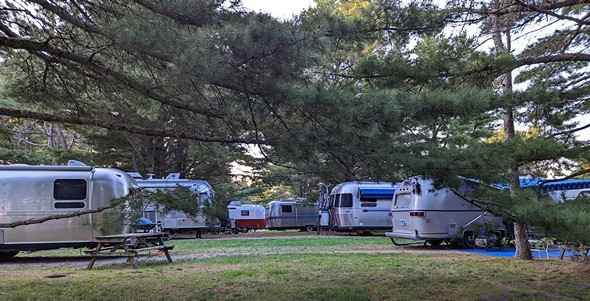 “Holy cow, Batman, that’s a lot of Airstreams.”  As we walked through a sea of Airstreams, we saw the woman who had checked in at 2 PM and chatted with her.  We had stumbled upon an Airstream caravan touring the Maritime Provinces.  She said there were 21 RVs in the group, including one motorhome. The motorhome was quite rare as it was one of the conventional fiberglass body models that Airstream only made for a couple of years. 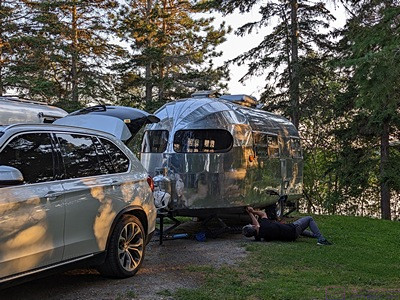 True vintage, sort of.  Wally Byam himself (founder of Airstream) is said to have actually helped build this 1946 Curtiss-Wright Airstream travel trailer.  The current owners restored the exterior, but installed a modern interior, so it was not a collector’s item, but beautiful, just the same.

I had started processing photos last night from our visit to Fundy National Park yesterday, but was too tired to do them justice.  I had also started working on the text for the blog post, but ended up sort of outlining the highlights of our visit.  I work better when I’m not tired, and was much productive this afternoon than I was last night.  The same was true for Linda, who worked on receipts and banking for a while.  Her special task was the compiling a list of everything we have purchased in Canada that we are bringing back to the U.S.A. on Sunday and printing it out so we can hand it to the CBP officer, if needed.  My goal was to get the post for yesterday finished before dinner and at least make good progress on the one for today.  I almost made it, but had to put my computer aside while we had dinner.

Linda had hoped to grill our impossible burgers for dinner this evening but, once again, the mosquitoes dictated that we cook and eat indoors.  To go along with the cheeseburgers, we had corn-on-the-cob, and finished the cole slaw from yesterday.  Fresh strawberries provided a nice finish to the meal.

We went for a walk after dinner, and as we approached the bath house we saw another Airstream travel trailer.  “How unusual,” we remarked “to have four Airstream units in a somewhat out-of-the-way-and-mostly-empty RV park.”  And then we saw another one, and another one, and it finally became clear that a group of Airstreams had occupied the entire section of the campground on the south side of the bath house.  That didn’t happen by chance, so we routed our walk through that section and eventually met the woman we had seen checking in when we walked to the office in the early afternoon.  She verified that this was an organized caravan of members of the Airstream Club International (ACI) (which we also belong too), also known as the Wally Byam Caravan Club International (WBCCI).  It did not, however, appear to be an official ACI caravan.

A panoramic view looking east at part of the Airstream Maritimes Caravan.

After our walk, we settled in for the evening and closed up the trailer as the evening chill had set in.  We both had a glass of Black Tower Rivaner white wine, which finished off that bottle.  I finished proofreading and correcting the blog post for yesterday and was finally able to upload, assemble and publish it.  Linda was reading it on her iPad later and found an error, so I logged back in and fixed it right away.

Because tomorrow will be a travel day, I put the finishing touches on this blog post and uploaded, assembled, and published it at 11:15 PM local time before I went to bed.