(There are 11 photos in this post, distributed throughout the text.)

I woke up around 3 AM to the sound of light rain but went back to sleep.  We were both up by 7 AM and had one cup of coffee each.  Breakfast was fresh blueberries (jumbo size) and a slice of Rob’s Cranberry Walnut Bread, lightly toasted and buttered. 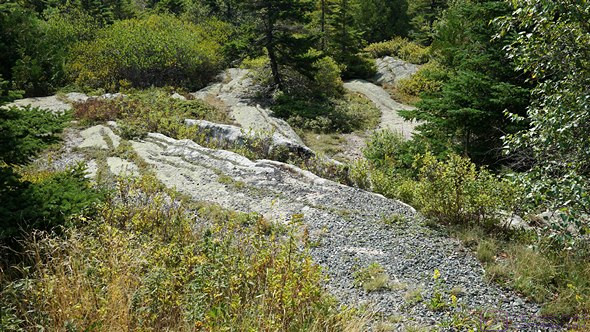 This is how much of the top of Cadillac Mountain in Acadia National Park looks.  Because of the micro-climate (altitude, winds, moisture, sunlight, temperatures, etc.) there are some flora found here that are only found much farther north into New Brunswick, Canada.

Our main activity for the day was a visit to Acadia National Park.  The Hulls Cove Visitor Center is on Hwy-3 (Bar Harbor Road) on the NE coast of Mount Dessert Island (MDI).  Hadley’s Point Campground is also on Hwy-3, at the northern tip of MDI.  We left at 9:45 AM and it took ~5 minutes to get the Visitor Center.  The parking lot was very full, but there were spaces at the far end (of course), where we prefer to park anyway.  The Visitor Center was mobbed, and there was no way we were going to get to the front of the line and still make our timed entry onto Cadillac Mountain Road.  Linda got one of the park staff to give her a map, but he didn’t seem very happy about doing it. 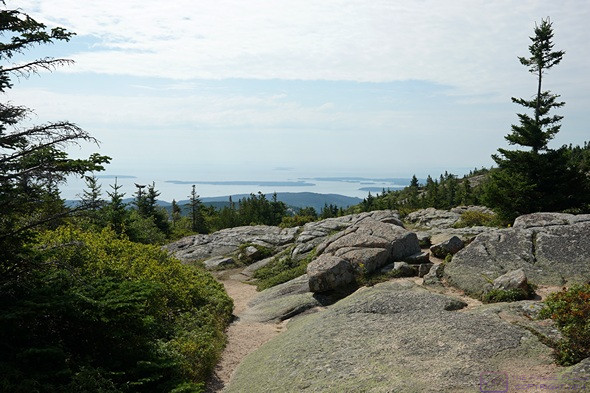 The view to the south from the summit of Cadillac Mountain in Acadia National Park, Maine.

We headed into the park on Paradise Hill Road, which became the Park Loop Road a little way before we arrived at the Cadillac Mountain Road Entrance Station at 10:30.  (Our timed entry reservation was for the 10:30–11:00 AM window.)  We were cleared through at 10:40 AM, and picked up a plastic park pass “hanger” in the bargain.  (The hanger holds one of our Senior Pass cards and hangs from the rearview mirror so it can be seen through the windshield.) 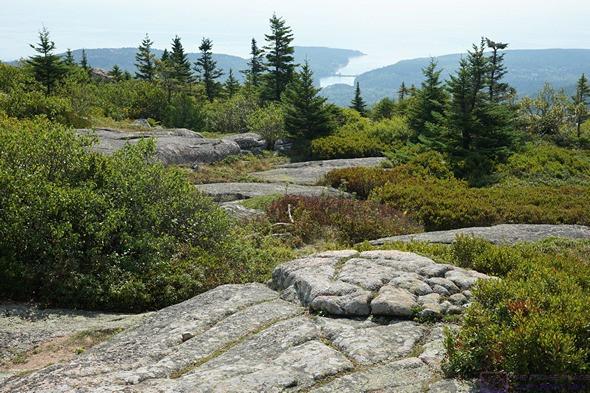 The view to the SSE towards Otter Cove as seen from the summit of Cadillac Mountain in Acadia National Park, Maine.

Cadillac Mountain Road was very cool to drive.  It had some nice scenic pullouts, but we passed those by on our way to the top.  The parking at the summit was already crowded, since once you are there you don’t have to leave until you want to. We pulled in to a spot in a small parking area just before the main lot, and walked the short extra distance to the summit.

This is a composite image of six photos take from the summit of Cadillac Mountain in Acadia National Park, Maine.  The left edge is north and the right edge is southeast, more or less.  The compositing was done with Microsoft Image Composite Editor (ICE).  The photo is 1198×234 pixels, but displayed at 599×117.  Click to view full size on a compatible device.

It was a very sunny but hazy day, not ideal for pictures, and quite warm on the summit, with no shade.  We walked the Summit Loop Trail, an easy and well-defined 1/2-mile loop around part of the top of the mountain.  BTW: Cadillac Mountain is the highest mountain on the eastern U.S. seacoast at 1,527 feet AMSL.  On the way back down, we pulled into a couple of the scenic pullouts (or Lookoffs, as the are called in eastern Canada), but did not get out.

The confirmation /ticket for our timed entry reservation to drive up Cadillac Mountain in Acadia National Park, Maine.  Linda booked this online, and the confirmation/ticket came as an e-mail.  We could have printed it (we have a small printer with us), but easier to just open the document on my computer and take a picture of it with my phone.  The park staff at the entrance station had handheld scanners for readying he QR code on a phone, and that was what most visitors did.

Once back down to the Park Loop Road, we headed back towards the Visitor Center and stayed to the right for the one-way Park Loop Road.  (Most of the Park Loop Road is one-way, going clockwise from its northern starting point at Paradise Hill Road, except for the stretch from there south along the western edge of the park the Wildwood Stables.)   The road was two-lane, and parking was usually permitted in the right lane near major attractions, but prohibited elsewhere.  And the street parking was absolutely needed, as the park was mobbed.  Fortuneatly for us, we were only doing a scenic drive-through today. 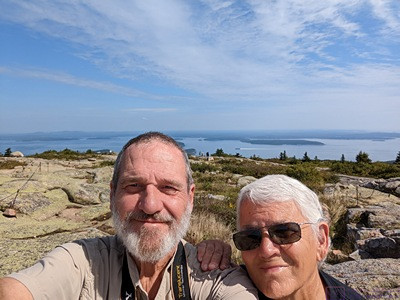 The requisite “we were here” selfie from the top of Cadillac Mountain, Acadia National Park, Maine.  We are looking south.

We had only visited Acadia NP once before, almost 20 years ago, and did not recall it being this crowded.  (A local supervisor for the Island Explorer bus system told us later that it has only become overwhelmingly crowded since about 2017.)  Our recollection was that we just drove up Cadillac Mountain when we wanted to, and had no difficulty finding places to park at the attractions, such as Sand Beach and Thunder Hole.  (The operation of the National Parks is a delicate balance between protection/preservation and access/recreation, and the massive number of people now seeking to visit the larger and more famous parks has become a real challenge for park managers.  It looked to us like Acadia NP was doing a good job, but I wouldn’t be surprised if they ultimately have to institute a reservation system just for park entry.) 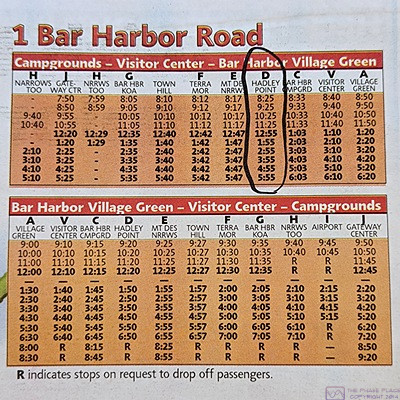 We were going to stop at the Hulls Cove Visitors Center on the way out of the park, but the parking lot was still packed.  Part of the reason it was full is that visitors doing serious bicycling through the Park, park here and start their rides from here.

Back at camp we had Fritos and roasted red-pepper hummus for lunch, and each had 1/2 of a pear.

One of the things we learned about upon arrival yesterday was the Island Explorer transit bus system.  The service began in 2002, and has received massive support from L. L. Bean since the beginning.  It is free to use, and has 12 bus routes linking Bar Harbor with hotels, inns, and campgrounds, destinations in Acadia NP (including campgrounds) and neighboring village centers.  The buses currently in use run on propane, which burns much cleaner that petroleum fuels. 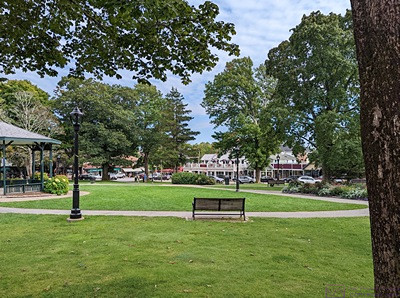 This green space is near the center point of Main Street in Bar Harbor, Maine and offered a nice place to sit on a park bench in the shade.  It also served as the main terminal for the Island Explorer bus system.  Given how crowded Main Street was, the Village Green was only lightly used.

Our campground was one of the scheduled stops, so we caught the 2:55 PM pick-up and rode the bus to the Village Green in Bar Harbor.  I like to ride on buses.  I don’t mind driving (we’ve put over 7,300 miles on the truck this trip), but I don’t like parking in cities, especially tourist towns like Bar Harbor.  The Village Green was a grass square with trees and crisscrossing paths.  One whole side, and part of a second side, served as the central “terminal” for the bus system (routes 1, 2, 3, 6, 7, & 10).  The other main “hub” was the Hulls Cove Visitor Center (routes 1, 4, & 5) and the Southwest Harbor / Tremont area, which had a dedicated bus (route #11).  (Take the #7 Southwest Harbor bus to get there.)  (Route #8 is the Schoodic Woods area of the park.  I was unable to find any information about route #12.) 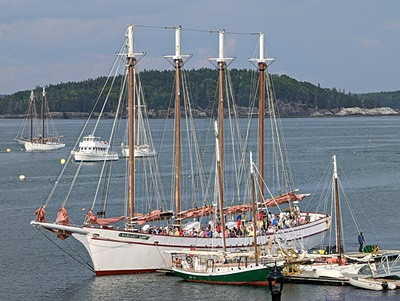 The S/V Margaret Todd coming into Bar Harbor with the sails down.  She’s a 4-masted schooner that is 151 ft long (overall) with a 23 ft beam, and displacement of 150 tons.  She drafts 5’9” with the centerboards up, and 12 ft with them down.  She flies seven sails—a main on each of the masts and three foresails (jibs and genoas)—with a sail area of 4,800 sq. ft.

We arrived at the Village Green around 3:20 PM, and walked the main commercial street for about 90 minutes.  It’s a quaint place, in a touristy sort of way, and we enjoyed strolling through town and down to the harbor.  As it was Monday, some of the shops and eateries were closed, but most were open and had customers.  Indeed, there were a lot of people in downtown Bar Harbor this afternoon.  Some of them were almost certainly passengers from the two cruise ships anchored out in Frenchman Bay.  The larger one was the Celebrity Summit (1950 passengers) and the smaller one was the Regent Seven Seas Navigator (490 passengers).  But even without cruise ships, there are a LOT of hotels, inns, cottages, B&Bs, and campgrounds in and around Bar Harbor, and the rest of Mount Dessert Island, and Bar Harbor is the place that many visitors, like us, gravitate to at some point. 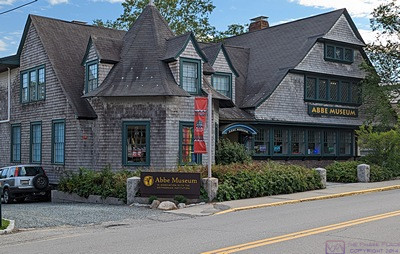 The Abbe Museum in Bar Harbor, Maine.  There were many old buildings in town, but I took this photo because I thought the building was interesting and there weren’t cars and people in front of it.  (There was a very modern addition on the back, not shown in this photo.)  We did not have time to go in, but I looked it up later.  From the museum’s website:
“In recent years, the Abbe has grown from a small trailside museum, privately operated within Acadia National Park, to an exciting contemporary museum in the heart of downtown Bar Harbor. In 2013, the Museum became the first and only Smithsonian Affiliate in the state of Maine.
At the Abbe’s downtown museum, visitors find dynamic and stimulating exhibitions and activities interspersed with spaces for quiet reflection. The history and cultures of the Native people in Maine, the Wabanaki, are showcased through changing exhibitions, special events, teacher workshops, archaeology field schools, and workshops for children and adults. From spring through fall, the Abbe’s historic trailside museum at Sieur de Monts Spring continues to offer visitors a step back in time to early 20th century presentations of Native American archaeology in Maine.”

While walking, I spotted a pillow in the display window of My Darling Maine with embroidered Puffins on it.  Linda really liked it, so she bought it.  They put it in a protective plastic bag and set it aside for us to pick up later on our way back to the bus.  At the Espresso shop across the street from the pillow place, Linda got an iced coffee.  I wanted something like a Frappuccino, but none of the coffee shops in town had anything like that. 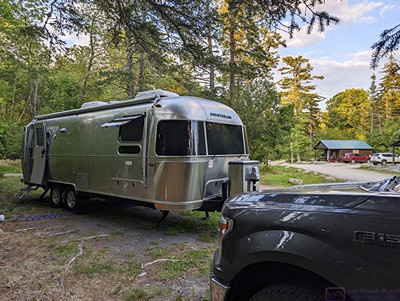 Our trailer in site 21/22 at Hadley’s Point Campground.  This view conceals the uneven and unlevel reality of the site.  It also gives the appearance that fall might be under way, but that is a trick of the light.  We did see the beginning of color in the trees and bushes around Mount Dessert Island, but the color palette here was still overwhelmingly green.

When we had walked all we cared to, we found a shaded bench in the Village Green and watched the world go buy while we waited for the 5:30 PM pick-up of the #1 Bar Harbor Road bus.  We had the same seats going back, with the same couple seated just in front of us.  Small world.

We were back at our trailer by 6 PM and Linda started working on dinner right away.  We started with a nice green salad with peanuts, vegan blue cheese, and raspberry vinegarette dressing.  The main course was  organic Lumaca Rigata pasta (from Napoli, Italy) with arrabbiata sauce and mushrooms sauteed with dried shallot flakes (we forgot buy onions yesterday).  The arrabbiata sauce had a bit of kick, which we both liked.

The rest of the evening was the usual reading, games, puzzles, photo processing, and writing.