We had woken up to fog hanging above us in the campground.  After checking the weather forecast, we decided that today was not the day to use the Island Explorer bus service to re-visit Acadia National Park (ANP).  We looked at our map of MDI/ANP and decided to drive to Southwest Harbor and up the western side of MDI and on to Ellsworth.  I worked on the blog post for yesterday but did not get finished before we left to go explore more of Mount Desert Island (MDI). 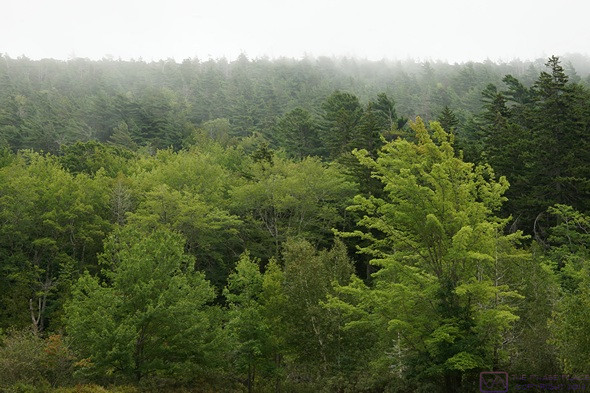 The tree-covered hill on the east side of Echo Lake at Echo Lake Beach.  Our impression of Mount Desert Island generally, and Acadia National Park in particular, at this time of year was a palette consisting of shades of green, with occasional hints that fall is just around the corner.

We left around 10 AM and drove back into Bar Harbor on Hwy-3 where we picked up Hwy-233 over to Hwy-3/Hwy-198 and on to Hwy-102, bearing left to Somesville.  We did a slow roll through town, because there was a lot a traffic and pedestrians.  It looked like a cool place to stop, with galleries and shops, including food and coffee, but parking looked to be a problem. 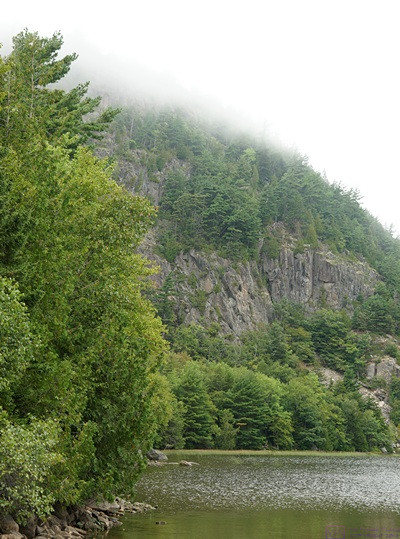 The west side of Echo Lake as seen from Echo Lake Beach, with the hilltops still shrouded in mist.

We continued traveling south, parallel to the west edge of Somes Sound, and stopped at Echo Lake Beach where I took a few photos.  There were two people swimming in the Lake wearing wetsuits.  A sign warned that the water was “wicked cold.”

We continued on to Southwest Harbor, which impressed us a working harbor in a working town; definitely not upscale MDI.  The harbor, however, really caught my eye as it was shrouded in mist.  I turned in to a small roadside pull-off and spent a few minutes looking at the scene.

We then took Hwy-102A to the left through Manset, and on towards Bass Harbor.  We turned south onto Lighthouse Road, which led down to the Bass Harbor Head Lightstation; a 19th-century cliffside lighthouse that is still in operation as an aid-to-navigation at the southernmost point of MDI.  We had encountered very little traffic up this point in our drive (except in Bar Harbor) but the way-too-small parking lot was full with a few vehicles waiting to get in, and no easy way to turn around.  When we were finally first in line, I managed to turn around and we left.  It was practically fogged in, so we weren’t really going see much anyway, and the building is not open to the public.

Southwest Harbor, Mount Desert Island, Maine, shrouded in a fine mist.  (My attempt at a ‘high key’ photo, which is not something I do very often.) 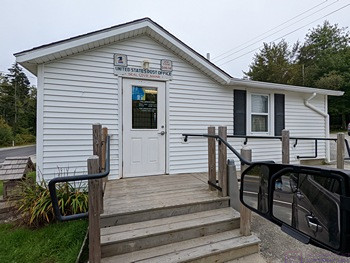 The U.S. Post Office in Seal Cove, Mount Desert Island, Maine.  We think the postmaster lived in the matching house off-camera to the right.

We continued on Hwy-102A into Bass Harbor, which ended at Hwy-102 at the north end of town, and continued west and north past Bernard.  We continued north as far as Seal Cove, where we stopped at the US Post Office so Linda could mail two postcards.  The post office was a small white clapboard building that shared a parking lot with a somewhat larger adjacent white clapboard house.  We presumed that postmaster lived in the house.  We continued north and east on Hwy-102, eventually going back through Somesville.

The drive up to this point took us in and out of the western part of ANP.  It seemed less crowded than what we experienced yesterday, although the parking at major trailheads was full to overflowing.

We eventually rejoined Hwy-3 just before crossing the Mount Desert Narrows, and drove through Trenton enroute to Ellsworth.  Our destination was John Edward’s Market on Main Street in downtown Ellsworth, Maine.  Main street was quaint and busy; very different from the impression we got just driving through the new part of town on ME-3.  Street parking was in full use but there were large free public parking lots just behind the stores on either side of the street.  Finally, free public parking!  We walked through the space between two buildings, looked to our left, and there was the store!  (IMO, there should be a nationwide designation for “tourist/visitor friendly city” and one of the requirements to get this designation should be a LOT of FREE parking.  Other requirements should include pedestrian friendly, etc.) 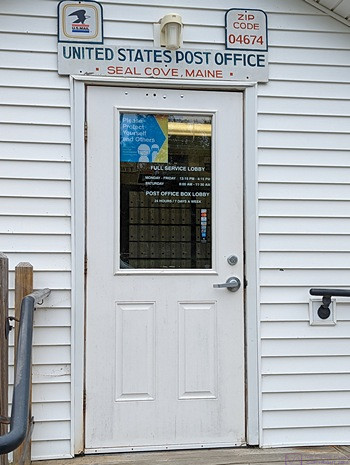 The lobby door to the Seal Cove Post Office.  The ZIP Code is just above the right edge of the door.

The John Edward’s Market specializes in organic food, has an amazing spice department, and a small but very good wine selection, including vegan wines.  (Mostly wines are not vegan because of the way they are filtered.)  Our only disappointment is that they only had grape wines, and even then almost nothing from Maine wineries.  We were hoping to find a selection of good blueberry wines, which seem to be available in regular supermarkets.  We bought a few onions, some non-dairy cheese, some fresh and dried fruit, and a few other things, and opined how we wish we had a market like this close to our house.

It was approximately 13 miles back camp.  We through about stopping in Somesville to grab a bit to eat and something to drink, but somehow missed the very quaint downtown area.  (We studied maps later and still had no idea how that happened.)  We were hungry by this time, so we had the left-over pasta from last night for lunch.  The foggy, overcast weather had persisted all day, and we closed up the trailer against the slightly chilly, humid air, and the misty drizzle that eventually developed.  We each had two cups of decaf tea between lunch and dinner.

I worked on the blog post for yesterday and finally finished it.  I started assembling it in WordPress, and was about half-way to done, when Chuck-the-barn-builder, called.  We had a long chat and pinned down some important details about the barn.  We also agreed to deal with the added cost of the roll-up doors for the RV bays in a way that was acceptable to both of us.  We have had a great working relationship with Chuck, and have complete confidence in the barn being built while we are away, and I wanted to make sure we maintained that to the end of the project, and beyond.

We wrapped up our conversation and I finished assembling the post and published it before we sat down to eat.  Dinner was Amy’s “chicken” noodle soup (vegan) and crackers with vegan butter and peanut butter.  Dessert was pear wine and cookies.

The rest of the evening involved reading for Linda, and some photo processing and writing, for me.  Today was “patch Tuesday” for Microsoft products.  I had checked several times throughout the day to see if updates were available.  They were not, but I checked again and there they were!  There were four of them, and I went ahead and initiated the update process.  We had both been seeing a lot of app updates on our iPads as well.  That usually means an iPadOS update is imminent.  I also saw a news item about the recent annual Apple product event, which covered the new features in upcoming release.  I checked for the update, and there it was!  We are very glad to have our Verizon Jetpack Mi-Fi back in service (it doesn’t work in Canada) as it has an unlimited data plan and it’s generally pretty fast.  Even so, all of these updates took quite a while and kept me up latter than I intended.  I started working on a new multi-sudoku puzzle, but was too tired to concentrate, and finally went to bed.