As much as we would have liked to spend a bit more time in the area, especially to visit the city of Kingston, the Kingston KOA was just a planned overnight stop for us.  (We learned later, while visiting Ottawa, that Kingston was originally planned to be the National Capitol.)

So today was another relocation day.  Our next destination was only 75 miles away, again mostly driving on the 401.  Check-out time was 11 AM and check-in time was 1 PM.  A phone call determined that we could arrive early, so we arranged our morning to pull out just before 11 AM.  Paul and Nancy determined that they could delay their departure, and planned to leave around noon.

We arrived at the Cardinal/Ottawa South KOA around noon to a small traffic jam.  The sites here do not have a sewer hookup, so there is a dump station at the exit.  A number of rigs were lined up to dump and the campground was using their “honey wagon” to speed up the process.  Unfortunately, the honey wagon was parked in the entrance lane.  I pulled to the side to park while Linda checked us in, but then RVers who did not need to dump wanted to get out through the entrance.  I was able to pull in and get out they way, just allow traffic to flow.

We had a nice site (W3W=bristled.likes.taxman) near the front of the campground, far enough from the office and activity area to not be noisy but close enough to make the bathroom/shower facilities convenient.  We used our newly crafted setup list and the process went much more smoothly.  About the time we were done, Paul and Nancy pulled in and their site was right next to ours.  By mid-afternoon the park was essentially empty and the mostly of the rigs that were still here were unattended and appeared to be seasonal or annual.  Almost all of them were in good shape, however, as was the campground generally.  There seems to be a lot staff here, especially younger folks, and all of them were pleasant and helpful.  Here are two pictures of our sites/rigs. 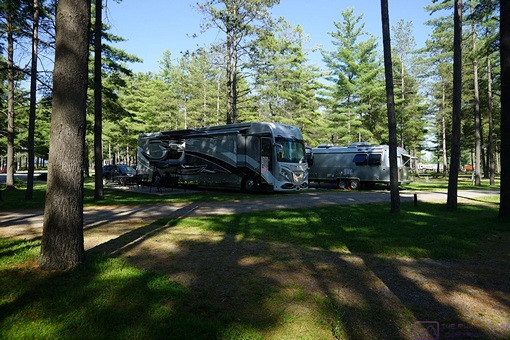 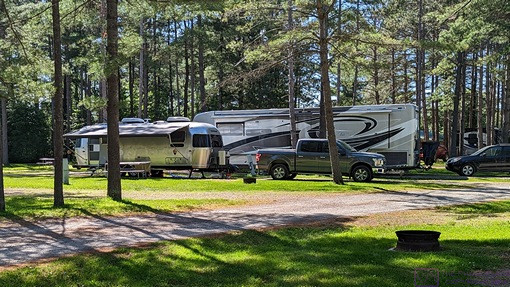 Today was a big day for the four us, with a planned visit to Ottawa.  We decided that, as first-time visitors, we would book a 10 AM hop-on/hop-off bus tour with Lady Dive Tours.  We had an hour’s drive, plus needed time to find parking, and left the campground at 8:30 AM.

The weather was absolutely perfect, so we sat on the upper/open deck of the bus.  It was a great choice.  We stayed onboard for the entire loop, which took about 2 hours.  The bus driver and tour guide were both fabulous, with the tour guide perfectly fluent in both English and French.  She used both languages to explain everything we were seeing, and we saw a lot.  We especially liked the contrast between the old/stately architecture and the very new/modern architecture, and how well they coexisted. 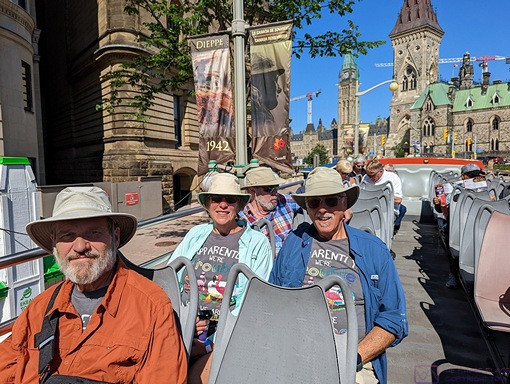 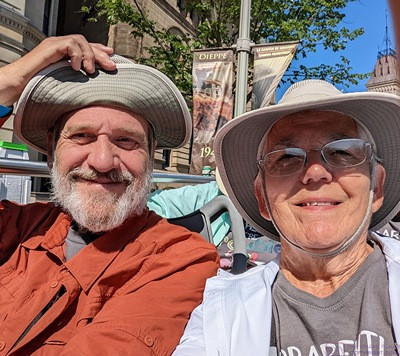 Just the two of us

Being a Monday, most of the museums along the route were closed, but we hadn’t planned to do museums on this visit anyway.  As nice as the hop-on/hop-off idea is, we decided not to take advantage of it on this visit.  Besides, it was lunch time.  Linda had found a vegan restaurant online that was not far from the bus stop and parking garage, and we set off on foot to find the Copper Branch.

The Copper Branch was a small place with a couple of tables, mostly doing carryout and delivery, but we were able to snag a table and enjoyed really good meals.  The portions were generous, and we ended up taking the left-overs home for dinner. 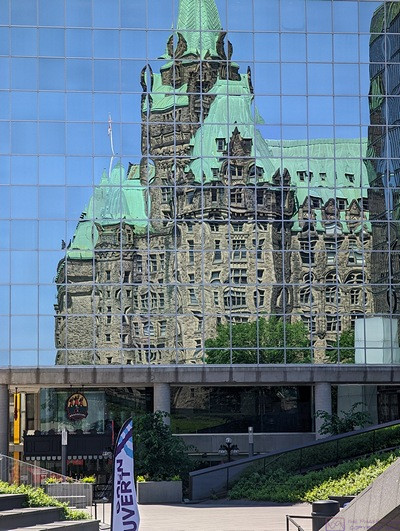 Ottawa architecture is a fascinating mix of old and new

Our main reason for visiting Ottawa was sight-seeing, but a secondary reason was to visit a Whole Foods Market to stock up on things we could not find at the Real Canadian Superstore in Milton.  The WFM was small compared to the RCS, but it had the organic and specialty items we wanted.  It was also next door to an LCBO (Liquor Control Board of Ontario) location, which was fortuitous as Paul wanted to buy a bottle of Single Malt Scotch and the WFM did not sell wine.  Suitably stocked, we headed back to camp to relax, have our left-overs for dinner, and enjoy a little wine around a campfire. 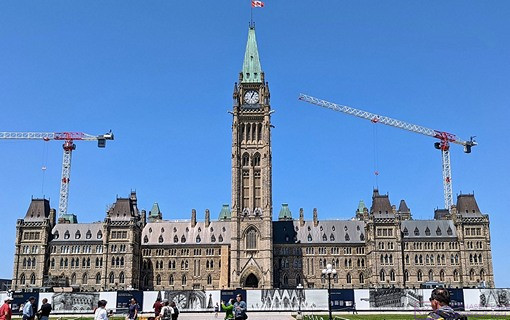 Today was the Summer Solstice, but the sun did smile upon us.  Into every camping expedition some rain will fall, and today was our day.  It was overcast all day, with rain off and on and heavy at times.  Not a problem.  While we are on an epic adventure (for us), we intend to pace ourselves and make time to relax, do research, and take care of housekeeping chores, like shopping and laundry.  Today was a great day for Bruce to start working this blog again, as was suggested to him at the recent GLAMAAMA rally by fellow GLCC/CCO busnut Vicky.  The plan going forward is do a blog post for each place we overnight, with a few pictures and not too much text.