(There are 11 photos in this post, all related to the Women’s Rights National Historic Park in Seneca Falls, New York.  They are distributed throughout the text, with captions.  I have used the mnemonic ‘WRNHP’ in place of the full name of the park.  All of the photos were taken with a Google Pixel 6 Pro smartphone.) 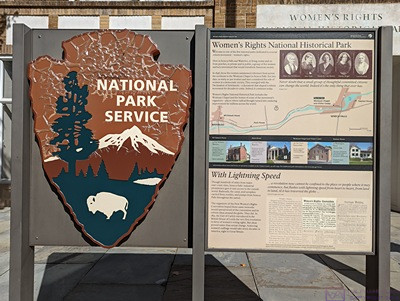 The National Park Service sign at the entrance to the WRNHP Visitors Center in downtown Seneca Falls, New York.

Our plan for today was to visit The Women’s Rights National Historical Park (WRNHP) in Seneca Falls, New York, and then visit a few wineries on the west side of Seneca Lake.  The morning was cool and cloudy, and Seneca Falls is near the north end of Cayuga Lake just a bit east of the north end of  Seneca Lake, so we figured we would start there and do the wineries in the afternoon, when the sun was supposed to make an appearance.  We ended up spending most of the day at the WRNHP.  The only winery we made it to was Belhurst Castle & Winery on the west side of Seneca Lake, just south of Geneva, New York., but we did not taste or by anything. 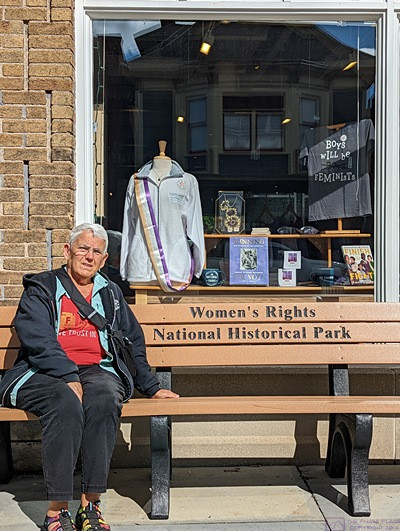 Linda on one of the benches outside the WRNHP Visitor Center.

We left around 11 AM and had a leisurely drive through the countryside, taking Canandaigaua Farmington Line Road east to County-28 north to Shortsville Road / County-13 and heading east.  We passed through Shortsville and Clifton Springs and then joined NY-96 east.  Just after joining NY-96, we stopped at the Byrne Dairy & Deli to fuel the truck, and then continued on through Phelps before getting to Waterloo, where we turned east on US-20 towards Seneca Falls.

All of these towns have a history, of course, and New York has a lot of these towns.  Clifton Springs, for instance, was once one of the many ‘health retreats’ that dotted the state.  Passing through downtown was like driving through a canyon whose walls were made of impressive hotels, now mostly re-purposed, but still very much in use and in decent condition. 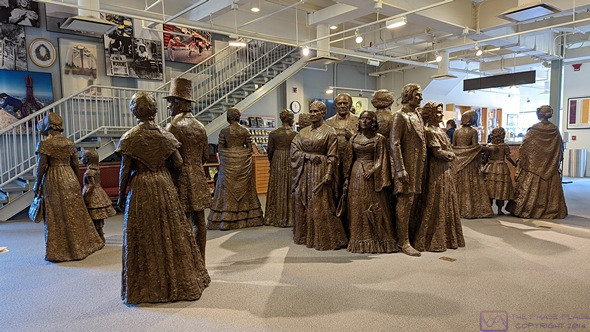 The first (street level) floor of the WRNHP consisted of an information station, gift shop, theater and this installation of (approximately) life-sized bronze statues called The First Wave.  Some of the figures are likenesses of the key people who organized and/or were known to have attended the first Women’s Rights convention.  Other figures represent the general public, many of whom also attended the convention or were, symbolically and literally, ultimately affected by what started at this gathering. 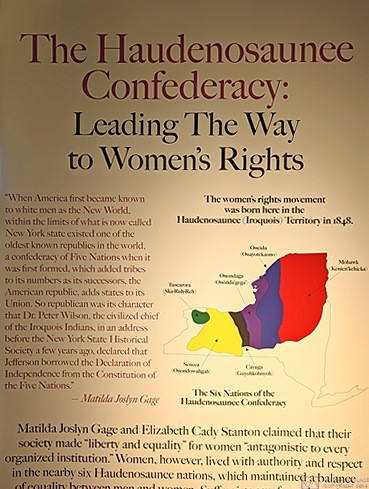 In the 1840’s, the six nations of the Haudenosaunee (Iroquois) Confederacy spanned across northern and western New York, including Seneca Falls.  Theirs’ was a matriarchal society in which women enjoyed all of the rights that were denied to American women at the time.  It is not recorded whether any members of the Haudenosaunee Confederacy attended the 1st Women’s Rights Convention in Seneca Falls, but the organizers of the convention were acquainted with their culture and echoed those rights in their own resolutions (demands).

The WRNHP (National Park Service) consisted of four distinct properties in the Seneca Falls / Waterloo area.  The main site consisted of the Wesleyan Methodist Church and Chapel, with the Visitor Center building in-between, located on Fall St. (US-20) at Mynderse St., in the heart of the quaint downtown district along the north side of the Seneca River (Cayuga-Seneca Canal).  (The falls for which Seneca Falls disappeared underwater as a result of the canal construction from 1905 to 1918).  We found free street parking close to the Visitor Center.  The other three sites were the Elizabeth Cady (& Henry) Stanton Home, on the other side of the canal, and the Thomas (& Mary Ann) M’Clintock House and Richard (& Jane) Hunt House, both in Waterloo. 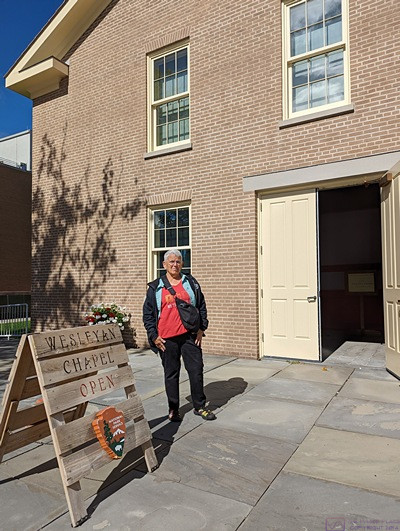 Linda at the entrance to the Wesleyan Chapel.  The WRNHP Visitor Center sits between the Church and the Chapel, which sits at the southwest corner of Fall St. and Mynderse St.  Only a portion of the two side walls and much of the roof structure is original and the Church is boarded up as it needs serious restoration.  The first Women’s Rights convention actually stated outside the Chapel at that street corner as the Chapel door was locked and no one had a key.  A young boy was enlisted to climb in through a window and unlock the doors from the inside.

The WRNHP was authorized in 1980 to preserve the key historical sites associated with one of the most significant events in American History, the beginning of the organized movement for women’s suffrage, which ultimately became the movement for universal suffrage.  The first Women’s Rights Convention was held in the Wesleyan Chapel on July 19-20, 1848, with some 300 people in attendance over the two days.  Notable attendees included Lucretia Mott and Frederick Douglas. 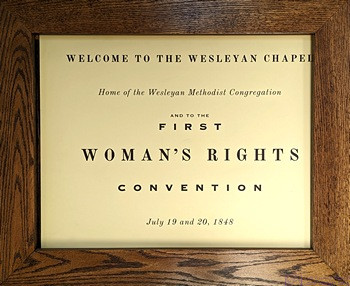 This sign greets visitors as they enter the Wesleyan Chapel.

But the story begins well before that, of course, and is the reason that the Hunt and M’Clintock properties are part of the NHP.  On July 9, 1848 Jane Hunt hosted a social gathering at her home in Waterloo, just down the road from Seneca Falls,  in honor of a visit from Lucretia Mott, who had traveled to the area from Philadelphia to visit her sister in Rochester, New Yok.  In 1833 Mott, along with Mary Ann M’Clintock and nearly 30 other female abolitionists, organized the Philadelphia Female Anti-Slavery Society.  By 1848, Mott was a nationally known figure, but she and Elizabeth Cady Stanton had already crossed paths at the 1840 World Anti-Slavery Convention in London, England; a significant event for both of them.  Thus, the abolitionist and suffrage threads that run though American history were intertwined early on, and the Visitor Center tells the story of the struggle for women’s rights in this larger context of the struggle for human rights for all people. 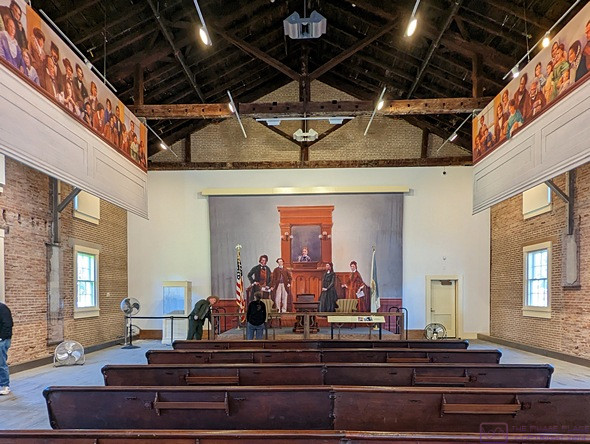 The inside of the Wesleyan Chapel.  The balconies along the sides were removed long, long ago, but the pockets for the supporting timbers were still visible in the original sections of the side walls.  In place of the balconies, the NPS hung murals depicting convention attendees.  The mural across the back wall depicts five of the key figures in the organization and operation of the convention.  The pews would have been more closely spaced and wider.  (The cost to fully restore the building to the way it existed in 1848 would be prohibitive.) 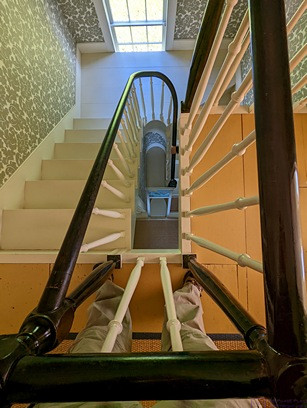 The central staircase in the house where Elizabeth Cady Stanton resided with her family and carried on much of the work that followed the first Women’s Rights Convention.  The house was modified over the years after the Stanton family lived there.  It has not been restored or “furnished” for display, and there are no plans to do so, so the interior was not particularly interesting, photographically.  But how it looked was not important; what happened here was.

Over the course of two days, over 300 people attended and participated in the convention, so this building was packed with people.  The Declaration of Sentiments, patterned after the Declaration of Independence, was read, amended, and adopted.  Eleven resolutions were then introduced, discussed, and voted on.  All of them were adopted, with only one having less than 100% support.

Besides the Wesleyan Chapel (and Church), the NHP includes three residential properties.  The Elizabeth Cady Stanton House is also in Seneca Falls, while the homes of  Mary Ann M’Clintock and Jane Hunt are in nearby Waterloo.  (Neither of these houses were open to the public during our visit.)  It was through M’Clintock that Lucretia Mott came to be involved in the convention.  At a social gathering (tea) at the Hunt home on July 9, 1848 that the idea of a convention was discussed and the decision made to organize it.  The dates, July 19 and 20, 1848 were selected because the Wesleyan Chapel was available, and so was Lucretia Mott. 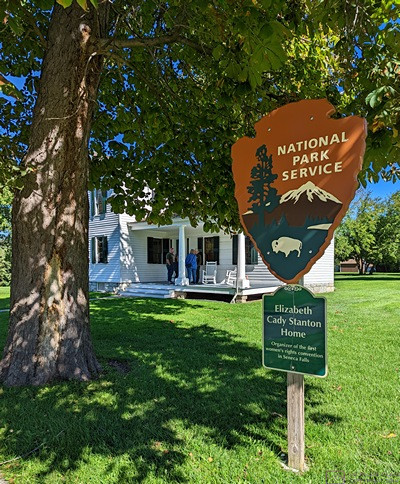 A view of the exterior of the Elizbeth Cady Stanton house with the NPS sign indicating is part of a National Historical Park.  The house sits on four acres on the other side of the canal from downtown Seneca Falls.

The whole story of the fight for women’s suffrage in the U.S. has been documented and written about extensively, and the WRNHP Visitor Center gift shop had an excellent selection of books on the subject.  I will simply end with these facts, followed by a few more photographs:  The 19th Amendment to the U.S. Constitution was passed by Congress on June 5, 1919 and finally ratified by enough States on August 18, 1920.  Michigan was the second State to ratify the amendment. 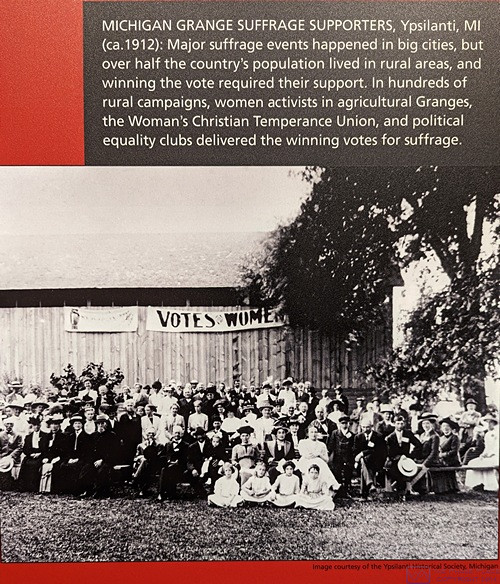 Most of the artifacts and information displays were located on the 2nd floor of the WRNHP Visitor Center.  It was all very well done, as expected, but light levels were low and there was no way to get an overview photo.  Instead, I selected this on, showing a connection to Ypsilanti, Michigan to the events that subsequently unfolded as a result of the convention, and the decades of hard work that followed. 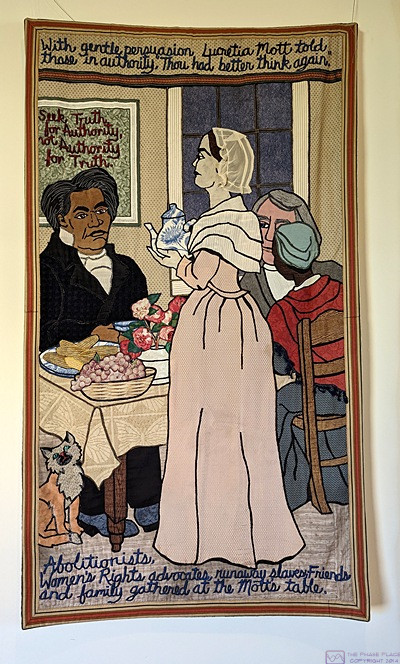 Some of the artifacts in the WRNHP Visitor Center were works of art and craft related to theme of the NHP, which goes beyond the convention and the struggle to secure the vote for women.  That struggle was ultimately about universal suffrage, and was wrapped up in the abolition of slavery.