(All photos taken with a Google Pixel 6 Pro smartphone.)

I was in bed before midnight last night, unusual for me, so I was up this morning just after 7 AM.  Linda did not go to bed until 11 PM and got up around 7:30.  We had our usual two cups of coffee, but Linda made pancakes for breakfast, with a side of fresh bananas, blueberries, and strawberries.  A special treat, and a nice way to start the day.

The weather forecast for today was for cool, overcast conditions, with small possibility of rain, but was much nicer for the following three days.  We thought we would visit some of the wineries on Canandaigua Lake as we are camped just north of it, so we spent some time researching the six establishments on the Canandaigua Lake Wine Trail. 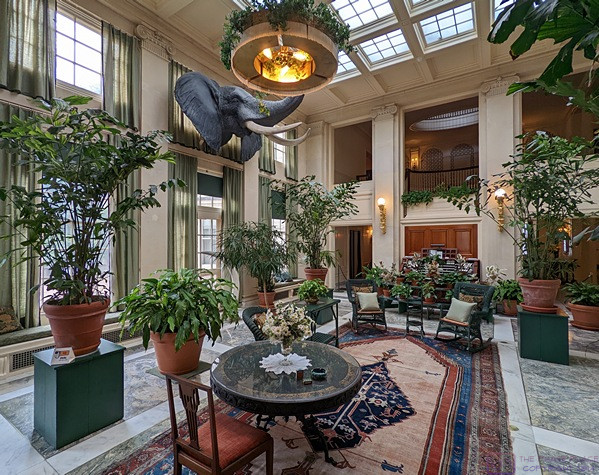 The conservatory as seen from the dining room.  The console for the pipe organ is at the far end and some of the pipes are installed in the 1st and 2nd floor walls beyond that.  Most of the house was dimly lit, but the conservatory was full of light even on this overcast day.  Like many wealthy individuals of the late 19th and early 20th centuries, George Eastman liked to hunt and had two hunting lodges.  George Eastman House / Museum, Rochester, New York.

One of them was not open today, one was basically a wine store in Canandaigua, one had what appeared to be fruit juice infused wines that could be used to make spritzers, and one was a “boutique” winery that required reservations, and all of them appeared to be tasting rooms, not the actual wineries.  So that was:  no go, no, no way, and not interested.  Most of them indicated what grapes were used to make each wine but some didn’t, an absolute non-starter for us, and most of them were based on grapes that fairly commonly used in the products we can buy at good wine stores at home.

It didn’t seem worth the time and fuel to drive down just for the other two wineries, so we scraped the wine trail idea for today and decided instead to visit the Eastman Museum in Rochester, New York, just a 30-minute drive northwest of our campground.  I took up photography as a serious hobby when I was 16, so I’ve been trying to be a photographer for some 54 years now and the Eastman Museum seemed like a good place to spend an otherwise dreary day.  We left the KOA around 11:30 AM and were at the museum by noon. 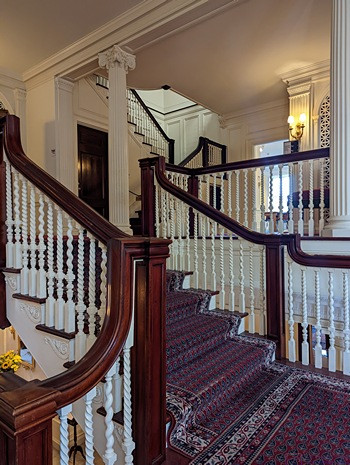 Part of the stair case between the 1st and 2nd floors of the George Eastman House.  This is the view from the landing.  The stairs to the 3rd floor are visible, but were closed to public access.

The Eastman Museum is located on the grounds of George Eastman’s Rochester, New York 10-acre estate on East Avenue.  East Avenue was obviously the place where the wealthy of late 19th-century Rochester built their magnificent homes and mansions.  A trip to that area just to look at the architecture would have been worth the time, but we were they to visit the museum.

The museum complex included his magnificent home and gardens which are open to tour with paid admission.  Indeed, the museum (galleries, archives, offices, and labs), theater, gift shop, café, and lobby are joined to the house to form a single building.  The collection, small pieces of which are periodically rotated into the publicly accessible galleries, contains over 400,000 photographs and 28,000 motion pictures, including the original negatives for Gone with the Wind and The Wizard of Oz.  The museum also has an extensive collection of photographic technology going back to the earliest days of photography in the 19th century.  It’s an excellent museum, and we spent about 2-1/2 hours going through the house and all of the galleries. 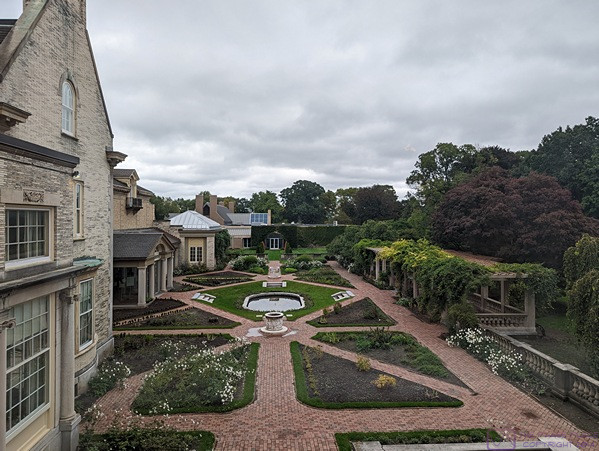 When we arrived at the Canandaigua-Rochester KOA yesterday, Linda research vegan dining options and discovered that Veg News had rated Rochester, New York “the best small city in America for vegans.”  That did not automatically translate into lots of vegan dining options, but she did locate the Red Fern, just 0.4 miles from the museum, so we went there for lunch. 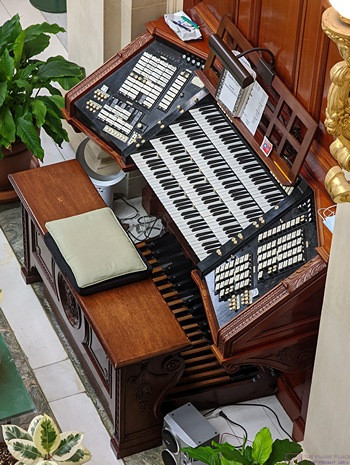 The ‘modern’ 4-manual organ console.  This console replaced the original 30-manual console after the organ was enlarged.  It was, and probably still is, the largest pipe organ installed in a residence in the U.S.  George Eastman House / Museum, Rochester, New York.

From the Red Fern we set our navigation system for the Wegman’s supermarket in Canandaigua.  It took about 45 minutes to get there, including long slow rolls through the town of Victor and then Canandaigua itself.

This was our first ever visit to a Wegman’s and all I can say is “Wow!”  The store was very large and the variety of items they stocked, including some we had never seen before, was almost overwhelming.  Their whole-foo, plant-based (vegan) offerings were as good or better than we had ever seen anywhere else.  They also had a restaurant (drinks and live music on the weekends), a sub sandwich shop, and extensive deli section that included a “burger bar”, an “Asian bar”, and a “Sushi bar.”  You could even order Food to Go and drop by to pick up your prepared meal.  We didn’t actually need anything, but we found a vegan parmesan cheese, and picked up a container of Just Egg, some vegan butter, and a pack of paper bowls.  We will probably go back on Saturday and restock the refrigerator and panty before heading to Hershey, Pennsylvania on Sunday. 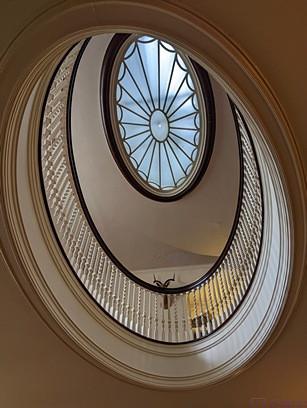 This opening is in the ceiling of the 2nd floor just above where the staircase from the first floor reaches the 2nd floor.  George Eastman House at the Eastman Museum, Rochester, New York.

What we did not find was the specific Dr. Elsey’s cat liter than Linda likes.  There was a Petco across the street, so we went there and, voila!, there was the specific liter that we had not seen since leaving home in mid-June.  Our shopping done, we returned to camp.

Back at camp there was another airstream travel trailer in our row, in addition to the one three rows back.  Another one came later, making four in our section of the RV park, including ours.  There was another one in the far west section when we arrived yesterday.  We didn’t notice if it was still here, so there might be five of them here.  That would be a surprisingly high percentage of the total occupancy at the moment.

For dinner, I finished my sandwich from lunch while Linda had a cheese sandwich and finished her brownie from lunch.  After dinner, she read while I worked on the blog posts and photos for yesterday and today.  At 8:30 PM, we streamed the next episode of The Great British Baking Show.  Linda headed off to bed at here usual 10 o’clock hour.  I stayed up long enough to finish and publish the blog posts for yesterday and today and made it to bed just after midnight. 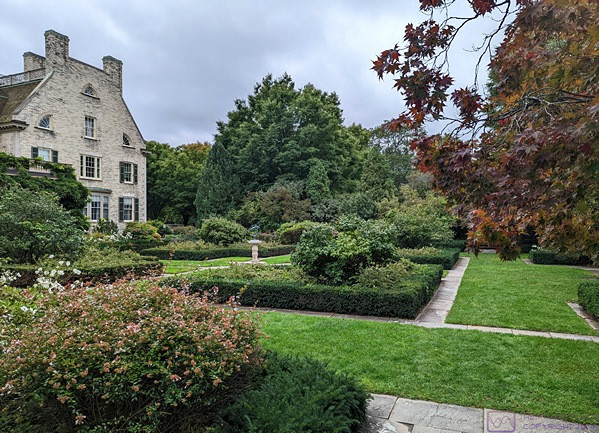 The West Garden at the George Eastman House as seen from the  parking lot entrance at the Eastman Museum, Rochester, New York.