Linda was up this morning around 7:15 and I got up at 7:45.  Since it was a travel day, we each had a cup of half-caff coffee as soon as we got up, and a slice of toast with Mango-Peach jam for breakfast.  Check-out time was 11 AM, and the check-in time at our next location, the Canandaigua-Rochester KOA Holiday in Farmington, New York, was 1 PM.  We had less than 100 miles to travel, and all but ~5 miles would be on the New York State Thruway (I-90) at 65 mph.  Linda called the KOA to see if we could arrive early.  There was someone in the site, but they were required to be gone by 11 AM, so no problem arriving after that.  We targeted a 10:30 AM departure in order to be there by 12:15 – 12:30, and started breaking camp around 9 AM.

I often do not have too many photos (if any) for travel days, and we rarely venture out after we arrive and set up camp, other than a quick grocery and/or fuel run.  That affords me the time (luxury) of being able to wax philosophical, to contemplate and reflect on the more general experience of being extended-time RVers.  Thus, I seem to have the most to say on the days where we have had the least to do.

This was our second of two, two-night stays in a row.  We had a very nice stay at The Villages at Turning Stone RV Park in Verona/Oneida, New York.  It was an attractive, and well-maintained park, and we were able to do our laundry in their nice laundry room.  There wasn’t much for us to do here, however, as we had no intention of visiting the casino, the resort restaurant, or the live music venue.  Still, we could have sat here another day, especially if the rain let up and the sun re-appeared.  But also, because a two-night stay is actually more work than a one-night layover.

We go through the same process, and the same amount of work, for a two-night stay as for one of much longer duration.  For a one-night stay, we can often leave the truck and trailer hitched together and just plug in the shorepower cord.  We always travel with enough water in the fresh water tank that we can easily run off of that for a night or more (depending on how full the fresh water tank is, of course).  We also do not need to dump waste water before we pull out the next day.  That’s not a complaint, just the reasons we prefer to stay three or more nights wherever we stop.  It helps if there are also interesting/accessible things to see and do in the area.

The Villages at Turning Stone RV Park was on a municipal water supply, so I did not hook-up our freshwater pressure regulator, filter, and water softener when we arrived.  I also did not hook up the sewer hose because it was raining, and it wasn’t necessary that it be done right then.  But the tanks needed to be dumped before we pulled out, and that was my second departure task.  (My first one was to pack up my laptop computer and move our technology to the truck.)  We had prepared the trailer/truck for departure enough times by now that we had a good handle on how much time it would take; 1-1/2 hours allowed for a deliberate, but leisurely pace.

It took me quite a few small adjustments to line up the truck/stinger with the trailer/hitch, but I got it done.  The problem was the way the site curved out, restricting how far I could pull straight forward in front of the trailer.  I do better when I can start from farther away.  Even so, we were ready to go by 10:30, but decided to walk over to the office building and use the restrooms, as much to stretch our legs as anything else.  We pulled out of our site at 10:45 AM.

The drive on I-90 was smooth and uneventful, just the way we like it.  We took exit 43 at Manchester and dropped down onto NY-96, headed west to County 28 / Macedon Road, and then south to Canandaigua Farmington Town Line Road, which only ran west from there.  It was just over a mile to the KOA.  I was disappointed in our fuel economy, 10.5 mpg average, but we did travel at 65 mph for most of the trip, and the transmission shifted down frequently as we climbed grades. 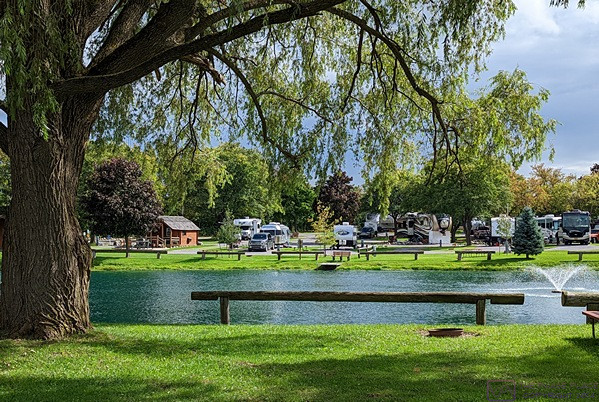 Our rig, slightly left of center frame, as seen from the other side of the pond at the Canandaigua Rochester KOA in Farmington, New York.

We pulled into the KOA at 12:30 PM.  As usual, Linda got us registered while I sync’d my phone app to the LevelMatePro+ in the trailer.  We were assigned site 18, a 50A/FHU pull-through with a patio (W3W=”hottest.sesame.dishing“).  (This was the second time we had site #18 on our trip.)  It was clear how to get to it and pull in, but a man from the campground insisted on leading us there and directing us in.  Neither service was necessary, but the escort to the site was appreciated, and he was helpful in getting me on the gravel with the truck somewhat aligned with the trailer.  He was surprised, however, that our trailer door was towards the rear and positioned us in the site where he thought we would want to be, with the door/stairs opening onto the patio.  He was wrong, but that was OK.  Sometimes the best/only thing you can do is say “thank you.”  I indicated that I needed to reposition the rig slightly, both to level, side-to-side, and position it so the truck would fit in front of it.  He returned to the office to help the next arrival.

As it turned out, I was able to back the trailer up to a position where it was level, side-to-side without having to use any of our leveling components.  And it was only 3.75” low in the front, so that was easily adjusted after we secured the trailer tires and unhitched.  As a bonus, this location put our shore connections exactly opposite the utility hook-ups.  Winner, winner, tofu dinner.  I plugged in the shorepower while Linda moved Juniper-the-Cat to the trailer.  This is always a necessary first step, as I have to lift the rear seat in the truck to get to the tools we use to for the hitching/unhitching process.

There was rain in the forecast for later in the afternoon, but for now, it was sunny with a breeze, so I went ahead and hooked up the water and sewer hose.  We had seen fire hydrants along the road, so Linda had asked in the office if the park was on a municipal water supply.  It was, so once again I did not hook up the fresh water pressure regulator, filter, and water softener.  I powered up our Verizon Jetpack Mi-Fi and moved it around the rig to find the best signal.  It ended up on the nightstand in the bedroom this time, with the Netgear flat panel antenna attached looking north towards Farmington, and the Thruway.  All told, it took us about an hour to “make camp.”

For lunch, Linda reheated the leftover risotto from Sunday night’s dinner, and served it with a banana and a slice of Italian bread.  Yum.  We went for a stroll around the campground after lunch, and watched as additional RVs rolled in every now and then.  The park was far from full, but also far from empty.

The center of the rear section of the park was clearly seasonal sites, with a variety of RVs that had obviously not been moved in a long time.  Most of them had wood patio decks, and the usual paraphernalia that clearly identifies a seasonal (permanent) RV/site.  But we understand that seasonal/permanent RVs provide an important and reliable income stream for an RV park, while requiring minimal park employee labor.  Also, seasonal sites almost always have metered electric, so the RV park does not have to be concerned with how much power they use.  They do, however, have to read the meter (usually once a month) and collect payment from the customer.

Our walk took us by the office, where we chatted with the woman on duty (presumed to be the owner).  She gave us a variety of pamphlets and brochures on things to see and do in the area, especially wineries, as we expressed an interest in those.

Back at our rig, we both set up our computers.  I checked e-mail and then started working on today’s blog post while Linda checked her e-mail and then worked on entering and reconciling our financial transactions.

For dinner, Linda made black beans & rice in the Instant Pot.  (She also used this for the risotto on Sunday.)  I always find beans & rice a tad bland, but Linda had anticipated that and put the Chipotle Tabasco sauce on the table.  She put a little on hers too, and agreed that it “kicked it up a notch” (‘props’ to Emeril Lagasse).  After dinner we relaxed for a bit with our iPads until our Tuesday evening FBI programs on CBS started at 8 PM.  Linda was off to bed as soon as the shows ended at 11 PM, and I was in bed before midnight.

We are not in “vacation” mode, because we don’t take vacations, but we have migrated into a kind of “tourist” mode, and a “returning-to-life-at-home” mode as we have approached the end of our summer/fall 2022 grand tour.  (I think this started with the Pirate Cove Adventure Mini-Golf in Bar Harbor, Maine.)  Indeed, one of our main foci in the Finger Lakes region of New York will be visiting wineries/meaderies.  This region is known for its Riesling wines, and related wines like Gewürztraminer, so we will certainly be on the lookout for those, but probably won’t buy very many bottles of either as they are common wines easily found at good wine shops.  We will be looking for wines that are a bit different from our everyday choices, but still to our taste and within the price range we are willing to pay for fermented fruit juice.  This will include “fruit” (non-grape) wines, meads, and grape wines like Cabernet Franc and Rivaner.  (Black Tower Rivaner is supposedly available at the State Liquor Store in Harrisburg, Pennsylvania, so I hope to buy some there if we don’t find another Rivaner wine before then.)