We had two very different things on our agenda for today.  The first one was the Start Trek Experience in Ticonderoga, New York.  The other was a visit to Crown Point State Historic Site on the New York side of the Lake Champlain Bridge.  This post only covers our visit to the Star Trek Experience.  There will be a second post for today’s date about the State Historic Site.

Most of this post is photos with captions.  All 30 of the photos were taken on my Google Pixel 6 Pro smartphone and processed with Faststone Image Viewer.  By way of introduction, however, the Star Trek Experience is a full-scale reproduction of the permanent set at Desi Studios that was used to film all the scenes that took place aboard the Starship Enterprise in the 79 episodes of the Original Series.  The reproduction was built from copies of the original blueprints for the set.  A second soundstage was used for all of the scenes that took place off of the ship.  As these were different for each episode, the were disassembled and replace for each one.

We had reservations for the 10 AM tour.  As you will see in some of the photos, our tour guide, whose name I failed to get, resembled and older William Shatner.  As a disclaimer, not being a Trekkie, I might have a few details wrong in the captions.  If so, feel free leave a comment with the needed correction(s).  According to our tour guide, there are about 200 things (devices, etc.) that were created for the series that did not exist at the time, and were considered very futuristic, but have since come to exist.  Think cellular communications and iPads.  We also found it interesting that William Shatner comes to this venue about twice each year.  As a final comment, the Reproduction was very well done, our tour guide was excellent (knowledgeable and funny), and we thoroughly enjoyed the experience. 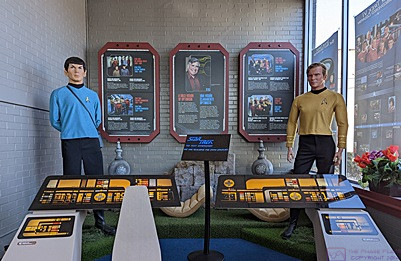 This display was in the entrance foyer. 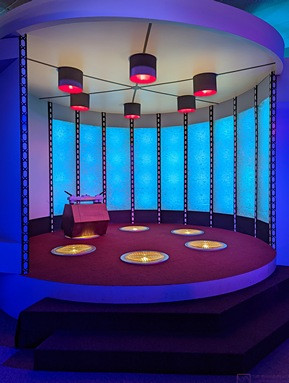 The Transporter.  The room also contained the operating consoles and devices on the walls.  While it was no doubt hard work in the props department, it must also have been quite fascinating place to be. 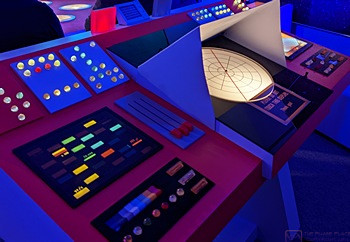 The main operating console for the transporter. 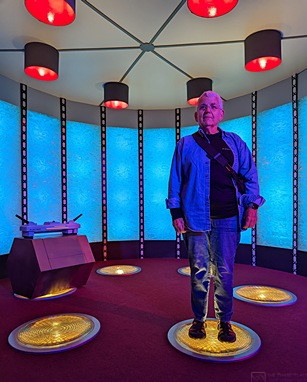 Linda prepares to be transported somewhere off-ship.  We learned that the special visual effect used when transporting people was glitter poured into a tube of water.  No CGI/FX back then; all of the special effects were done “old school” using established techniques or whatever they could invent and make work. 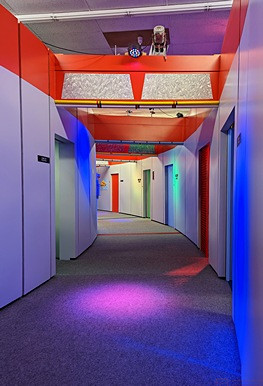 The Starship Enterprise had three decks, but this large circular hallway was used for all of them.  Note that none of the rooms on the set had ceilings, and ceilings never appear in any of the episode.  The open ceiling spaces were used for lights and other equipment. 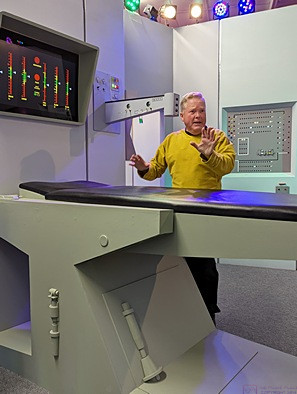 The sick bay featured remote sensing and display of vital signs and other things that would become reality some years later. 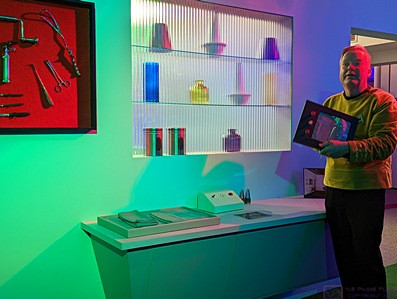 The crew had “tablets” that they could write on and have the information transmitted wirelessly to the ship’s computers.  We were still in the sick bay for this photo. 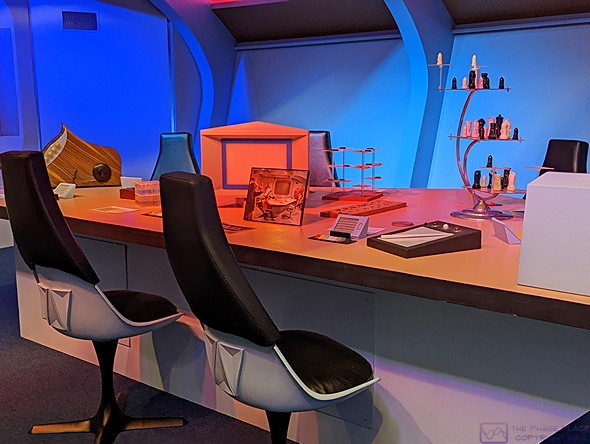 The conference room where Captain Kirk would meet with the Department Heads (Engineering, Science, Medical, and others).  Note the 3-D chess set.  3-D chess did not exist at this time, but 3-D checkers and another 3-D game did.  Both of them are also on the conference table. 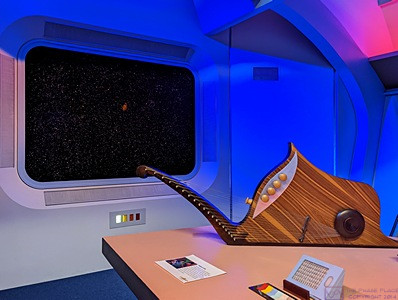 Spock’s Vulcan Harp was just a prop on the show.  This one was built many years later to match the show prop, but actually works.  The back side was heavily autographed by various cast members. 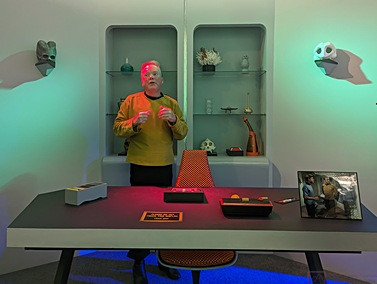 We think this was Dr. McCoy’s office, but are not sure if that is correct. 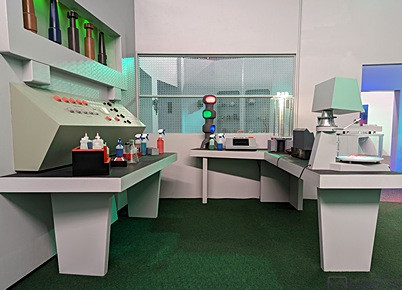 The science lab.  What is hard to tell from many of these photos is just how large (or small) these rooms are.  They seemed rather spacious to us, but by the time they were filled with actors, directors, and production equipment and crew, they probably felt small. 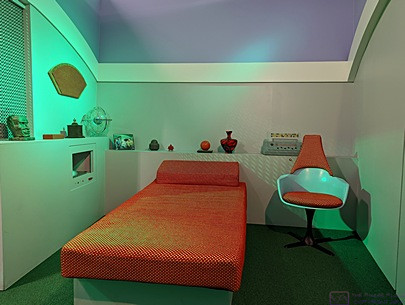 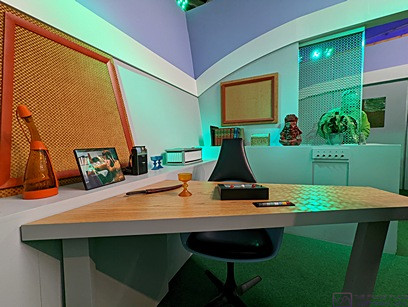 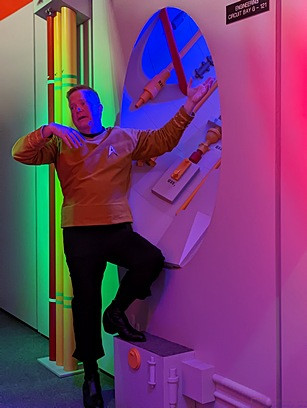 The access tube for one of the engine pods. 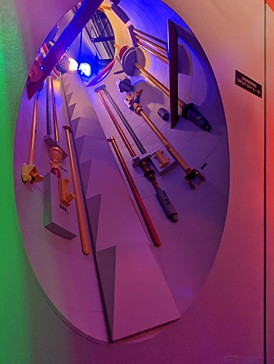 A view inside the engine access tube with all of the tools stored on the wall of the tube. 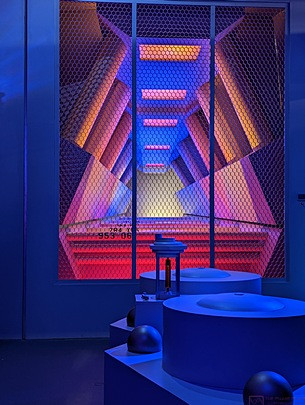 The Hyper-Drive in the engineering bay.  Very impressive use of perspective and lighting.  The actual drive space is only about 5 feet deep. 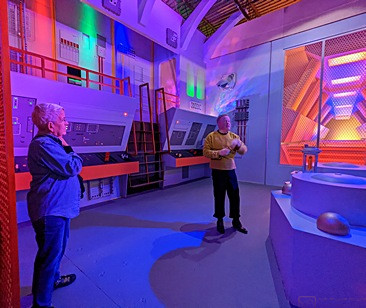 Some of the control panels in the engineering bay / engine control room. 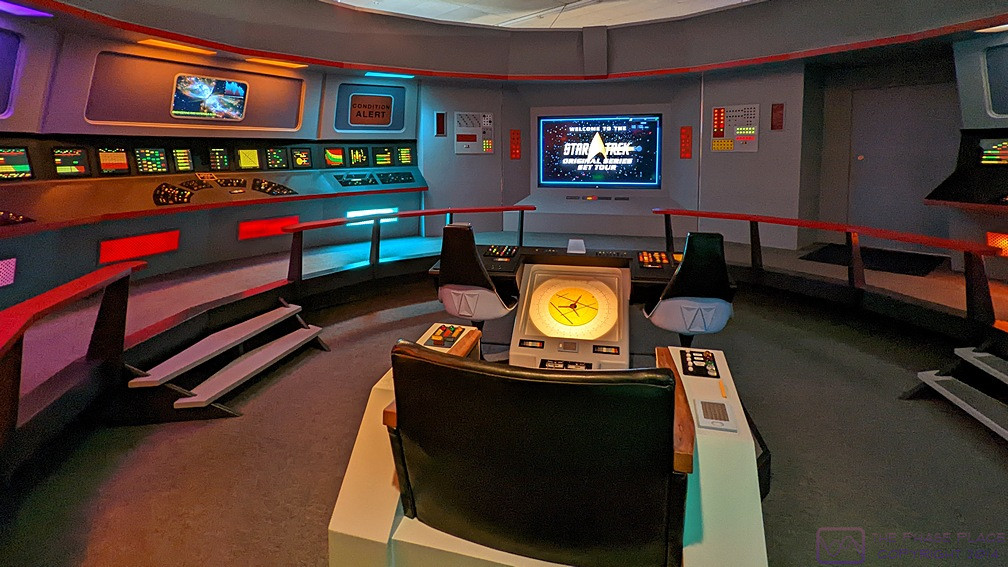 The tour concluded in the best room of all, the bridge of the Starship Enterprise. 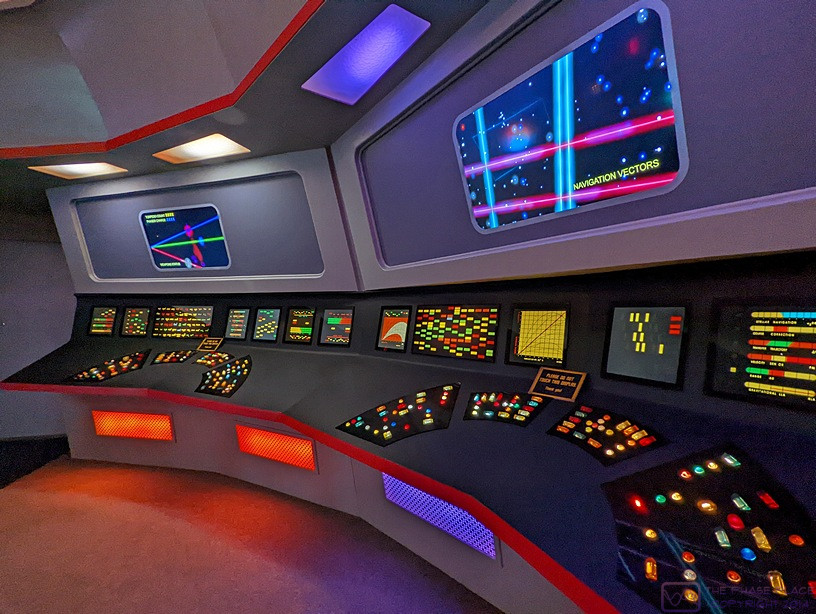 The navigation section of the bridge (I think). 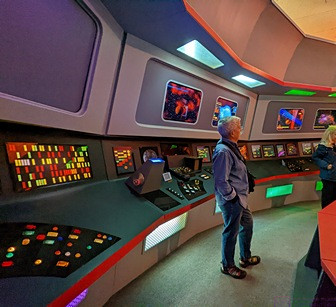 Linda on the bridge listening to our tour guide, who was very knowledgeable. 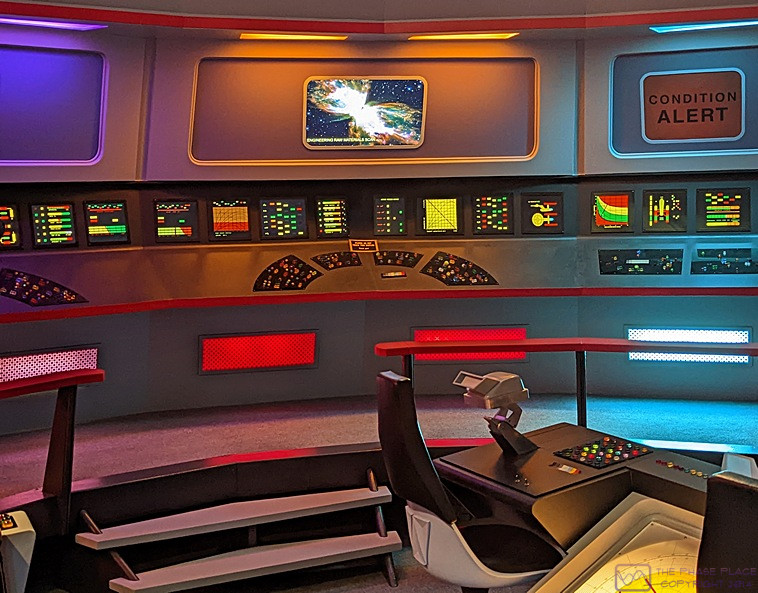 The engineering section of the bridge (I think). 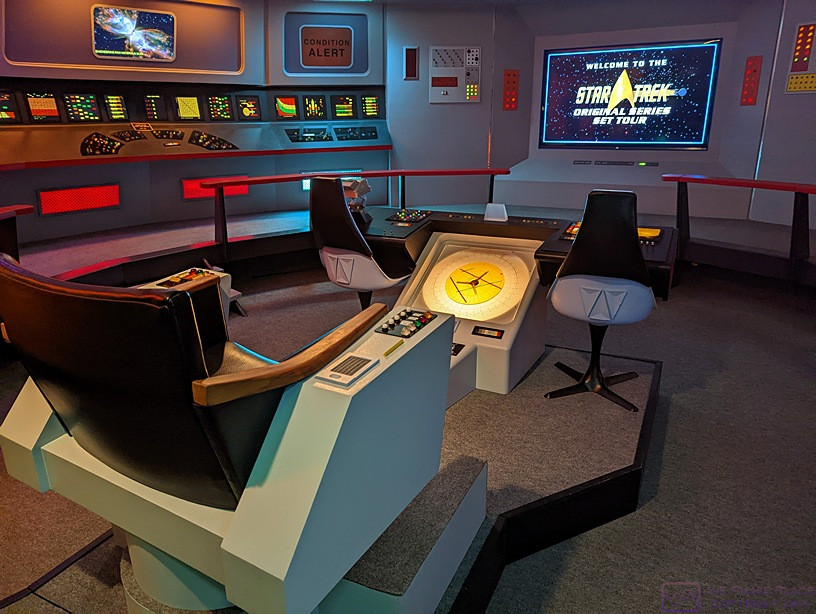 A view of the bridge looking forward from just behind the Captain’s seat. 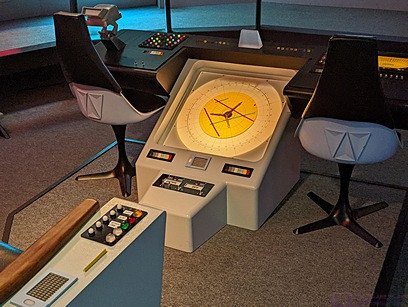 A closer view of the helm station, just in front of the Captain’s seat. 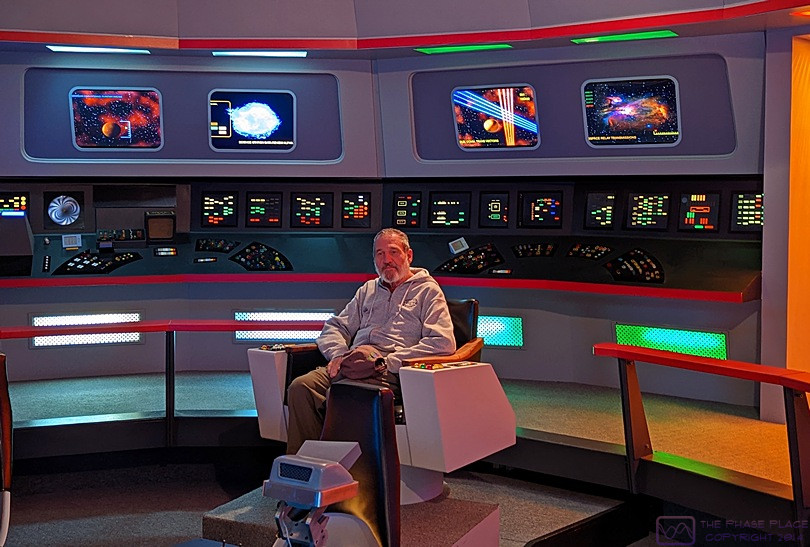 Bruce takes a turn in the Captain’s seat on the bridge of the Starship Enterprise.  (Photo by Linda.) 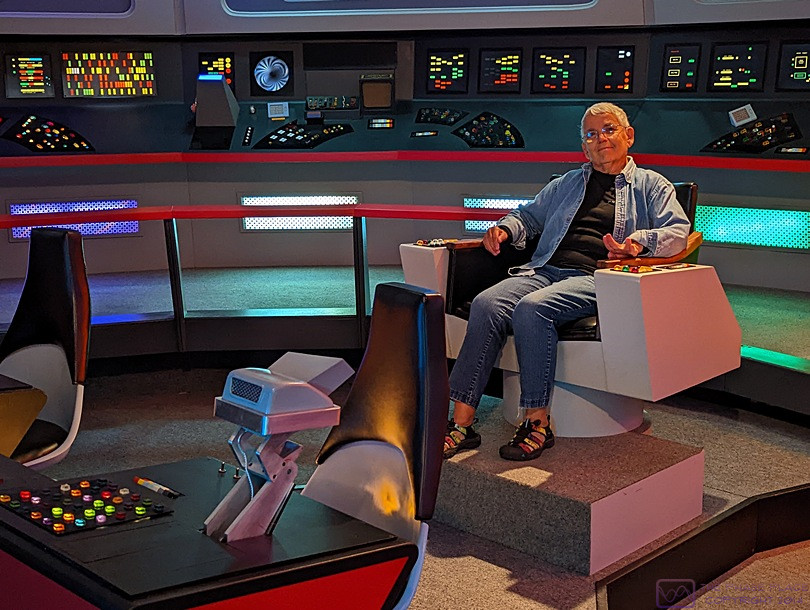 Linda takes a turn in the Captain’s seat on the bridge of the Starship Enterprise.  The reason she’s smiling is her left hand.  (I can’t do that, and she knows it.) 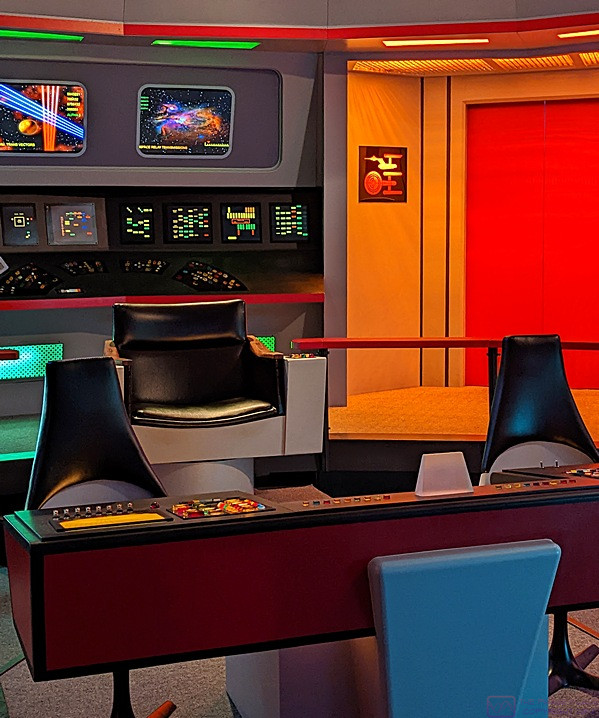 Looking aft towards the helm from the front of the bridge.  This is what you might see if communicating with the bridge via the large screen at the front. 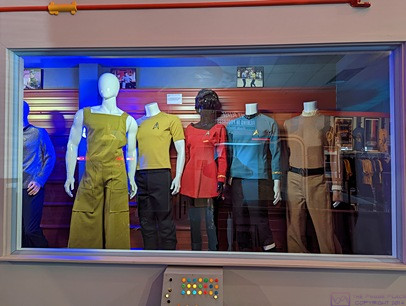 The lobby area had multiple display cases with costumes and props as well as a gift shop area. 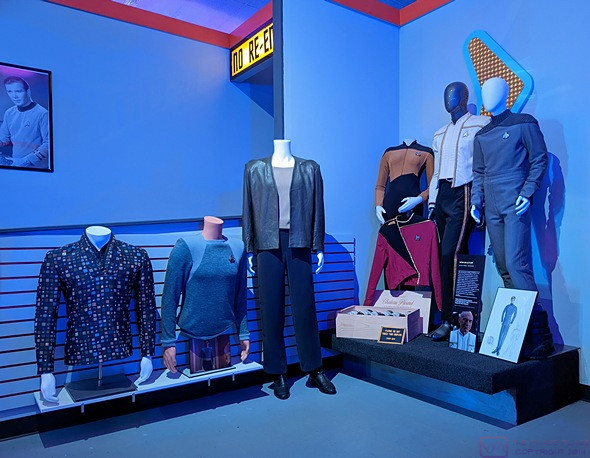