Today was a relocation day for us.  Our next campground was the Brookwood RV Resort in/near Ticonderoga, New York.  We decided to take the faster/easier route, with an estimated travel time of about 2 hours.  Check-in time was 1 PM, so we planned to pull out of our current site at 11 AM. 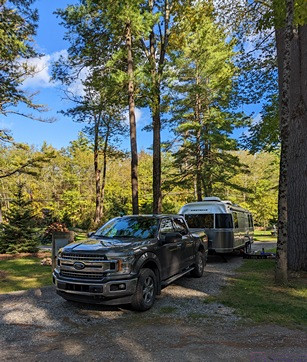 The temperature dropped overnight and we still had rain in the area, so we had the trailer closed up and one of the heat-pumps running in heat mode.  The rain had paused during the morning, so we did not have to contend with that while breaking camp, but it was cold enough to be uncomfortable handling all of the equipment, and we both commented that we needed to get some warm work gloves for this kind of situation.

We pulled out on time, and headed south on VT-100 towards Waterbury, where we picked up I-89 north towards Burlington.  This stretch of I-89 actually ran WWN until it got close to the Burlington area, where it turned north.  We exited at that point onto I-189 which ran west for a short way and ended at US-7.  We turned south on US-7 and took it as far as Vergennes, Vermont where we picked up VT-22a towards Addison.  At Addison, we turned right/west on VT-17 and followed that to the Lake Champlain Bridge.  The bridge connects Chimney Point, Vermont to Crown Point, New York.  At the border (on the bridge) the road became NY-185, which ran a short way and ended at NY-9N/NY-22.  We headed south on 9N and just stayed on it to Brookwood RV Resort.  Before getting there, however, we drove through the small town of Crown Point, and the larger town of Ticonderoga. 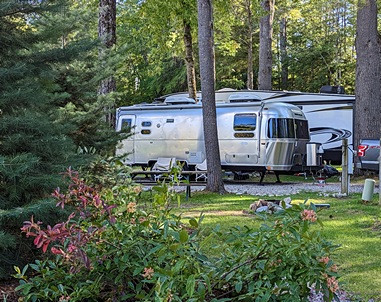 When we pulled in, Linda went to office to register and I got out of the truck to turn on the LevelMatePro+ and sync the app on my phone.  When I returned to the truck a man was waiting there.  It was Mark, one of the owners, and he was there to help us get into our site (T6).  The other owner is Buffy, who runs the office (they’re married).

We had the 50A full-hookup pull-through (W3W=”postings.universe.horsepower”) site we had requested.  It was easy to get in and the truck and trailer aligned.  We were actually completely level, side-to-side and front-to-rear.  I was pretty sure that was the first time that had every happened, and would have been perfect for a one-night stay, but we planned to do some things in the area tomorrow so we still had to unhitch the truck and re-level.  We ended up having to use our Andersen rocker levelers on the driver side of the trailer to raise it an inch. 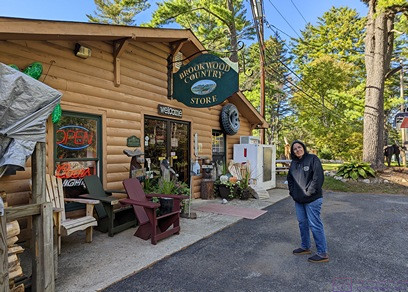 One review we read said the camp store at Brookwood RV Resort was “the best camp store they had every seen.”  It had a “north woods” cabin interior, and was very well stocked.

Mark was friendly as well as helpful, and we chatted with him for about 30 minutes before we finished setting up camp.  He had some suggestions for things to do in the area, which we appreciated.  It was a sunny, but chilly afternoon, so our only activity was to go for a walk through the campground.  There were 85 sites on 28 acres, and few rental cabins.  Over half of the RV sites were in use as seasonal or permanent sites, but they were mostly in the back part of the property.    We met and chatted with several of the “residents,” and they were all very friendly.  Still, Mark and Buffy have been thoughtful about not arbitrarily mixing “residents” with “transients,” which we appreciated.

Nadeau’s Market on NY-9N.  We passed this Country Market just before arriving at Brookwood RV Resort and passed it again driving back into Ticonderoga the next day.  We finally stopped on our way back to camp to check it out.  We bought a couple of cider donuts because … cider donuts.

One of Mark’s suggestions was the Star Trek Experience in Ticonderoga.  Linda and I are not “Trekkies,” but were certainly fans of the original TV series as well as the movies and subsequent series.  We look it up online to find out more about it.  It looked interesting, and was certainly close by.  Reservations appeared to be required for the guided tour, so Linda bought two tickets for the 10 AM tour.

The weather forecast for tonight was for temperatures to drop to 41 (F), so we had another night ahead of us with the trailer closed up and one of the heat-pumps running.