We had a slow start to our morning.  I was up at 7:30 AM, finished loading the dishwasher, and made a cup of organic English Breakfast tea.  I fed the cats and then settled in to continue reading Oystein Ore’s Number Theory and Its History.  Jasper wanted attention and sat on my lap until Linda got up at 8:30 AM.  I made a cup of tea for her and brewed a second cup for me.

Linda developed a sore throat yesterday and did not feel like working last night so we deferred final cleanup of the grout on the new floor tiles in the bus until this morning.  She was obviously still not feeling well and was tired from not having slept well last night but she was willing to help with cleaning the grout reside off of the new tiles.  Before jumping into that task, however, we stripped the bed so I could launder the sheets and pillow cases.  We needed a mop for the floor cleaning so Linda went to Meijer’s and got one and picked up some blue Scotch Brite sponge pads.  While she was gone I went to the garage, smoothed the top surface of the return air shelf for the built-in sofa with 4/0 steel wool, and applied a second coat of polyurethane.  I had just enough to finish it.  I then started preparing for the tile cleaning.

I filled two 5-gallon pails half full of warm water and added 1-1/2 capfuls of Armstrong Once & Done concentrate.  The other pail was clean water for rinsing.  Cleaning the grout residue off of the tiles in the bus involved lightly scrubbing along and across the grout lines as well as the center of each tile.  I then went over the area with the square edged sponge side of the pad.  I went on to the next set of tiles while Linda trailed along behind mopping the area.  It took us a couple of hours to do the entire floor. 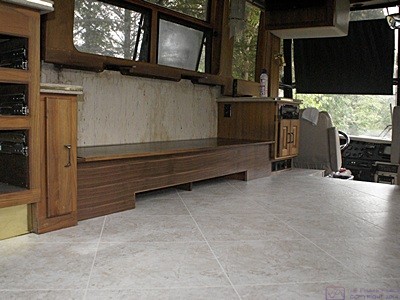 Part of the kitchen and living room floor after being cleaned as viewed from the hallway looking towards the built-in sofa.

We moved all eight pieces of the built-in sofa into the bus and set them in place.  They all fit nicely and I was especially pleased that the vertical front panel, which is walnut veneered plywood, would not have to be trimmed.

We needed to strip the wallpaper behind the sofa but could do that later.  We also needed to strip the wallpaper behind the desk and really needed to do that before installing the desk.  Ideally we would have the new wallpaper installed too but we do not have it in our possession yet.  Linda also wants/needs to get back to work on cleaning/waxing the woodwork as we wanted that done before we put the drawers back in the cabinets.  She was very tired by this point, however, and took a much needed nap. 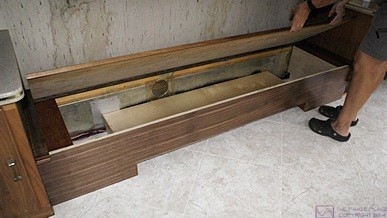 The built-in sofa with the plywood seat raised to reveal the plenum/support boxes on both ends and the center shelf that forms the air return duct for the OTR HVAC. The empty space will be used for storage.

I had some electrical things to take care of before we could assembly and secure the desk so I worked on those.  There was a 120V AC duplex outlet in a metal box on the wall where the left desk pedestal will go.  There was also a flexible plastic split loom conduit with 11 wires in it that ran from the panel next to the passenger seat to the four switches in the triangular panel and to the first of two door chimes.  This conduit was originally on the floor behind the furniture where it could not be seen but was now very visible and something needed to be done with it.  I started with the AC outlet.

I shut off the power to the AC outlet, tested it to make sure it was off, unwired the receptacle, unscrewed the box from the wall, and got the wires out of it.  I reenergized the circuit and verified which wire pair was the line (source, supply) and which was the load (power was fed from this box to another outlet by the passenger seat).  I was thinking about where to relocate the box so I would have power available under the center of the desk when I realized I had not made any provision in the design of the desk for getting power to that location.  I sat and thought about that for a while but an obvious solution did not present itself so I worked on the other wiring.

I made a diagram of the connections to the four switches so I could remove the wires and be able to put them back in the right place if needed.  All of the connections were spade lugs, male on the switch and female on the wire ends, so they were easy to remove.  The two switches with the most wiring originally controlled a motorized drawer and a motorized table.  The two DC power supply wires also had spade lugs as did the cabling from the switches to the motor connectors so I was able to remove all of that wiring and set it aside after labeling it to match my diagram.

The two wires from the doorbell switch also ran through the flexible plastic conduit to the first door chime.  Another pair of wires was spliced into the first pair and ran back to the bedroom where a second door chime was installed at the junction of the HVAC duct and dresser cabinet.  I cut all the wires at the splice, labeled the pair from the switch, and wrapped the end of each wire.  I wrapped the wires for the front chime around the box.  I then determined that I could pull the wires for the bedroom chime from the bedroom end, after disconnecting them from the chime, and remove them along with the chime box.  I coiled and taped the wires and set them aside with the box.

I now had all of the extra wires out of the way but still did not have a good solution to my electrical issues.  Two of the four switches were still functional, so the switches needed to be installed somewhere, but it was not obvious to me where they could/should go or how to mount them.  I also had two AC cables to relocate.  I decided to go inside and work at my desk.

When Linda got up she wasn’t feeling any better but she was at least somewhat rested.  We had simple, easy, but tasty meal of vegan riblets and corn-on-the-cob for dinner.  I was anxious to see how the desk was going to fit so we moved the nine pieces from the library into the bus.  It was getting near sunset by this time and we had a few moments of spectacular color before the world turned to gray and faded into night.

I folded the two AC cables down so they would be out of the way temporarily (they were still de-energized).  We set the two bases in approximately the right locations and put the two pedestal boxes on top of them.  I need to install a panel to cover the vertical mirror tiles before permanently installing the desk so I left an appropriate space for now.  I need to make a decision about the panel, however, so I can give Jarel the final dimensions for the HVAC duct / wiring chase cover.  With everything snugged up we put the drawers back in the right pedestal and sat on the sofa contemplating the new look and functionality of our bus.

I was also contemplating how I might “force” the pieces into alignment.  My first thought is to use metal or wood plates attached to the back/underside of the two pedestals to position the knee space connector piece.  I will probably also put a piece of 1×1 or a metal angle bracket on the wall to hold the back edge of the connector shelf as it will have a heavy UPS on it along with a NAS.

The installation of the new custom walnut desk may be temporary in that I may not be able to get the fan-coil heat exchangers for the Aqua-Hot hydronic heating system installed until after the upcoming GLCC rally.  I need to attach some sort of screen material to the back of the air inlet and outlet openings.  I also need to install new pieces of heater hose of the correct length and rig up some things to help get the hoses around tight corners.  This, however, will require draining and then opening some of the coolant lines.

Linda was surprised both by how big the desk is but also by how much extra room she will have in the kitchen.  I think that speaks to the inefficiency/inappropriateness of what was there before.  We were discussing the problem of getting AC electrical power to the wall area between the pedestals when the solution presented itself.  There is space at the inside rear of the right pedestal box so I can bring AC wiring from the chase through the bottom of the box, up the inside the left rear corner, and out through a hole just below the counter top and wire it to an outlet strip.  It will be completely invisible unless you get down on the floor and look up in the knee space of the desk.  It will also be conveniently located just below the notch in the center back of the countertop where power and data cables will drop through.

Linda went off to bed a little earlier than normal as she has to go to the bakery tomorrow.  I went back to my office to deal with computer updates, e-mails, and off-loading photos from my camera to my computer and the NAS units.