Although we left S. E. Michigan on June 9th, today was the last day of our first full calendar month on the road.  And what better place to spend it than at the Red Trail Vineyard near Buffalo, North Dakota, the first time/place we have (finally) used our Harvest Hosts membership.  But to get there, we had to travel 290 miles from Medora, ND along I-94.

North Dakota is a very pretty place; not as dramatic as the mountain west, but different doesn’t mean lesser.  They have had a lot of rain in parts of the state, so the fields are green and ponds seem to be full to overflowing.  On a map I-94 appears to run straight east and west, but it actually curves left and right quite a bit and for most of this leg was rolling up and down long hills.  As we headed east from Medora the rugged landscape of western ND gave way to major agricultural use and man-made structures became increasingly evident.  I-94 was a good road with very little construction, so I set the cruise control at 63 to 64, and the bus ran strong all day.  Good bus. 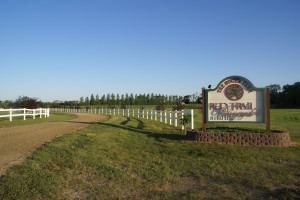 The Red Trail Vineyard is two miles north of exit 317 on I-94.  Just north of the winery is where the original/historic Red Trail passed through this area, thus the name of the winery.  Proprietor Rodney Hogan was there when we arrived but had to go take care of some things.  We got parked so that we would have an easy exit in the morning, started the generator to bring the house batteries back up to full charge, and then went for a walk through the vineyards. 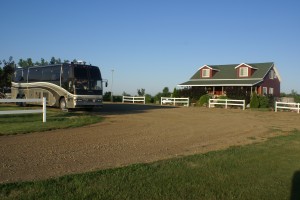 Our coach in the parking lot of the main building and tasting room.

When Rodney returned we chatted with him a bit.  He suggested we visit the town of Buffalo and gave us a pamphlet on the 1916 high school building that is now on the National Register of Historic Places.  He recommended a place in town to eat, the Old 10 Saloon, and invited us back for a wine tasting at 7 PM since another group had made arrangements for this evening. 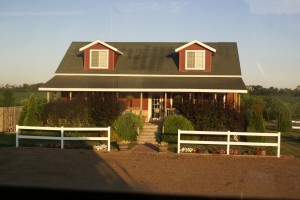 The main building and tasting room.

We paid a visit to the old high school building and met the two ladies who run it on a volunteer basis.  They were expecting us (Rodney told them we might be dropping by).  They have a collection of donated things for sale as a way to raise money for the continued restoration of the building, but we didn’t find anything we could use.  They also had fresh cucumbers and Linda took two.  They were free, but we left a donation.  They gave us a pamphlet with a map of Buffalo and descriptions of some 16 buildings dating from between 1880 and 1920, all of historic interest to the town.  We drove through the town and looked at the buildings, but did stop at the saloon for dinner as that rarely works out well for us. 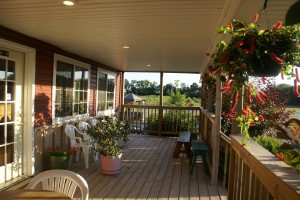 The front porch looking towards the north vineyard.

Back at the vineyard, Linda prepared a simple green salad and whole grain shell pasta with portabella mushroom and onion red sauce.  By the time we finished dinner the other party had arrived, so we joined them in the tasting room.  The building is an old grain storage shed that was moved to the vineyard from 12 miles away and then redone for its present use.  The surface of the “bar” is pine and Rodney has engraved a copy of old map of the Red Trail into the surface. 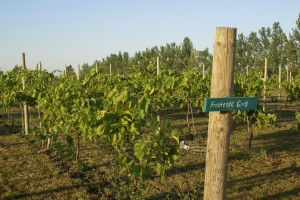 A walk among the south vineyard.

We spent two hours tasting five different wines and having a really fun evening talking with Rodney and the three ladies who were there, all of whom graduated from high school here in 1979.  One of them was related to Rodney, which is why he opened the tasting room on a night when they would normally be closed.  Rodney was an interesting and talkative fellow.  We found two wines that we liked and bought a few bottles.  We were glad that Kim and Don Greene, the owner/operators of Harvest Hosts had personally recommended this vineyard as a stopping point when we were chatting with them back in Gillette, WY six weeks ago.

(BTW:  I had no pictures to share from today.  We were off-loading photo files last night onto our computers and forgot to put the CF card back in the camera.  I have never done that before, and apparently the Sony Alpha 100 is perfectly happy to let you click away with any storage media installed.  I took some photos the next morning but have updated this post to include them here.)