[ Note:  This post covers updates on the accessory building (barn) project for the 14 days from Tuesday, October 18 through Monday, October 31, 2022.  There are three photos with captions. ]

The accessory building (barn) is so close to being done that I am getting a bit impatient for it to actually be finished.  Which is to say, to have all of the stuff the builder is taking care taken care of.  Once he is done, there will still be a lot for us to do, but most of it cannot be started until all the permitted details are complete and he has gotten the final inspections.  Top of the list, for me, is all of the electrical work that I still have to do, and the first step is arranging for our electric utility, DTE Energy, to run power to the building.  I put in my service request with them on Wednesday, October 12, and expected to hear back from a planning consultant not later than tomorrow.  I now have to design the electrical plan, which I will do in QCAD (the same software I used to design the building).

The HVAC technician (Mike) from Lakeside Services (Lakeside Heating and Cooling) arrived around 1 PM today to service the Bosch hot-water baseboard heating system for the house, and the heating portion of the Bryant HVAC unit for the library.  He was here until about 3:30 PM.

I spent most of the day at my desk working on the final post for our trip and a parallel post for the activities this past week related to the accessory building (barn) project.  I knew that the electrician might be here sometime this week, and by mid-afternoon I had it in the back of my mind that I should   check to see if he was on site.  I went outside around 2:45 PM and saw several vehicles down by the barn, so I walked down to check it out.  I could hear the unmistakable sound of a circular saw, so figured it was probably not the electrician.  I was right.

What I found instead were three vehicles and three carpenters.  The crew chief was Rob, who is Patriot Builders lead finish carpenter.  (Chuck, the owner, is a framing carpenter, and Garrett, who I met last week, does both framing and finish work.)  A bit to my surprise, they were installing OSB on the inside of the studs for the sides of the staircase, and also installing OSB on the interior of the shop and storeroom walls.  I had not realized they were going to finish off the stairs, and had (apparently) forgotten that they were going to finish off the walls.  All of which was great.  I had a brief, but very nice, chat with Rob and then left them to work in peace without any more interference from me.  I texted Chuck to let him know the guys were here and that I met them briefly.

Sometime around this date the DTE planning consultant assigned to our work order showed up on site (unannounced).  I was in the middle of painting, but obviously stopped to give him whatever time he needed.  We had a very nice chat about what I was trying to accomplish.  By the time he left, it was clear that he wanted to have DTE run power to the barn from the same transformer that powers the house.  It also appeared that he had determined that we needed a larger transformer, but also needed a new utility pole, possibly taller than the current one, located within ~5 feet of the current one.  As best he could tell from the ground, he thought our current transformer was 10KVA and said something about switching it to a 25KVA.  He indicated that wire from the junction box to the barn would be $10/foot (I would need close to 100 feet) and there would be a charge for the new/larger transformer, but probably not more than $1,500.

I pointed out that the house already has a 240V/200A main load center and 240V/100A, secondary load center (not a subpanel), and that the barn would have a 240V/200A load center as well.  I noted that 24KVA is only 100A at 240V (or 200A at 120V), so a 25KVA transformer would still be far below the capacity of my three load centers, and that my total existing loads exceed the load center capacities.  This is actually typical, as load centers never draw their full rating, and probably rarely draw half of their full rating for more than a short period of time.  Still, as long as we are going to the trouble and expense of doing this work, I wanted to make sure the new transformer was adequately sized.  (My research later revealed that the next size up from DTE is 50KVA.)

As I understood the order of events, it would go something like this:  0) Get confirmation that the meter can, load center, and an outlet have been installed in the barn by a licensed electrician and the installation has been inspected and approved by the permitting authority (Livingston County Building Department, in this case).  1)  Deliver new pole to the site.  2) Install the new pole, transformer, and terminal strip.  3) Install a junction box in the ground about 5 feet from the new pole.  4)  Disable the power to the existing transformer.  5)  Move the existing wires to the new pole.  6) Run wires from the new transformer to the terminal strip.  6) Run new/large wires down the pole from the terminal strip to the junction box.  7) Connect the existing wires from the house to the junction box.  8)  Pull the new wires for the barn from the meter box to the junction box.  (I will have the 2” PVC conduit already installed in a trench.)  9)  Install the new meter for the barn.  10)  Energize the new transformer.

He indicated that it would likely be a month before this got done, but to get the process moving along, and provide me with the cost estimate, he needed the LOAD SHEET, asap.  He also ‘suggested’ that I include any/every thing I thought I ‘might’ possible ever want to power.  I got the sense that this LOAD SHEET was part of a justification/approval process for the cost of whatever work has to be done, determining what our share of that initial cost will be, and what payback the utility company can expect.

I already had the LOAD SHEET pdf, and it indicated that most of it has to be filled out and signed by a licensed electrician.  I explained that the meter can and load center were being handled by the builder’s electrician, but that I did not have my own electrician for the job.  I explained that I have an EE background, but am not an electrician, and asked it would suffice for me to fill it out myself?  He didn’t say ‘no,’ which I took to mean ‘yes,’ or at least ‘okay, not great, but I’ll work with that.’  He also made it clear he needed it sooner rather than later.

From this meeting forward, I continued painting during the day when it was warm enough and I had some daylight to work with.  In the evenings, I worked on determining the loads I would need to power and filling in the LOAD SHEET.

The floor joists for the storeroom floor are exposed on the underside in the shop, and I do not plan to install a flat ceiling onto them.  With that in mind, I thought it might be easier to prime/paint the joists and the underside of the OSB storeroom floor with a paint sprayer.  I don’t own one and have never used one.  Thinking this might be a one-time use, not wanting to spend a fortune, and not having an air-compressor with adequate CFM or an oil/water separator/filter, I got a Wagner Control Pro 130 airless sprayer at the local Lowe’s.  I chose Killz-2 for the latex primer and Valspar Pro Storm Coat semi-gloss acrylic latex for the paint.  Even though I will be using the paint inside, this exterior paint is formulated to deal with outdoor temperatures with cracking.  It can also be applied down to 35 degrees (F), so well suited to what I needed to accomplish given the time of year.

Towards the end of the afternoon, I finally uploaded the LOAD SHEET to my DTE planning consultant, along with an Excel Spreadsheet I had created to catalog my current and future loads, both for the house and for the barn.

For the balance of this post, I am going to just include a few photos. 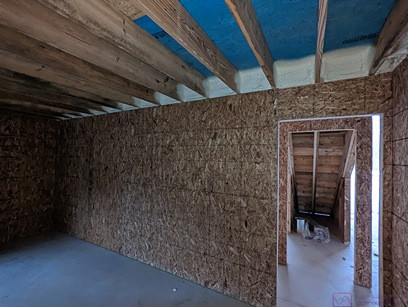 The south/interior wall of the shop with a view through the door to the area under the storeroom stairs.  Closed-cell spray-foam insulation is visible between the floor joists for the storeroom above.  The walls have been spray-foamed and then covered with OSB. 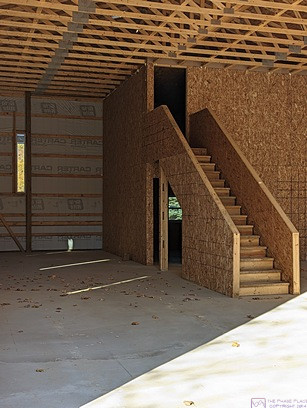 The stairs leading up to the storeroom as seen from the large/west bay door opening.  The side paneling and studs have been removed under the high end of the stairs.  The area under the landing has never enclosed as the door the to shop is there. 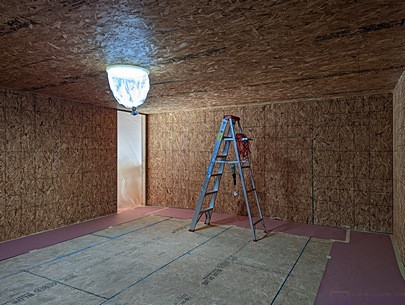 The storeroom looking SW from the NE corner.  The floor has been masked off at the base of the walls for painting.  Likewise, the Velox sun-tunnel diffuser in the center of the ceiling has been masked off.  The transparent painter’s plastic had the unexpected benefit of spreading the light out more towards the walls.  The step ladder is a 6-foot model.  The ceiling height is ~7 feet.