As usual, the exodus from the FMCA 50th Anniversary rally started early, with some motorhomes pulling out as early as 6:00 AM.  It is always an interesting experience to watch the departure process from a major RV rally.  Unlike the arrival process, which is highly organized and managed by the organization running the rally, the departure process is completely asynchronous and self-managed.  It is not, however, chaotic; to the contrary, it is quite orderly.  People leave when they need to and are ready to go, and that just seems to work out well.  They are attentive and considerate, and there’s never any congestion; just a random but steady flow of RVs.

We had considerable rain the past few days, and some of the parking areas developed minor flooding and very muddy soil.  Inevitably, some motorhomes were stuck and had to be pulled out.  We have been in that situation on two previous occasions, but our site this past week was high with good drainage and well-graveled roads.  Except for a few soft spots, notably where people cut corners too tight at intersections, there were no serious problems in Boxelder RV Park.

We had already arranged with the CAM-PLEX office to move to the Windmill RV Park this morning, so after breakfast we drove the car over to scout out a level, 50A full-hookup site.  We left the car there to “hold” a spot, which were first-come, first-served, and walked back to the coach.  We did our usual departure thing of unhooking the utilities, putting up the awnings, and otherwise preparing for the short, slow move.  We had no problems pulling out, and took paved roads over to our new site.  Once we were parked we did our arrival thing and leveled, hooked up, and settled in for the next few days.

We are staying at the CAM-PLEX while we wait for our early entry date on the 27th for The Escapees RV Club Escapade rally, which will also be at the CAM-PLEX June 30 – July 5.  We will extend our stay here until July 7 and then move to Sheridan, Wyoming for two weeks to work on a Habitat For Humanity build.  It appears that we will have to move again on the 27th to a different RV Park here at the CAM-PLEX as the Escapade is not using this one.  But for now we have 50A power, which will allow us to run our air-conditioners.  With some hot days forecast, that’s a good thing.

We decided to deploy our new Zip Dee Awnings, both to shade the coach and to let them dry out.  Much to or surprise, we discovered that we could fully deploy the large patio awning following the directions we had.  (We left our directions at home.  The ones we had came from the Zip Dee booth and did not match our hardware exactly.)  With the upper rafter arms hooked onto the roller tube shaft we could not get the latch pins on the rafter arms to engage.  Our analysis of the problem was that that the fabric was either 2″ too short or the upper rafter support arms were 2″ too long.  I wrote an e-mail to Zip Dee, but fortunately it never got sent.  Further study of the rafter arm revealed that the hook on the free end was attached to a spring-loaded inner tube that was free to slide inside the outer tube.  The available travel was just enough that the hook could be placed over the roller tube shaft AND the latch pin could be engaged.

Perhaps it is part of still being new to extended-time RVing, but the awning episode was yet another example of the emotional roller-coaster that sometimes comes with this lifestyle.  First comes the surprise and then the disappointment of discovering (yet another) problem.  This is followed by the frustration and annoyance of not being able to figure out what’s wrong and/or fix it.  Then a certain sense of helplessness arises at not being able to get assistance or parts (things always seem to break on Sunday, so it’s rarely a “day of rest”).  Next is the dread brought on by considering the possible dire consequences of continuing the journey with the problem unresolved.  A sense of resignation settles over you as you accept that the problem will remain unfixed for the time being and will probably require a change of plans and added expense somewhere down the road.  Then the “ah-ha” that comes from food, release from anxiety, and time for further thought.  And finally, the satisfaction and sense of accomplishment that comes from having figured it out and fixed it, even if only temporarily.

Along the same line, we were discussing our broken searchlight over lunch and decided that it would be better to seal it up with Rescue Tape and not use it than try to repair it.  The wires inside the base go through a hole in the roof that is not sealed.  Removing the base opens up the possibility of water getting in through that hole if I am not able to get it resealed.  As we rarely need/use the searchlight, that was too big a risk for too little benefit.

As we were finishing up our encampment routine, we had motorhomes pull in on either side of us; Peter & Sybil on the passenger side and Rick on the driver side.  Peter & Sybil had purchased a Progressive Industries portable 50A EMS from Lawrence RV Accessories during the FMCA rally.  It had been working fine, even through the big storm, but quit working when they moved to Windmill RV Park and hooked up.  I looked at the unit and noticed moisture in the LCD display (where it should not be).

I shook the unit and thought heard a sloshing sound, indicating that water had probably gotten in to the unit and shorted something out.  I checked the outlet with my multi-meter to make sure the power supply was properly wired and providing the correct voltages so they could at least plug in and have power.  Sybil called Daryl Lawrence and he answered the phone even though it was Sunday!  They were still at the CAM-PLEX and came right over.  Daryl examined the unit, came to the same conclusion I had, and swapped it out for a new one.  The PI EMS units are generally very reliable, and the company stands behind them and the vendors who sell them.  Peter & Sybil were leaving the next day for North Dakota, so this was truly great service for a great product from a great RV vendor.  (We got our Progressive Industries EMS-50 from Daryl a year or so ago and rely on it to protect our coach’s electrical systems from problems arising outside the coach.)

As long as I am on the subject of PI EMS units, when we changed campsites and plugged in I followed the maintenance recommendation I received a few days earlier from the owner regarding the buzzing coming from the unit.  Immediately after applying power, during the 2′ 16″ time delay before power switches through, I quickly cycled the contactor by moving the override switch back and forth.  Sure enough, the buzz disappeared.  (Technical note:  Although the unit is sealed, it is designed to have the cover removed so wiring connections can be made.  Dust can and will build up on the contactor contacts which results in a degraded electrical connection and the resultant buzzing.  The contacts arc slightly when they close and open, and cycling them quickly and repeatedly cleans them.) 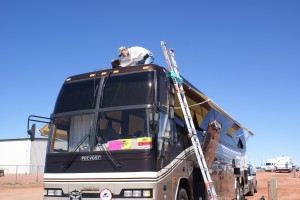 In the afternoon we got the Little Giant ladder out and configured it as a 14′ extension ladder.  I climbed up and attached the searchlight head to the base using some of the rescue tape we bought from a vendor at FMCA.  The light can still be turned on and tilted up/down, but cannot be turned side-to-side.  This is a temporary fix until we can get the bus inside at Phoenix Paint and do a proper repair with Michele Henry’s help.  This will probably be in conjunction with the GLAMARAMA rally in Goshen, IN September 18 -22.  What is unknown at this point is how well it will hold up to travel at highway speeds.  That test comes in a couple of weeks.

While I was on the roof I inspected the skylights and vent fan domes for damage from the recent hail storm, but they all appeared to be fine.  I then made a temporary installation of the WiFi Ranger Mobile Titanium (WFR-MT) by zip-tying it to the weatherhead cable entrance on the front roof.  I fed the cable through the weatherhead while Linda pulled it into the former ceiling mounted TV cabinet directly below.  (This cabinet originally housed a 19″ CRT TV.  That TV was removed and a door made by Jaral Beatty of Logansport, Indiana to cover the opening.  The door is walnut veneered plywood with solid walnut edging and Jaral managed to match the existing wood finish very well.  Because this was a former TV cabinet, AC power was already available inside.

With power to the WFR-MT, we were able to connect to the local/secure network and reconfigure it.  We were then able to select one of the public/open WiFi signals that were still available at the CAM-PLEX and connect through to the Internet.  The signals were very strong and the connection steady and reasonably fast.

After dinner we went for a walk and watched another beautiful sunset.  As dusk turned to night we witnessed the rising of a “super moon”, which appeared 14% larger than normal due to a slightly closer lunar orbit.  (The 14% is something Linda read online, we did not measure it.)

When we got back to the coach, Linda decided to watch Inspector Lewis on her iPad via our free WiFi connection.  We were able to stream the entire episode without hesitations due to frame-buffering.  That’s a pretty good WiFi connection!  A lot of RVs had left the CAM-PLEX by this time, so competition for the bandwidth was obviously less than during the FMCA rally, but it was still impressive.

Since we appeared to be on a technological roll, I decided to (finally) hookup the front over-the-air (OTA) TV Antenna, rotor controller, and TV set (monitor).  What’s this about going online to get an Access Code to enable ATSC scanning on the TV set???  Yup, our Westinghouse 22″ LCD/LED TVs require an activation code that can be obtained online, by text message, or by phone.  Fortunately, we had all three methods available to us so we got the code, entered it into the set, and away it went.  Ta-da; we have PBS and Create!  Now it feels like home.  🙂