We finished the current batch of granola for breakfast and had just finished our meal when Chris, from Bratcher Electric, showed up at 8:45 AM to service the whole house generator.  He let me watch and explained the various steps in the process.  The trickiest part appeared to be replacing the spark plug on the back side of the engine.  Everything else was fairly accessible.  There is a 1/4 turn valve to drain the oil and a rubber tube to get it out to a collection vessel.

Chris had what looked like a small gas can but it was painted blue.  It had a clear plastic tube attached to what would normally be the air vent.  The tube was sized to just fit inside the oil drain hose.  A vacuum pump was threaded on to opening where the pour spout would normally go.  A few pumps of the handle and the device sucked the oil right out of the engine and contained it so he could transport it easily and cleanly.  It was a very clever device, and obviously very handy for someone who does several generator maintenance procedures every day.

He gapped the spark plugs at 0.028″, checked the air filter (it was fine), replaced the oil filter, noting the date on the filter with a permanent marker, and put ~2-1/3 quarts of 5W-30 synthetic oil back in the engine.  He cautioned me to only use the specified filter and pure synthetic oil.  The engine runs hot under load and regular oil can lead to problems.  He checked all of the settings and changed the weekly self-test to run at full speed for the entire time.  He prefers that setting as it gets the engine up to normal operating temperature and helps burn off any moisture in the oil.  He started the unit manually, let it run for a while, and then shut it down and put in back in AUTO mode.

Linda prepared the dry ingredients for her vegan chocolate cupcakes and then put together a grocery list.  She left to go to Meijer’s while Chris was still working.  He finished up around 10:15.  I worked on the bus, using split plastic wire loom to protect the wires that power the fans on the heat exchangers.  I then worked on reconnecting the wires from the front bay electric heater to the supply wires. 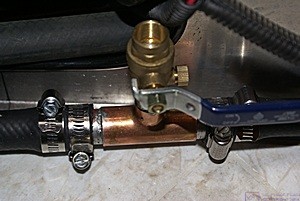 A close up view of the fill/bleeder valve assembly for the heat exchangers in the desk bases.

The supply wires run inside the HVAC duct.  They originally came out of the duct and went through a hole in the floor into the OTR air-conditioning bay and then through the partition wall into the front bay.  I had to cut the cable and pull it through the floor from underneath so I could install the new floor tile.  I could clearly see where the OTR HVAC supply duct came into the distribution duct but when I tried drilling from below I seemed to hit metal.   The bottom of the duct was clearly plywood so I drilled from above with a 1/2″ spade bit.  I got through most of the plywood but again seem to hit metal.  I knew there wasn’t anything in that location, like wires, pipes, or air lines, so I switched to a 1/2″ twist drill and finished the hole.

I dropped a screwdriver through the hole so I could locate it from below.  I then pushed the electrical cable from the heater up through the hole and secured it to a fastener on the forward wall with a cable tie.  Linda got back at this point so I helped get the groceries into the house.  She then mixed a new batch if granola and put it in the oven to bake.  I gathered up my electrical tools, uncapped the feed wires, checked them with a volt meter to make sure they were not energized, connected the feed wires to the load wires, and tucked them back inside the duct.

We had a choice as to what to work on next—fill the heat exchangers and hoses with antifreeze or hang the wallpaper in the hallway—so we had lunch.  Summer has passed, but tofu hotdogs with mustard, onion, and relish, along with some red grapes, was still a tasty lunch.

When we got back to work in the coach we decided to hang the wallpaper.  The pieces were already cut and laid out on the bed.  Hanging them not only got them off the bed, it would allow us to get the wood trim off the bed as well and back on the lower wall.  But not today.  The wallpaper adhesive needs to cure for 24 hours before we work around it and does not achieve its full cure for 5 to 7 days.  We have one piece of wallpaper to hang behind the forward end of the sofa but the wall prep is not finished in that area.  Once that piece is up, and we have the Corian top for the desk, we can complete the installation of the desk and sofa.

Shawna was bringing Madeline at 4:30 PM to spend the night with us.  It was already 2:30 and I needed to get cleaned up and put on non-work clothes before they arrived so we called it a day.  I had once again accumulated quite a few tools in the bus.  I gathered up all of the ones I was done with, returned them to the garage, and locked up the coach.  The UPS truck showed up with my package from B&H Photo which I set aside temporarily while I took a shower and got dressed.

The box looked like it had been treated well in shipment.  I opened the box, carefully removed all of the contents, and compared them to the order/packing list.  Everything was there and appeared to be in pristine condition.  I unwrapped the battery charger and Lithium ion battery, put the battery in the charger, and plugged it in.  The new charger is essentially the same as the one that came with my Sony alpha 100 years ago so I got the old one from the basement.  I bought five additional batteries so I opened one of them and plugged it in to the old charger.  I then found the Instruction Manual and curled up with it on the living room sofa while Juniper (the cat) curled up on me.

The directions with the charger and the batteries indicated that it can take up to 175 minutes to fully recharge a battery and that full charge is not obtained until an hour after the charging light goes out.  So, basically, I need to leave the batteries in the charger for three hours to ensure they are fully charged.  The camera takes one battery, and the vertical grip accessory takes two batteries, so my normal operating configuration will be to have three batteries in the use.  That’s why I have a total of six batteries for this new camera.  I will probably buy another charger so I can charge three batteries simultaneously.

I called Chuck to let him know I got my car back late yesterday but would not be able to move the windshields box until sometime next week.  It turned out that he and Barbara were also busy all weekend.  His daughter, son-in-law, and grandson were in town with more family arriving from Trinidad and Tobago this evening.  Tomorrow is his grandson’s first birthday and Sunday he is being baptized at the church in Ann Arbor where Chuck’s daughter was married.

Shawna showed up just after 4:30 PM.  Madeline had fallen asleep in the car and was slow to wake up, clinging to her mom for quite a while.  Linda brought in the various bags of clothes and toys along with the inflatable bed and got everything situated in the middle bedroom.  When Linda mentioned making cupcakes Madeline finally woke up and became cheerful.  Once her focus was on baking with Grandma Linda Shawna was able to slip away without any drama on Ms. M’s part.

Today was Brendan and Shawna’s friend Jorge’s birthday and the three of them were headed to a new restaurant in Detroit to celebrate.  The restaurant does not take reservations and is apparently very popular at the moment so Shawna was not sure if they would actually get to eat there.

With Linda’s help Madeline mixed the ingredients for the cupcakes and managed to pour most of the batter into the baking tray.  Linda then prepared dinner while I played with Madeline.  We did the ABCs on her placemat, and then colored with crayons.  Dinner was mock chicken tenders, edamame, and steamed carrot rounds with fresh orange segments and sliced strawberries, so it was mostly fresh, whole plant-based foods.

As soon as the cupcakes were cool enough to be frosted Madeline coated each one with the special Halloween orange frosting and the back and orange Halloween sprinkles.  I was summoned to inspect the work and then it was time to eat.  Madeline selected a cupcake for herself and then one for me and one for Linda.  We ate them at the table and they were very good.

After cupcakes we played soccer with two different balls, kicking and throwing them all around the house.  By 8 PM we needed to start winding things down.  Shawna had left her iPad and Madeline selected a Curious George video about Christmas.  Linda and Madeline climbed up in our bed where they could stretch out their legs and watched the first 60% of the cartoon.  I opened two more camera batteries and put them in the chargers and then joined the girls.  We will watch the rest of the cartoon tomorrow morning.

I helped Madeline brush her teeth and Linda got her into her pajamas.  Linda read her several stories and finally got her in bed around 9:15 PM.  During dinner Madeline inquired about having pancakes for breakfast.  (I had made the same inquiry over lunch.)  Linda did not have all of the ingredients she needed so after Madeline went to bed I went to Meijer’s in Howell and bought avocado oil and all-purpose flour.  Linda is trying to use up ingredients rather than stock up on them so I bought a two pound bag of King Arthur organic unbleached enriched all-purpose flour even though I could have bought a 10 pound bag of the Meijer’s brand (bleached and not organic) for only 50 cents more.

Just before going to bed I opened two more batteries and put them in the chargers.  We went to bed at 11 PM but did not turn on the TV to ensure that we did not disturb Madeline’s sleep.  I was basically done with the draft of this post and read some more of the Instruction Manual for my new Sony alpha 99 (SLT-A99V) camera and vertical battery grip (VG-C99AM).  I am really looking forward to using this new equipment but it takes a couple of days to charge batteries, install software, and read manuals enough to be able to configure it for first use.  This class of camera has a lot of adjustable parameters with default settings that may or may not be what any particular user wants.