First off, I forgot to include the What 3 Words location of our current campsite in my blog post for June 26 (it’s spacesuit.prestige.evens).

The rains that were predicted for last evening and overnight into the early afternoon today arrived, but not exactly as forecast.  I was first aware of the onset of rain at 03:24.  Once it started it continued, with a variable rate, until around mid-morning.  We waited a bit after that, just to be sure it was done, and then headed out to a nearby park.  We then went to a nearby Walmart for groceries and sundry items.

The Chaudière River (Riviere Chaudière) is on the other (south) side of the A-20/T-CH from the KOA.  There is a dam (barrage) just before the Chaudière Falls (Chutes-de-la-Chaudière) that was built to create a hydroelectric station.  Either side of the river, downstream of the falls, is “le parc des Chutes-de-la-Chaudière.”  Our destination was the part of the park on the south side of the river.  The park was not far from the KOA, as the crow flies, but a bit of a convoluted drive to get there by car.

Chutes-de-la-Chaudiere and tidal flats at low tide.  Power station behind trees to the right. 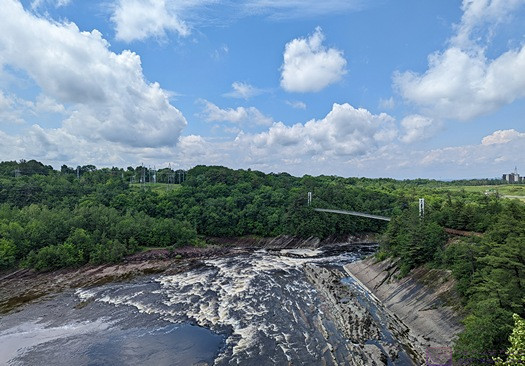 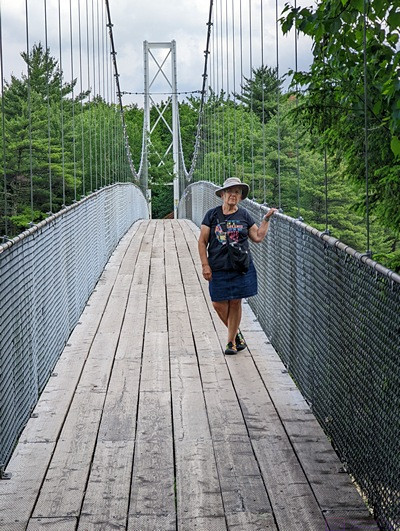 Linda on the passerelle

The river beneath the falls is a tidal flat and we were clearly there at low tide.  There was a good set of trails with excellent staircases.  There is a suspension bridge (passerelle) over the tidal flats connecting the two halves of the park on opposite sides of the river.

I was familiar with the word “passerelle” from a Youtube channel (Aquaholic) where it is used to for a gang plank that can be extended and retracted from the stern of a boat for “stern to berthing,” such as in the Mediterranean Sea.  I did not know, however, that it means “bridge”, although this makes perfectly good sense.  We ae trying to pick up a few words of French so we can make sense of signs. 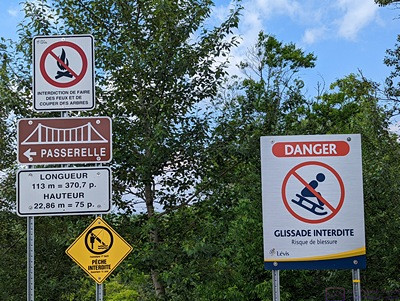 Deciphering signs in French.  “p” is the abbreviaion for “pied” which is foot.

We both needed to resupply our food.  The choice was IGA or Walmart, but we also needed a few non-food items, so Walmart got the nod.  We did not find all of the non-food items on our list.  There was a Home Depot in the same shopping plaza, but we wanted to get back to camp and get our food in the refrigerator/freezer. 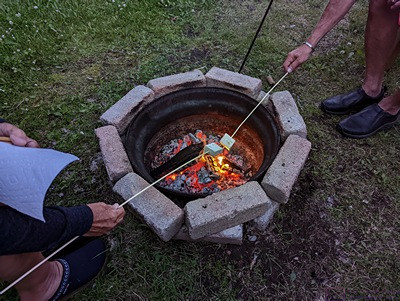 For dinner, Nancy made a green Thai curry with rice.  It was a great way to use up asparagus (Nan) and broccoli (Linda).  After dinner they made vegan marshmallows.  It took a couple of hours before they were ready, by which time we had a nice campfire.  Dessert was S’mores.