Today we finally ventured into Quebec City proper, specifically the old/historic part of town that is enclosed by the original stone fortification walls.  This post will have a few more photos than usual, as we were both using on phone cameras, and around every corner was a new view.  The weather was perfect for a stroll around town. 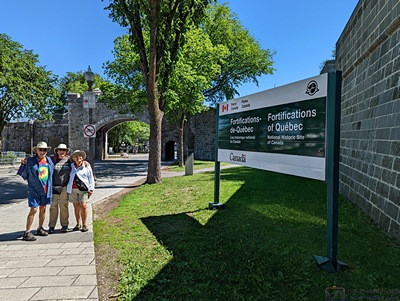 The St. Louis Gate into the walled city

As luck would have it, that part of town was setting up for a major music festival that starts in mid-July and runs for 11 days.  As with our trip to Montreal, there was a lot of construction and setup taking place, along with some road closures and detours.  Like Michigan, Canada seems to only have two seasons; winter and road construction.  The roads were not a problem for us, however, as we found a nice parking lot on Rue Saint-Louis just outside the walled city next to the Parcs Canada Plains of Abraham Museum (Musee des Plaines d’ Abraham).  And it was only 9$ for 12 hours; a bargain based on what we had seen elsewhere and online. 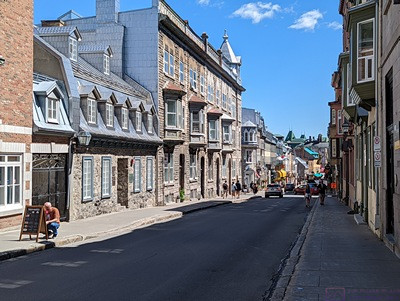 Rue Saint-Louise is one of the few streets that passes through a Gate (The St. Louis Gate) into the old/upper town. It also ran straight down to the Fairmont Hotel (Fairmont Le Chateau Frontenac), the iconic building that anchors the entire area.  It’s a 5-star hotel, impressive both inside (lobby) and out.  Part of it’s historic significance stems from 1940s when it hosted high level conferences between the Allied powers.  Operation Overlord (the invasion of Normandy, France) was planned here. 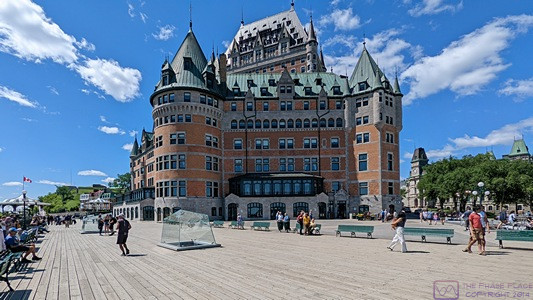 A boardwalk starts by the plaza in front of the hotel and extends southwest along the top of high cliff. 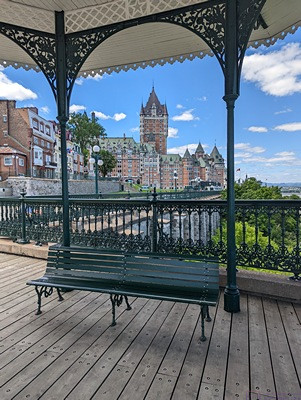 Looking back at the Hotel Frontenac from the boardwalk

Underneath the boardwalk is an archeological site, preserved by Parcs Canada.  Admission was required, and our Parcs Canada pass would have been accepted, but we did not have it with us.  This also proved to be the case for the Fort (La Citadelle de Quebec) which is still an active fort by accessible to the public.  These would have to wait for another visit and we had lots of walking to do.

Old Quebec is a very walkable, charming place, with a distinct European look and feel.  The buildings are all well-maintained and very much in use, as hotels, restaurants, shops, or government functions.  Even the US Consulate is here.  But no “families” reside here as there are no grocery stores, pharmacies, or schools.  We also found that shop keepers were able and willing to communicate with us in English.

The Governors Promenade, 301 steps, mostly up in our direction of travel 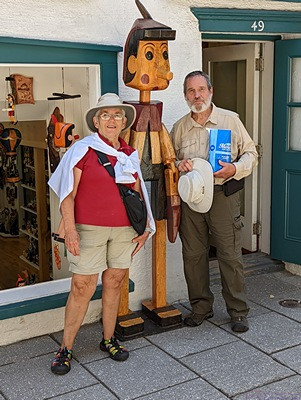 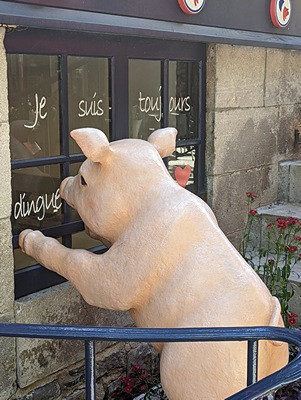 We were not sure what they were selling here, but appreciated the sense of humor 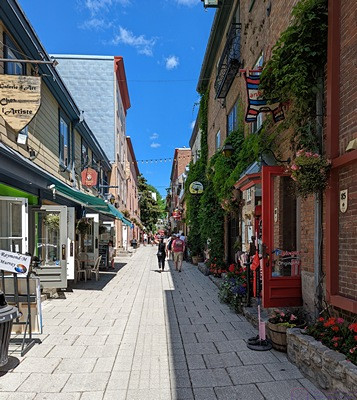 The “lower city”. Old Quebec is not level and some of the walks were steep.

I have still not figured out how to use What 3 Words to navigate, but it did confirm that we had, in fact, returned to where the car was parked.  When we got back to our travel trailer, I had a text message from Keith (our lawn care guy) with a photo of the site where the Bus Barn/Workshop will be built.  The pad and driveway approach had been cleared of grass and top soil.  This was the first evidence that site work had finally commenced on the project. 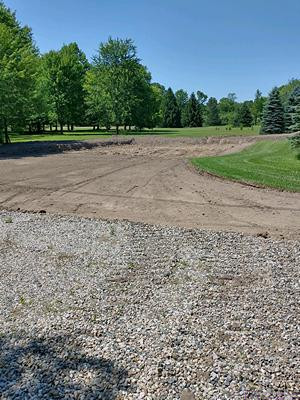 Our bus barn/workshop and driveway site prep has commenced