Just a quick, retrospective note:  It was hot today with the afternoon high temperature near 90 F.  The same was forecast for tomorrow in Quebec City.  Linda called the Quebec KOA to see if we could change our reservation to a 50A site.  The had one, so we took it.  More on this later.

Today was a travel day that took us on the Trans-Canada Highway (A-20), parallel to the southeast edge of the St. Lawrence River and deeper into the Province of Quebec all the way to Quebec City.  (We were too far from the river to see it.)  Breaking camp was a leisurely and smooth process and we pulled out as planned around 10:30 AM.  We had studied our route carefully, but the highways and signage did not match our maps and we missed our first exit from the A-15 Nord (North) to A-30 Est (East).  I find navigational mis-ques distressing when driving a vehicle combination that is 50 feet long.  Nonetheless, we were able to exit relatively soon, make a U-turn near an entrance ramp, get back on A-15 Sud (South this time) and then exit onto A-30 Est.  We were only on the A-30 for a little while before exiting onto the Trans-Canada Highway (A-20 Est).

The A-20/T-CH was very rough in any places, nice in few others, and had some ongoing construction work.  Traffic was also quite heavy; not like the 401 through Toronto, but there were lots of vehicles on the road in both directions, with many of the exceeding the posted maximum speed limit of 100 KPH (~61 MPH). We took special note of the number of RVs on the road.  Most of the ones that passed us traveling east had Quebec license plates, and we presumed that most of them in both directions were headed home after a weekend (or week) of camping.

Roads and traffic notwithstanding, we pulled into the Quebec (City) KOA around 1:45 PM, got checked in, and moved to our site close to the entrance.  By this time of the day, it was 90 F with no cloud cover and the upgrade to a 50A “Patio” site proved to be a good choice that was worth the few extra dollars.  (Patio sites include a concrete patio with furniture.  There are a small number of these site together as you come in, but most of the campground is around the corner and down a hill, and is rather large.  But mostly we were glad to have the 50A electrical hookup.) 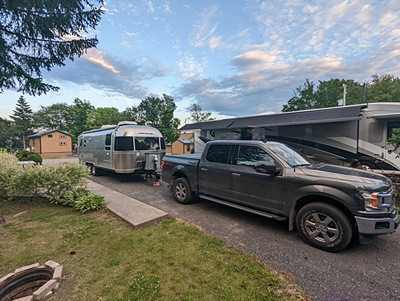 Once we were lined up in the site, I plugged in the power so we could turn on the heat-pumps in cooling mode and switch the refrigerator to electric.  We were still getting level and un-hitching when Paul and Nancy pulled into the site next to ours.  Side-by-side again, as we had been in Montreal and Ottawa (put not Kingston or Milton Heights).

We relaxed for a few hours and then had cold salad leftovers for dinner, along with a Pelee Island Gewürztraminer.  Gewürztraminer is a distinctive wine that is very much to my taste.  After dinner we checked out the camp store and then strolled the main part of the campground.  Fantasy RV Tours began their 61-day tour of Atlantic Canada last Friday at the Montreal KOA South and moved today to Quebec City KOA.  The group consists of 23 RVs, a wagonmaster, a tailgunner, and 21 guest rigs. 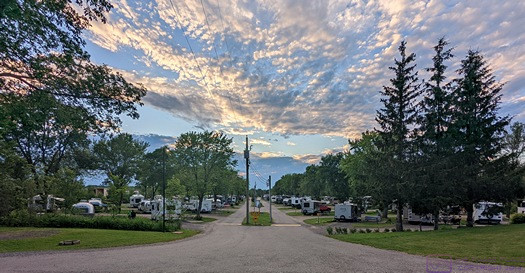 Quebec City KOA is a Holiday (middle tier) park, with cabins, playgrounds, and a water recreation area.  The later was particularly nice, so here are a few photos. 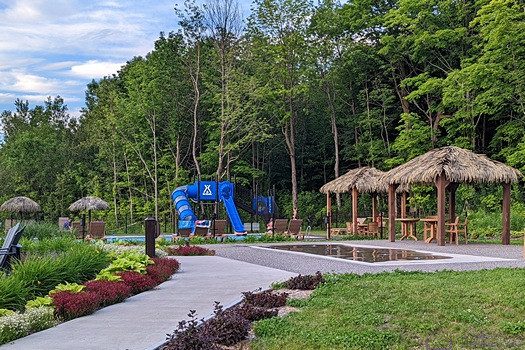 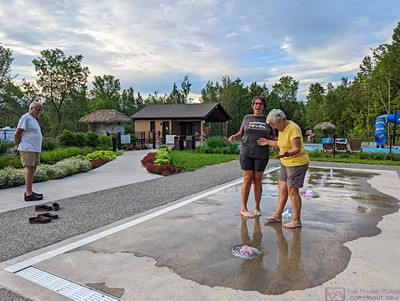 The ladies playing in the splash fountain under Paul’s supervision 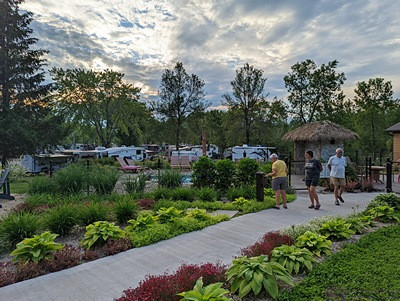 The hot tub area with part of the main campground behind

All-in-all this was a pretty nice RV park close to Quebec City and good shopping.  It should be an excellent base of operations for exploring the area and reprovisioning before moving on to the Gaspe peninsula.