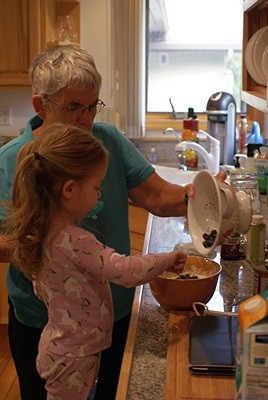 The day started with Grandma Linda’s fabulous, made from scratch, blueberry vegan pancakes for breakfast, which Madeline helped make!  After breakfast we took Madeline to the Howell Farmers Market (HFM).  She had been to this market with us once before and it was a beautiful Michigan summer morning for a return visit.  On the drive over we discussed why it is that you cannot buy a farmer at a farmers market and you cannot buy a garage at a garage sale.  English can be a funny/strange language.

We walked the entire market, which is not really that big, and Linda bought some fresh strawberries.  A couple of the regular vendors were missing.  In particular we wanted to buy some more soap from Marjorie but she was not there.  Madeline enjoyed checking out the child and doll sized wooden furniture that one vendor had for sale.  We kept an eye out for someone selling jelly beans but did not see any so we stopped at the CVS on the way home and got a small bag of them.

We had just gotten home and I was unlocking the front door when Brendan and Shawna arrived.  We had a nice visit and they stayed for a light lunch.  By the end of lunch Madeline was showing signs of being ready for her nap so Brendan transferred the car seat and stroller from Linda’s car to their car, gathered up all of Madeline’s things, and loaded their car.  Madeline left with her parents at 12:30 PM and Linda laid down for a nap shortly thereafter.

I looked at the SLAARC WordPress website on my iPad to make sure it was working.  I checked most of the pages except for the Member Only Area, which requires a login, and they appeared to be OK.  I then went to my office to deal with things that needed to be dealt with from there. 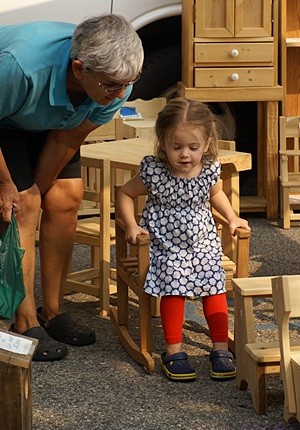 Madeline tries on a child sized rocking chair at the Howell Farmers Market.

My first task was to update the roster and financial records for our FMCA Freethinkers Associate Chapter.  I sent e-mails to new members, uploaded the updated roster to our Dropbox, and e-mailed everyone that they were available.  I had received the draft copy of the June 2015 issue of Bus Conversion Magazine on Friday.  I proofread part 3 of my 4-part article on the exterior renovation of our motorcoach and sent corrections to the editor.  I then settled in to edit blog posts.

I took a break for dinner.  Linda cooked Brussels sprouts and heated some vegan riblets.  The barbecue sauce on these riblets is very tasty.  We had vegan chocolate cupcakes for dessert and they were very tasty too.  I then went back to my office and continued editing blog posts.

I took a break just before 8 PM to join the South Lyon 2m Information Net using our new Yaesu FTM-400DR/DE RADIO but I did not hear anything except noise.  I left the radio on for a while and then turned it off.  I switched the coax to the Icom IC-7000 and turned it on but did not hear anything there either.  I turned the IC-7000 off, switched the coax back to the FTM-400, turned it back on, and went back to work at my desk.  Around 8:30 PM the squelch started opening and I heard very faint voices way down in the noise.  After listening carefully I was able to determine that it was Steve (N8AR) running the net but I could not understand most of what was being said.

It was the first time in a long time that I had tried to participate in the net and I was disappointed that the new installation of the antenna on the tower and coax cables to the radios in the basement was not working adequately.  They were working OK when I tested them with Mike (W8XH) so it could have been an unusual band condition but Steve was obviously getting in from farther to the west than our QTH.  I enjoy operating and am looking forward to finally having our larger tower up and some HF antennas in operation but for now I need to concentrate on getting the VHF/UHF stuff working reliably (correctly and consistently).

I exchanged some e-mails with Gary at BCM regarding the magazine and then continued editing blog posts.  I got through the end of June by 11 PM and quit for the night.