We were up a little before 8 AM and had a light breakfast of fruit and toast with our usual orange/grapefruit juice and coffee.  Linda left at 8:30 AM to fetch Marilyn and I stayed home to work on some minor house projects.

Before I got started I got a call back from Darryll at DCM Heating and Cooling.  He agreed that the thermostats should not allow the temperature to rise 5 degrees above the set point and offered to bring out new ones.  I suggested that I keep an eye on them for a few days and let him know if they continue to work as described in yesterday’s blog post.  He said he would check with his supplier to see if they have had any other reports of faulty units.  I mentioned that the gas pipe coming through the floor for the kitchen range was too long and he offered to take care of that if/when he was out here to deal with the thermostats.  I turned both the garage and library thermostats on and set the temperature up to take the chill off of those rooms since that was where I would be working this morning after checking in with the blogs I follow.  I checked a little later and the units had shut off with the thermometers reading only 1 – 2 degrees above the set point; still not right but a lot better than 5 degrees or more.

Karen called from Bratcher Electric at 9:30 and said that they could come on Friday between 9 and 11 AM to convert the whole house generator and do the annual maintenance.  That was good news as it will take care of our last propane to natural gas conversion.  The new outdoor gas grill and the new gas fireplace logs are just that, new appliances that do not need to be converted.  The fireplace logs have to be installed, of course, but we will have someone do that.  I will have to attach the extension hose to the outdoor grill and perhaps replace the existing quick-disconnect with the one that comes with the extension hose if they turn out not to be compatible.  With any luck both of those will arrive on Friday.  If not, it will be another two weeks.  We are also waiting on a cover for the outdoor grill.

When I finally got to work on my projects I started by installing the door latch/knob set for the utility closet.  I then replaced a duplex outlet in the NNW wall of the garage with a GFCI outlet that would also protect all of the downstream outlets on that circuit.  After completing the GFCI installation I discovered that I had installed it at the wrong point in the circuit.  I turned off power to the circuit, removed the cover plates from all the outlets on the circuit, and disconnected all the wires to isolate each outlet.  I turned the power back on and used my non-contact voltage sensor to find the supply wire.  It was in a shallow single-gang box with three 12-2+g NM cables, so there was no way the GFCI was going to fit in there along with all the wires.  I wired it up anyway and will get a box extender to create the needed space.  The better solution would be to just install a GFCI circuit breaker for that circuit, and I may do that at some point, but I am trying to use up parts I have accumulated over many years of house projects rather than buy new ones. 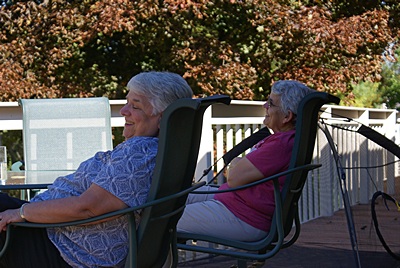 Sister Marilyn and her sister Linda relaxing on the back deck and pretending to ignore the camera (and the photographer)..

Linda and Marilyn stopped at Meijer’s on the way back to the house and got home around 12:30 PM.  We had lunch and then they worked in the kitchen using the new range to make a batch of granola and some apple crisp while I used that time to finish reassembling and testing the outlets in the garage.  When I tested them the duplex outlet between the garage doors it did not have power.  I thought it did when I checked earlier so perhaps the feed came loose from the upstream outlet.  I think I know which outlet that is and recall having to attach one of the hot wires to the side terminal because the push-in connection wasn’t holding.  Perhaps the other push-in slipped out.  I will check that tomorrow.

When I was done with the outlets I took the cover off the sub-panel, removed the 240V/30A breaker I had previously installed for the radial arm saw, and replaced it with a 240V/15A breaker which is the correct size for that tool.  I have the parts I need to install the outlet but I still need to pull the wire which was not on my project list for today.  I put the birch plywood cover panel around the box and put the cover back on the box to hold it in place.  My last electrical task for the day was to change the two fuses in the disconnect box for the new a-c compressor.

My next project was sanding drywall compound in several places and applying another coat, after which I cleaned up my tools and took a break.  I started up my computer and had 1173 e-mails.  1100 of them were from 550 e-mail notifications to two different e-mail accounts resulting from failed login attempts against two of our websites.  The brute force login attack has not succeeded, but this is starting to get annoying.  I also had an e-mail from Bill confirming that he and Karen and two others would be coming to our house on Sunday for a visit and dinner.  I suspected that the other two would be Mike and Kathy (Bill’s sister), which he confirmed later in the day.

Since I was in my work clothes I thought I would cut the grass but couldn’t get the lawnmower started.  It’s been a year-and-a-half since we last used it so I was not surprised.  I always use Sta-bil in my gasoline, but 18+ months is a long time.  I added fuel to the tank but that didn’t help.  It’s possible that the fuel I added had oil mixed in with it for small 2-cycle gas engine powered yard tools.  If so, that only made matters worse.  I put the mower away and will deal with it tomorrow, if I feel like it.

I turned my attention to the bus and removed the cover from the end of the Aqua-Hot to see if I could determine why the burner won’t ignite.  I ran it through three start cycles but it would not fire.  There appeared to be fuel flowing through the final filter but I had no way to know if it was an adequate flow and I could not see any other obvious reason why it would not start.  I jiggled the spark ignition wires and made sure they were fully attached to the ignition coil, but that didn’t help.  I also confirmed that there was no white smoke or diesel smell at the exhaust pipe, which really suggests that fuel is not getting sprayed through the nozzle.  Stupid machine.

After the apple crisp was done baking Linda started working on dinner.  She made a warm Farro pilaf with dried cranberries and roasted some Brussels sprouts.  While the main meal cooked we had a kale-chard-spinach salad with sesame seeds, cranberries, and tomatoes and a raspberry vinaigrette dressing.  I really like the way we eat, and Marilyn also enjoyed the meal.  She has been trying to make healthier food choices after seeing the results we have gotten.

After dinner I made a run to Lowe’s for a spark plug (for the lawnmower), electrical extender box, and a single gang Decora-style outlet cover plate.  I stopped at the Shell station for some fresh gasoline and then at Meijer’s for a small towel rack.  I had a quick chat with Steve (N8AR) on the South Lyon 2m ham radio repeater while driving home.  Linda and Marilyn were just finishing a game of Quadominoes when I arrived, after which we had the apple crisp they made earlier. Linda had warmed it up using the “warm” feature of the new oven.  New tools are fun.

The sisters were both tired enough to turn in by 8:30 PM but decided to stay up a while longer.  To stay awake they played Scrabble online with their brother in Pennsylvania.  They called Ron to make sure he was online and then ganged up on him.  Never underestimate the power of a nun and her sister.