As a private pilot of a small airplane there is a standard way to approach an airport that does not have air traffic controllers directing the flow of aircraft to/from the runway(s) and surrounding air space.  That standard way is called “the pattern” and when landing one must enter and follow the pattern correctly.  The pattern will be clockwise (right hand turns) or counterclockwise (left hand turns) and involves segment called “legs.”  Standard radio frequencies may let you know which runway and pattern are currently in use.

The pattern is usually entered on the “downwind leg” which is parallel to the runway with the wind coming from behind (tailwind) as much as possible.  You generally enter this leg at a specified altitude above the runway elevation and then start to descend.  How far you need to be from the runway is partially determined by your airspeed, but when I flew I would typically be a quarter to a half mile away.  As you pass the end of the runway you continue descending on the downwind leg for another 1/4 to 1/2 mile and then turn 90 degrees towards the runway. 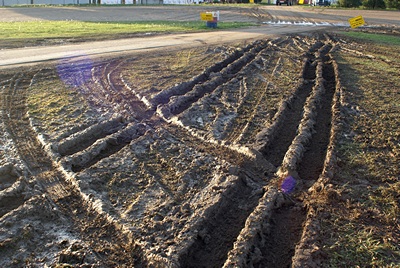 This was our way out of the Elkhart Co. 4-H Fairgrounds horse track infield. Not gonna happen.

You are now on “final approach” and descending at a rate that puts you very close to the ground as you cross the end of the runway.  On final approach you are flying into the wind as much as possible, causing your ground speed (motion with respect to the earth) to be slower than your airspeed (motion with respect to the air mass you are flying through).  This slower ground speed makes it easier to land, particularly on a short runway.  Once you are over the runway you cut the engine power, bleed off more airspeed, and put the wheels on the ground. 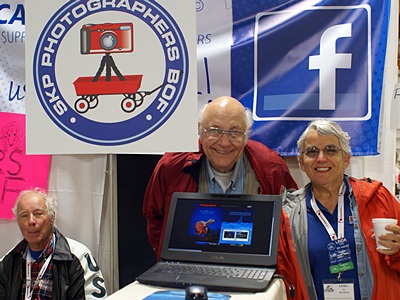 Landing an airplane is a complex task but all of the things you need to do become second nature with enough practice.  You develop a “feel” for your aircraft and the ability to visually judge altitude, distance, and speed, or use instruments to know these things.

So what does that have to do with the Escapees RV Club Escapade?  Not much, except that I have always liked analogies and today was the “base leg” of the event.  Tomorrow we “turn on final” and land.  Saturday is when we taxi from the runway back to our hangar.  For other attendees it will be a “touch-and-go” in which the landing is immediately followed by the application of full power and the airplane is taken back into the air.  Perhaps it will go around in the pattern and land again or it may vector off in some direction on a cross country trip.  I could extend this analogy in other ways, but I’m not going to. 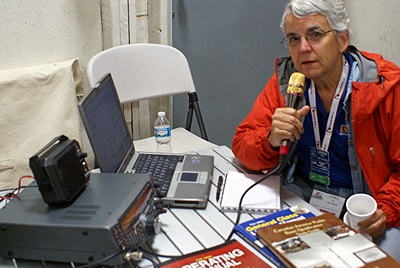 Linda at the SKP Ham BOF “row” table pretending to use the HF rig. We had a special event call sign (W9E) but not a good location for antennas.

It was cold and overcast with light rain this morning and the Escapade decided to stop running the golf carts into the infield where we are parked because they were getting stuck in the mud.  (Golf carts are not off road vehicles.)  That meant we had to walk through the mud and puddles (small lakes, really), drive our car, or stay put in our coach.  I checked-in to the 7:30 AM ham radio 2 meter net and then put on a pot of coffee.

We wanted to hear Nick Russell’s seminar at 10 AM so we drove over around 9:45.  We gave a lift to one of our fellow infield campers who was struggling through the bad conditions using a cane.  After Nick’s talk we were heading to the hospitality area when I got a call from Curtis Coleman, founder/CEO of RVillage, inviting us to his rig for a chat.  We spent an hour with him and Patty (village tart) and his dog, Augie, who was very cute and friendly.  The central focus of our conversation was FMCA and how to get the leadership to understand what RVillage is, and how an FMCA/RVillage relationship is a win-win situation.  I have been appointed to the FMCA National Education Committee, which is charged with examining this issue and making recommendations to the national executive committee and that is why Curtis and I have been trying to arrange a conversation for awhile.

Curtis had an online business meeting to attend so we made our exit and headed over to the Geeks On Tour seminar on The Cloud.  In many respects the “cloud” is just another name for the Internet, with a subtle but important distinction.  In the past our interaction with the Internet (World Wide Web) was conscious, intentional, explicit, and initiated/controlled by us.  We typed in web addresses and navigated websites.  With the Cloud, much of the interaction with the Internet has been moved into “apps” that automatically move our data around and make it accessible from multiple devices from anywhere in the world with an Internet connection.  Take a picture on your smartphone and it shows up on your laptop and tablet.  Click, click and it’s in your latest blog post which shows up in a subscriber’s aggregator/reader.  It’s not magic, but it seems like it at times. 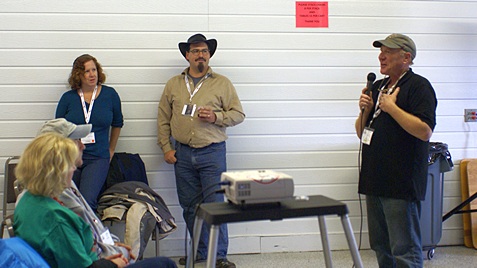 L-2-R Cherie and Chris of Technomadia and Curtis, founder/CEO of RVillage.

We went back to our rig and Linda prepared fresh grapes to take to the RVillage social at 4:30 PM.  We had a good turn out with about 90 people in attendance.  Many of them were already RVillage members, but some were not.  Just prior to the social there were 39 RVillage “members” “checked-in” to the 54th Escapade, although some of them, like us, were couples.  Everyone brought a snack, hors d’oeuvres, or beverage to share.  We mingled for a while and then Curtis connected his computer to the projector and grabbed the microphone.  He spoke at length and his vision, enthusiasm, and passion for this project was obvious.  Even those of us who are active on RVillage learned something.

After the social we moved the car over by Lou and Val’s 5th Wheel, which is parked near the Assembly Hall.  We watched the slide show and were pleased to see that quite a few of our images had been used.  We did not win a door prize, and left before the Ham-O-Rama talent show began.  Lou was there so I did not need to stay and take pictures.  Since he was taking photos I gave Val the Compact Flash card from my camera so Lou could transfer the photos to his computer after the talent show.  We then returned to our rig.

As the sun sank low in the western sky I photographed the infield of the horse track where we are parked.  The fairground is placing large quantities of gravel to try and repair the rutted, muddy mess that has developed as a result of the rains this past week and vehicle traffic going in and out of the infield.  The fairgrounds and Escapade management worked out a deal whereby we have been asked not to move our rigs until Sunday in exchange for a free night’s stay Saturday night.  We have been towed out of two other fairgrounds in the past, and would rather not repeat that experience if it can be avoided, so we will be staying until Sunday.  We would like to get out then as we have company coming for dinner Sunday night, but if not we will stay until we can.

I worked with Butch via telephone to get them set up on RVillage.  Even though they are parked next to us, we were both comfortably situated in our own buses for the evening and did not want to go back outside.  The high temperature today was around 50 degrees F and dropped quickly as the sun set.  With a strong wind from the north the wind chill was even lower.