The Escapees RV Club Escapade started on Monday afternoon and ends on Friday afternoon, so the middle of the event is sometime Wednesday afternoon.  Many attendees arrived on Sunday and many others, including us, on Saturday.  Most of the event staff, and many of the volunteers, arrived before that so today probably did not feel like the mid-point of the event to them, even though it was. 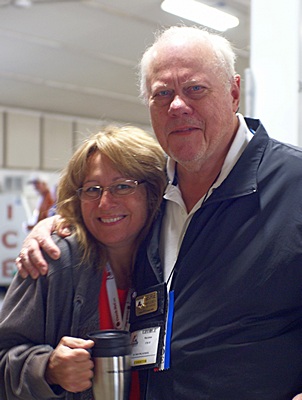 Linda still wasn’t feeling 100% so we skipped breakfast and went to the hospitality building for some coffee.  We like our own coffee better, but this coffee was included in the price of admission.  We took a stroll through the Marketplace (vendor area), which is in the two buildings adjacent to the hospitality area, and picked up a new regen tube and end caps for our portable water softener from RV-Water-Treatment.  We stopped to visit with Nick and a Terry Russell and renewed our Gypsy Journal subscription for two years.  As much as I love to read TGJ on newsprint, we switched our subscription to digital.  Printed materials are just more difficult to deal with in a mobile lifestyle.  Along with other informational and transactional activities we are trying to make our lives as paperless and mobile friendly as possible.

Our photo work continued even as the rains returned and intensified.  We tried to drop in on every seminar and the crafters to get photos.  Today was the Ladies Tea & Social, and some of the Ladies wore their Red Hats.  We attended the Ham Radio seminar, put on by Tom Abernathy (W3TOM), and Nick Russell’s seminar on Boondocking and off-the-grid RVing.  I got a few photos of the Ham-O-Rama (talent show) dress rehearsal while Linda went back to our coach to get some things.  As busy as we are, we always take time to smell the flowers and admire their beauty. 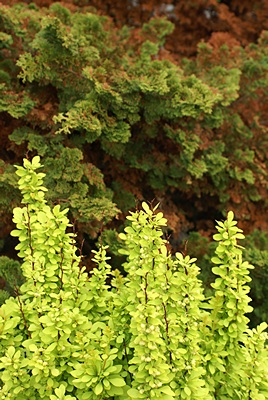 Some of the plants at Elkhart Co. 4-H Fairgrounds.

We met back at the seminar building for the Chapter 6 (Great Lakes) social.  We’ve been members of Chapter 6 for four years, having joined at the 2010 Escapade in Goshen, but to-date we have not managed to attend a Chapter 6 rally.  We may have met with other Chapter 6 members at a small social at the 53rd Escapade in Gillette, Wyoming last summer but today’s social was the first time we recalled meeting a larger group of members.  The Chapter will celebrate its 30th anniversary in September and we are planning to attend the rally if at all possible.  At the conclusion of our social I took a few pictures of the SKP Geocache BOF leaders in front of their BOF banner.  They asked if I would be willing to share the photos and gave me their contact information.

No entertainment was scheduled for this evening, leaving Escapade attendees free to socialize, go to dinner, or play cards or bingo in one of the two rooms designated for those purposes.  I photographed the bingo and then went to Lou and Val’s 5th Wheel so Lou could transfer my camera photos, and Linda’s cell phone photos, to his computer.  A few of the images will be used in an upcoming Escapade slide show and subsequently by the Escapees RV Club for other purposes. 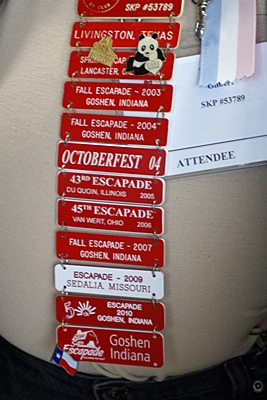 I had planned to work with Butch on some things this evening but by the time I got back to our coach it was an hour later than I had expected.  I chatted with him and Fonda for a half hour and then retired to our rig for the evening.  Nick Russell had asked if I would send him some of my photos (of him).  I went through all of the photos I had taken thus far and found the ones that included him and/or Terry.  I resized them to a maximum dimension of 1936 pixels (from 3872 for the hi-res JPEGs that come out if the camera), reducing each file to 25% of its original size, put them in a Dropbox folder, and e-mailed him the link.  I did the same thing for the SKP Geocache BOF photos.  By the time I checked and replied to e-mails and logged in to RVillage it was way past bedtime.