I got up briefly at 6:30 AM to close the roof vents as a stray rain shower drifted over Jetty Park (JP).  I got up again around 7 to put some fresh food in the cats’ bowls so they would stop trying to get us up and then went back to bed.  Linda was up around 7:30 AM to take her last steroid pill and I finally got up to stay at 8:30.  I walked over to the office around 9:15 but it was closed until noon for store inventory.  I knew that from yesterday but had forgotten.  I walked back to our coach and brewed a pot of Ethiopian Yirgacheffe half-caffe coffee, which was much better than the office coffee anyway.

It was sunny but humid this morning and by 10 AM it was up into the 80’s in the coach so we closed up and turned on the air-conditioners.  Linda has been doing accounting work for the bakery but was waiting on a document from the controller so she walked over to use the shower facilities.  I worked on filling in yesterday’s blog post until she returned and then I walked over to get my shower.  Back at the coach I exchanged text messages and phone calls with Vickie regarding plans for today while Linda exchanged text messages with Mara regarding a possible meetup next week. 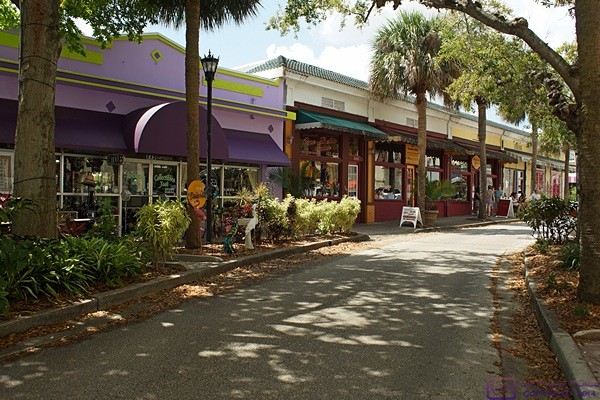 Pat and Vickie picked us up at noon and drove to Historic Cocoa Village on the mainland.  It was all boutique shopping and restaurants but still quaint and interesting enough.  Linda located The Garden of Eden Cafe and Bakery on Happy Cow but it was no longer in business and we ended up driving back to a Steak ‘n Shake on Merritt Island for lunch.  It was right on the 520 Causeway so it was very convenient.  Linda, Vickie, and I had garden salads and Pat had a hamburger.  I also ordered onion rings.  The salads were good but the onion rings were some of the worst I’ve ever had.  They were very greasy which was probably due to the fry oil not being hot enough.

We stopped at the Ron Jon Surf Shop (RJSS) in Cocoa Beach on the way back.  In the six years that Pat and Vickie have been coming to JP they had never visited the RJSS.  Linda wandered away from the group so I followed her, after which we could not find Pat and Vickie.  It turned out that they also got separated.  The store is big, with two floors, but not THAT big.  It is, however, crammed full of merchandise and the layout made it hard to see most of the store from any given vantage point.  It was also packed with people, which further obscured my view, but through text messages and phone calls we eventually all ended up in the same place and finally drove back to JPCG. 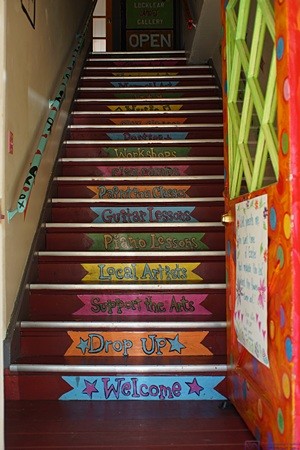 It turned out to be a very warm, humid, partly cloudy day and we were glad we had closed up our coaches and turned on the air-conditioners before we left.  Jasper and Juniper were glad too, and also glad to see us.  I walked over to the office to see if any full hookup sites had opened up, but they had not.  There wasn’t anyone else in the lounge area so I switched the TV to The Weather Channel to get a sense of the national and local weather situation.  A line of strong to severe storms was draped from Michigan’s thumb all the way to the Gulf of Mexico at the Texas/Louisiana border.  It was moving east across the continent with numerous severe thunderstorm watches and warnings, and a few tornado watches and warnings, ahead of it.  The northern tip looked like it would pass through our hometown but be below severe intensity.

Back at the coach Linda had resumed working on accounting for the bakery.  I checked e-mail, replied to one from Gary at BCM, and then logged into RVillage to deal with another one.  Scott and Tami had requested to join the CCO group, which is private, so I had to approve their request.   I also updated our checkout date at JP to Wednesday, April 6.  I updated the Excel spreadsheet that I use to track water/tank/softener usage and was just finishing up when I spotted the Carnival Victory cruise ship coming down the shipping channel from its dock at Port Canaveral.  I grabbed the camera and hurried over while Linda locked the bus and followed me.

It was hazy due to the heat and humidity but I clicked off a few photos anyway.  We knew that one of the Disney cruise ships would also be setting sail shortly so we stuck around the channel and walked down towards the pier looking for a better/different vantage point.  These ships always leave between 5 and 5:30 PM heading east down the channel so it is not an ideal time of day to photograph them as we are looking northwest if we want to see the bow.  Once they pass us we are looking northeast with the sun over our left shoulder so the lighting is much better.  I might do better driving up to the Exploration Tower area of the Port and trying to photograph the Disney ships as the leave the dock.  There’s a lot more ‘stuff’ up there (boats buildings, cranes, etc.) to provide foreground and framing, but it might also just obscure the view.  I won’t know which it is unless I investigate it, which I probably will not do on this visit.

At 5:30 PM I spotted the Disney Magic coming out of its terminal basin into the main channel.  It took a while to get into position for the photographs I wanted to take.  After it cleared the shoreline and another set of buoys it turned southeast.  Linda checked the schedule latter and found out it was headed for the Bahamas on a three night cruise.  She also learned that the Magic and the Dream are the only Disney Cruise Line ships that sail from Port Canaveral, which explained why we saw them as often as we did. 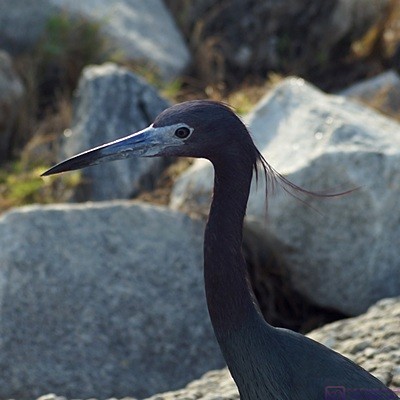 We headed back up the channel towards the west and stopped when I spotted the dorsal fin of a dolphin breaking the surface of the water by the entrance to the submarine turning basin.  We saw it three or four times as it headed back towards the ocean but then it disappeared.  While we were standing there chatting with a local resident a Little Blue Heron flew over and landed about five feet away from me.  It was looking for a handout, which we did not have, but I was able to walk around it and photograph it from different directions for a few minutes before it flew off in search of better prospects.

Back at our coach I worked on this post while Linda started preparing dinner.  She decided to make angel hair pasta with garlic, mushrooms, onions, and sun-dried tomatoes.  It’s a favorite “go to” meal that is relatively quick and easy to prepare but absolutely delicious.  Because of our late lunch, eaten between 2 and 3 PM, we did not have dinner until 7:30 PM.

After dinner we turned on the TV and put on our usual Thursday evening comedy programs.  I needed to proofread and edit a short article that someone else wrote for BCM but did not feel like doing it this evening.  I also needed to off-load today’s photos from my camera to my computer and Vickie wanted a picture of the manatees from the Merritt Island NWR, but I deferred all of that to tomorrow.  I did, however, fill in today’s activities in my blog post.  That is something I can comfortably do on my iPad while watching TV.

Around 9 PM it was still 76 degrees F outside but we turned off the air-conditioners and opened up the coach anyway.  The temperature was forecast to only drop to about 70 but we figured we would be comfortable enough, preferring fresh air and roof vent fan noise to recirculated air and the roar of the air-conditioner evaporator fans.

Around 10 PM Linda started the update of her iPad to iOS 9.3.  That took over an hour and when it finally rebooted her tablet she went to bed.  I watched channel 6.1 (CBS) long enough to see the weather forecast and then switched to 24.1 (PBS) to watch Charlie Rose.  At midnight I tuned in The Late Show with Stephen Colbert for a few minutes and then went to bed and fell asleep.