I was awake at 7 AM having only slept for six hours, and not slept well at that.  The Magnum remote showed the house batteries at 23.9 VDC and 44% SOC.  The Fault light was also still on, and 24.0 VDC was my target voltage, so I put on my sweats, went outside, and turned on the AC power to the coach.  The charger section of the Magnum 4024 inverter/charger did not activate, which was very concerning, and I was not getting any current on L1.  Figuring out what was wrong, and fixing it if possible, was not what I planned to do today but suddenly became my first/highest priority task.  I was reminded, once again, that the RV lifestyle has a lot of unexpected twists and turns and successful enjoyment requires a willingness and ability to deal with whatever comes up.

In order to get on with our day I shut off the Magnum inverter and then shut off the AC shorepower.  I unplugged the AC cables into and out of the inverter and plugged the AC subpanel directly into the external AC feed.  I turned off the 12 VDC master switch, disabling all of our 12 VDC devices, including our water pump and the control circuitry for the auxiliary air-compressor, and disconnected the positive 24V battery cable from the Magnum 4024, removing power from the unit.  I turned on the shore water and at that point we were able to use the coach, at least as long as the auxiliary air pressure remained high enough to operate the air-flush toilet.  Worst case was that we might have to use the small portable air compressor and/or start the main engine occasionally to pressurize the system. 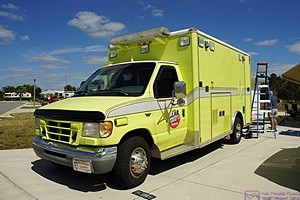 There wasn’t a medical emergency at our coach. This is Bill and Brenda Phelan’s mobile workshop RV on our site (#230) at Florida Grande Motorcoach Resort in Webster, FL.

My next priority was making coffee and having breakfast.  Bill and Brenda Phelan were due to arrive at 9 AM so we needed to be up, dressed, and ready for them.  I called Brenda at 8:20 AM and she said they were on the way and would arrive on time.  I drove up to the main gate at 8:45 and waited for them.  When they arrived I directed them to our site and then drove back myself. 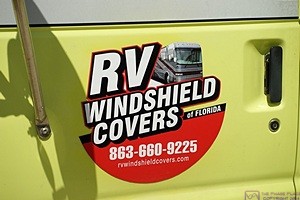 Bill and Brenda Phelan have several businesses, but this sign on the door of their mobile workshop RV says it all.

The first time we met Bill and Brenda was when we attended the Arcadia Rally 2014 (at the end of December 2013).  They took over the operation of the rally starting with the 2012 gathering at the end of 2011, and ran it for five years, but it was not their main business.  They had several businesses including a food concession trailer (The Fry’in Saucer) that they just sold.  Their main business is making windshield covers, tire covers, windshield wiper and mirror covers, and patio mats.  We ordered tire covers and windshield wiper covers from them at the Tampa RV Supershow in January and they shipped those to use at Big Tree Carefree RV Resort in Arcadia a few weeks ago. 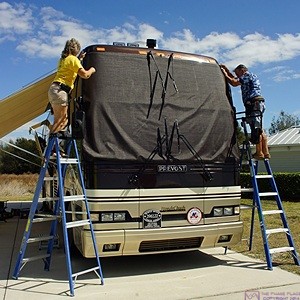 They were here today to make external covers for our bus windshields and the glass on both the driver and passenger sides of the cockpit.  They operate RV Windshield Covers of Florida as a mobile business out of a very unique vehicle.  Having converted a couple of buses into motorhomes they bought a used EMS truck (ambulance) and reconfigured it as a small motorhome with an industrial sewing machine and storage for all of their tools, materials, and supplies.  The window covers are custom made on site, so the mobile workshop is a necessity.

After looking at our coach and discussing the job with us, we decided to have one large cover for the windshield, on large cover for the driver side fixed windows, and three covers for the passenger side.  The reason for three covers on the passenger side was that the door has a window that opens and we wanted to be able to cover it independently.  That required the fixed windows above it and to the rear of it to each have their own cover.  Basically, the work went as follows: 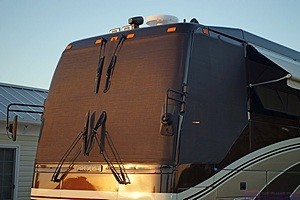 While Bill and Brenda worked I called John Palmer to get his opinion about the Magnum 4024 problem.  He suggested that I reset the unit and see if that cleared the fault.  If not, he suggested I call tech support.  He confirmed that he had a couple of units in stock if I needed one, and also had high end standalone chargers. 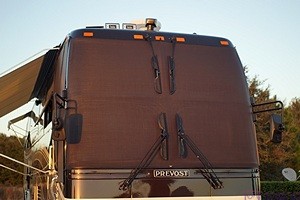 I wanted to go through a careful diagnostic procedure before calling Magnum T/S.  I found the manual on my iPad and looked at the diagnostic and routine maintenance procedures.  The wiring appeared to be good and power was making it through the Progressive Industries EMS unit.  I thought I had reset the unit earlier but according to the manual I had not done it correctly, which is to say, I had not actually reset the unit.  Followed the directions and voilà!  I called John back to update him. 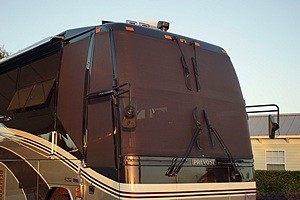 The three passenger side covers are clearly visible here along with the windshield cover.

When Bill and Brenda were done working we got out four chairs, visited for a while, and gave them a tour of the interior remodeling work.  We were impressed with their on-site fabricating and installation process and very pleased with the way the covers turned out.  The chocolate brown mesh fabric is the same one we chose for our tire covers and complements the paint colors on the bus, including the chocolate brown upper body.

Once Bill and Brenda left Linda changed into her swimsuit and went to the pool while I took a nap.  Linda eventually returned from her swim, I eventually woke up from my nap, and we eventually had dinner.  At least I presume that we did as I did not finish this post at the time and am editing it for upload to our website many months later.  I did, however, record that Joan and Bill, whom we met at the welcome party yesterday, stopped to chat, and that another couple also stopped.