Our plan for today was to visit two places in southwest Florida that we had not gotten to yet; the Edison Ford Estates in Fort Myers, and Sanibel/Captiva Islands.  As usual when we plan to leave early and be away from the coach for the day we did not make coffee or eat breakfast.  Linda walked down to Mara’s motorhome to tend to her cats while I took care of ours.  I then loaded the camera gear and a few other things in the car and drove down to Mara’s rig to pick up Linda.  We stopped at the local Bank of America ATM and then at Dunkin Donuts for coffee and a bagel for Linda.  (I had my vegan apricot bearclaw pastries from Publix.)  Suitably provisioned we headed down FL-31 to Fort Myers. 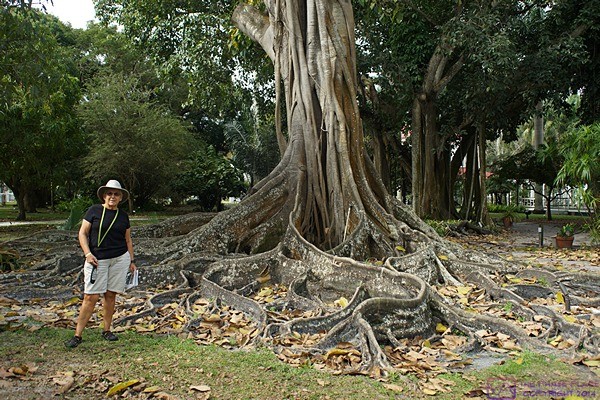 Linda stands by one of the many magnificent trees at the Thomas Edison and Henry Ford Estates. Fort Myers, FL.

The southern terminus of FL-31 is at FL-80.  From there it was about five miles (west) to the city limit of Ft. Myers.  We continued on FL-80 through downtown, which is an attractive and very upscale part of the city, to where it ends and turns into McGregor Boulevard.  Shortly after turning onto McGregor we pulled into the parking lot for the Edison Ford Estates complex at 9:30 AM. 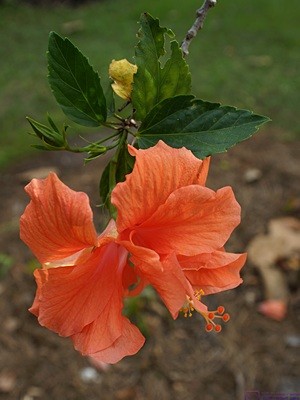 The Edison Ford Estates is a historical complex that preserves the winter estates of Thomas Alva Edison and Henry Ford on the east bank of the Caloosahatchee River in Fort Myers, Florida.  The Edison estate was named Seminole and the adjacent Ford Estate was named The Mangoes.  There are two identical houses on the Edison Estate and a more modest house on the Ford Estate.  Other buildings and structures include caretaker quarters, garages, a small office for Edison, a swimming pool, a cistern and water system, gardens, and lots of exotic trees.  When it was originally developed the Edison Estate included a pier that extended 1,500 feet out into the Caloosahatchee River.  It had trains and transport cars and was initially used to bring in all of the materials to build and landscape the Estate as these had to get to the site by ship.

Both men were workaholics and although they only used these estates for a few weeks in the winter they worked as well as socialized while here.  Indeed, Edison had a lab on the property where extensive work was done on trying to find a plant source of latex, the key material needed to make rubber, which could be quickly and easily grown in the U.S.  Edison and Ford, along with Harvey Firestone, formed a biological research company to finance this research, and presumably profit from any positive outcome.  Some 17,000 plants were tested and the one that emerged as most viable was Goldenrod.  Ford and Edison had almost 1,300 patents between them, and Edison is still the only person to have been awarded at least one U.S. patent every year for 65 contiguous years.  His greatest invention, however, could not be patented; the modern research and development laboratory. 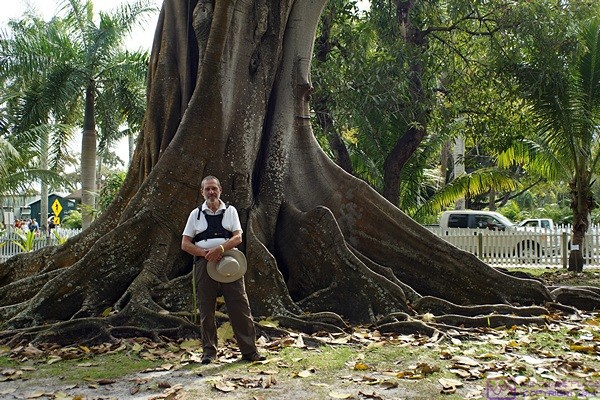 Bruce poses by one of the large trees at the Edison Ford Estates. Linda used this image for one of the weekly postcards she made and had sent to grand-daughter Madeline. Fort Myers, FL.

We wrapped up our visit to the Edison and Ford winter estates at 2 PM and headed on down McGregor Boulevard, the boulevard of Royal Palms, towards Sanibel Island.  Our initial destination on the island was an organic vegan cafe named Sanibel Sprouts.  We did not have any trouble getting onto the island or getting to the restaurant but the traffic backed up to exit the island reminded us of our recent experience in the Florida Keys and was more than a bit concerning.

For lunch we split the Mexican salad.  The salad used a base of arugula, a dark leafy green with its own unique, slightly peppery taste that was very well suited to the dish.  A vegan “taco meat” mixed with ground walnuts added depth and texture, and a dressing with cumin tied it all together.  We then split an order of waffles which consisted of two waffles topped with strawberries and bananas and served with real maple syrup.  Both dishes were excellent and I asked the cook how the waffles were made.  She indicated that they used the King Arthur brand gluten-free general purpose baking flour (rice flour based), Earth Balance soy-based vegan butter substitute (5 scoops), almond milk, and vanilla flavored Stevia sweetener.  They were fluffy, light, crispy on the outside, and very tasty.  Yum. 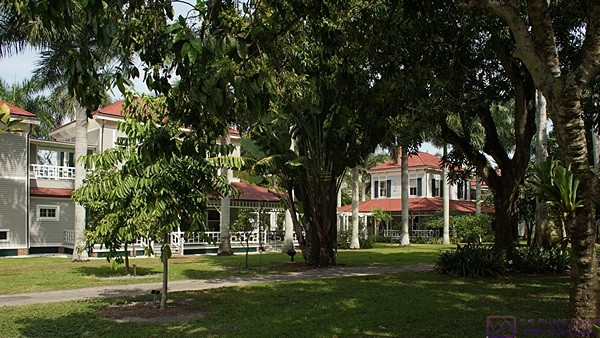 The two Edison winter homes are mirror images of each other and joined by a covered walkway. Edison Ford Estates, Fort Myers, FL.

After lunch we continued deeper into Sanibel Island.  We saw a sign for the J. N. “Ding” Darling National Wildlife Refuge Visitor Center and pulled in.  There was a one-way road through a section of the Refuge but it was a “U. S. Fee Area” ($6 per car).  We checked to see if Linda’s Golden Access Pass was valid for entry.  It was, so we went in.  Although the skies had become overcast the drive through the Refuge was an unplanned event and an unanticipated treat.  We got see a variety of birds but the highlight included two different opportunities to see White Pelicans, one of which also included Roseate Spoonbills and other birds.  White Pelicans are the second largest bird in the continental U. S. (Behind the California Condor) with a wingspan of nine (9) feet.  We also saw a couple of alligators which surprised us as the water here is connected to the Gulf of Mexico.  Indeed, the tide was coming in while we were there. 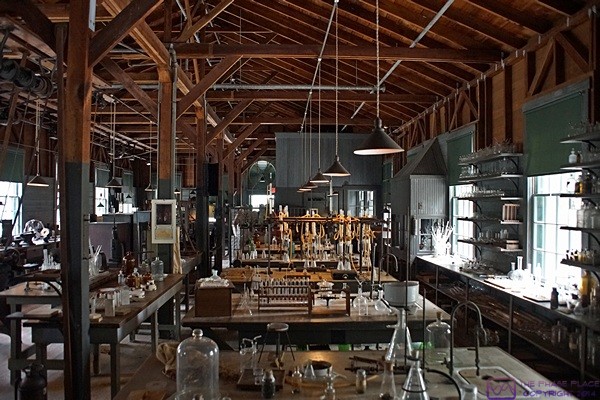 The Edison-Ford-Firestone partnership maintained an active, working laboratory on the Fort Myers estate that had year-round staff. Edison and Ford only spent a few weeks each year at their winter homes, but worked whenever they were here. Fort Myers, FL.

From the end of the drive through the NWR we continued on to the north end of Sanibel Island and drove over the short bridge to Captiva Island.  We drove to the end of the road, turned around, and drove back.  There is a lot of “island commerce” on Sanibel Island.  Captiva Island, by comparison, is mostly residential, vacation rental, and resort properties.  Many of the homes were massive, elaborately landscaped costal properties.  I estimated that houses of 3,000 to 4,000 square feet were common, 5,000 to 6,000 square feet were numerous, and some of them had to be 10,000 to 15,000 square feet.  We tend to think of the really expensive real estate in Florida being in places like Naples, Marco Island, Miami Beach, and West Palm Beach, but it’s hard to imagine that any of them are more expensive than the island mansions we saw on Captiva Island.

Rare White Pelicans at the J. N. “Ding Darling” National Wildlife Refuge & Bird Sanctuary on Sanibel Island in Florida. The White Pelicans are the second largest birds in North America, and the largest members of the pelican family. This photograph does not do justice to their size, which includes a nine foot wingspan. The pink birds (lower right) are Roseate Spoonbills.

The drive back down Captiva and Sanibel was smooth and flowed right along as far as the restaurant.  At that point we encountered the traffic backup we had seen coming in.  Traffic was not moving at all and people were pulling out of line and turning around.  Our map showed that there was an alternate way to get back to the causeway.  We suspected that the turn-arounds were locals who were headed that way so we decided to do that as well.  The traffic could not be worse and we would get to see a different part of the island.

That proved to be the case and we were only in a stop-and-go back up for about 10 minutes instead of the one-to-two hours I figured it would take if we stayed on Periwinkle Way.  We were off the island by 6:45 PM and headed back to the mainland on FL-867.  Fairly quickly we were on FL-865 headed more easterly but on a faster road.  We eventually got to US-41 (the Tamiami Trail) and headed north.  Not too far along I spotted a Panera and we stopped to get coffee.  We continued north as far as Colonial where we headed east to I-75.  From there it was five miles north to FL-80, three miles east to FL-31, and 36 miles north to our RV resort in Arcadia. 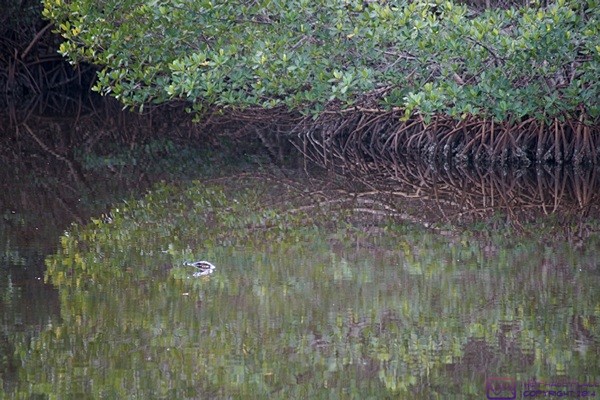 We got back to our coach at 8:10 PM.  Linda grabbed a flashlight and the keys for Mara’s rig and walked down to take care of her cats.  I unloaded the car and then took care of our cats.  I planned to check my e-mail and then settle in to watch our usual Thursday evening TV programs, but my computer and the scheduled programs altered my plan. 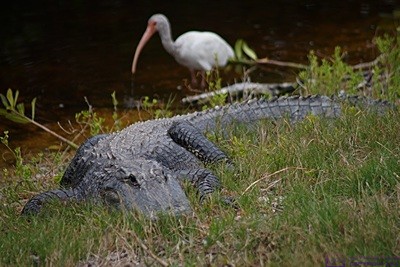 This Ibis was a little farther behind this alligator than the photos makes it appear, but not that much. Being behind an alligator is not necessarily any safer than being in front of one. J. N. “Ding Darling” National Wildlife Refuge & Bird Sanctuary, Sanibel Island, FL.

Our e-mail servers were not responding so I shut down my computer and all of our network/comm equipment and restarted everything in a specific order.  Disaster!  My computer would not log in and claimed to have missing authentication components.  This is the second time my ASUS laptop has crapped out since I upgraded it to Windows 10, and I was pretty unhappy about it.  At this point I do not have any confidence its stability, especially its update process, and think it was clearly not ready for release.  Unfortunately not upgrading really wasn’t an option.

I watched Charlie Rose on PBS followed by Tavis Smiley and a program on Black artists.  That was followed by This Old House and Ask TOH.  I think I restarted my computer several times before it finally “healed” itself and allowed me to log in.  With all of those TV programs as background I finished most of this post, off-loaded photos, and backed them up to the NAS.  I tried my e-mail again and was finally able to access it.  It was 2 AM when I finally went to bed, which had not been my plan when I got up this morning.