Madeline was in bed last night at 8 PM and fell asleep quickly.  We were in bed before 10 PM.  Linda fell asleep right away and I put my iPad away and turned off the light at 10:30 PM.  Good thing, too, as Madeline started coughing at 5:30 AM.  Linda got up at 6 AM and brought her into our bed.  I don’t know if she ever fell back asleep but we all stayed there quietly enjoying the warmth of the covers until 7:30 AM, by which time the house was warming up.  Hurrah for programmable thermostats!

Being Sunday morning, and having Madeline here, we were in no hurry to get up, get dressed, or get busy.  Not that we had nothing to do, we just were not in a hurry to do anything.  Linda prepared baked French toast last night, with a little help from Madeline, and let it sit overnight in the refrigerator.  She got up at 6:45 to pre-heat the oven and again at 7 to put the dish in to bake.

I got up at 7:30 and made coffee.  The downlight over the end of the counter where I make the coffee burned out last night so I replaced the bulb.  Linda set the table and took the French toast out of the oven at 8.  When she cut into it and served out pieces for each of us it was obvious that something was very wrong.  Instead of baked French toast we had inedible goo.  Linda has had very few recipe failures since we switched to a whole-food plant-based (WFPB) vegan diet but this one took first place.  She mentioned that it was a different recipe than she has used in the past and that she used an egg replacer she has not used before which did not seem to dissolve correctly last night.

Linda was willing to make vegan pancakes but I did not see any reason for her to go to that trouble.  We still had plenty of granola, part of a loaf of cinnamon raisin bread, and fresh berries, all of which made for an easy but tasty breakfast.] 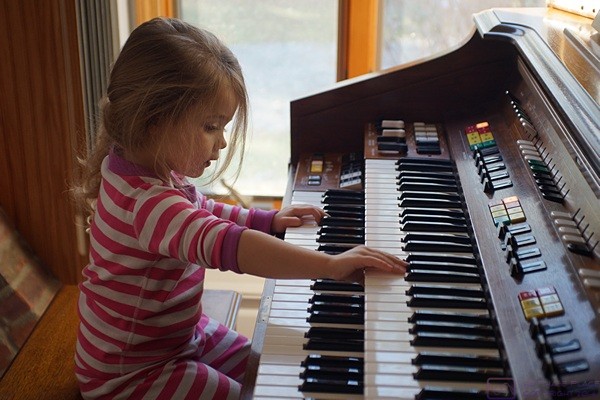 Madeline plays (at) the organ. It is one of her favorite “toys” at our house.

After breakfast I cleared the table and then read a book to Madeline while Linda cleaned off the dishes.  I turned on the fireplace and we drank our coffee in the living room while Madeline found various things to play with, ultimately ending up at the organ.

By 9:30 AM we were feeling like getting dressed.  I put in my work clothes and finally got to work in the bus at 10 after turning up the thermostats in the library, garage, and bus.  The first thing I needed to do was screw down the last/top layer of SurePly underlayment in the landing and driver area.  I used #6 SR (square recessed) self-drilling wood screws in three different lengths based on what was underneath the underlayment.  I chose to use screws rather than staples for several reasons.  The main one was that I needed the ability of the screws to pull things together.  The other reason was that I did not want to get the air compressor and stapler out for this relatively small number of fasteners.  (The SurePly underlayment for the main floor of the bus was stapled with approximately 350 staples per full 4’x8’ sheet.)

I pulled up the larger piece of SurePly one last time, measured the location of the boundary between the original bus floor and the new patch, marked the boundary on the top of the large piece, and put it back in place.  I carefully aligned the smaller piece to the stair edge and along the front and made sure the larger piece also fit correctly.  The smaller piece sits entirely on the new landing, which is 3/4″ plywood, so I secured it with 1″ screws, spacing them 2-to-3 inches apart along every edge and about 4 inches apart in the field.

The 1/2″ piece of plywood just forward of the driver’s seat was partially unscrewed and needed to be screwed back down.  Since it was installed over the original 1″ thick plywood bus floor I replaced the existing screws with 1-1/4″ screws and added more, especially along the edges.

To secure the larger piece I used 1-1/2″ screws over the patch, which was already about 1-1/4″ thick.  Over the original 1″ thick plywood bus floor I used the 1-1/4″ screws and over the 3/4″ thick landing I used 1″ screws.  I ran out of the 1″ length before I got the larger piece secured.  As much as I did not want to spend time driving around today I could not finish this task without the proper screws so around 11:15 AM I headed off to Lowe’s.  As long as I had to make the trip I looked for washers to space up the mounting bolts for the passenger seat pedestal base and nylon washers to go under the nut on the main mounting stud for the two swivel bases.  I found something that might work for the former but not the latter.

Linda and Madeline were getting ready to leave as I returned home just before noon.  Madeline was upset because Linda made her wear a sweater under her coat and she did not want to.  She is generally a cheerful and pleasant little girl but we never know when or why she is going to draw a line in the sand.  She doesn’t always or even usually get her way but she is persistent.  The tears, of course, are not the result of genuine injury and are usually quickly enough wiped away by focusing her attention on something else.  They finally pulled out of the driveway at 12:15 PM for an outing at Kensington Metropark.

I finished securing the larger piece of SurePly over the landing and then started on the next task.  I had decided to patch in an area at the end of the passenger platform where it drops down into the back of the driver area.  The area to be patched was only 12-3/4″ long and less than 4″ wide but the underlying metal was rounded over in this area and there wasn’t much I could use to attach new wood.  The area was also deep and not level.  I ended up making a sandwich with two layers of SurePly, two wood shins on top of those, and a piece of 3/4″ plywood on top.  I got all of the pieces cut and fitted and then marked them with pencil lines down the exposed edges to act as alignment marks.

I carefully assembled the sandwich upside down in the shop and screwed it together from the bottom.  I then put it in place in the bus and measured for a vertical piece with an angled rear edge to catch the outside edge of the patch and hold it up.  I secured the patch with one 1-1/2″ screw near the front and secured the vertical piece with one screw into the same piece of wood.

Building and installing this patch took a while and I was just finishing it when Linda and Madeline got home around 3:30 PM from their trip to Kensington Metropark.  By this time it was too late to start working on the underlayment for the passenger seat platform as I needed to stop working at 4 PM and get cleaned up for our amateur radio club meeting this evening.  With the little time remaining I unscrewed the top of the step and removed the two screws that held it to the rear and side walls of the co-pilot/navigator platform.  I then removed a half dozen flat head wood screws that held a piece of metal trim to the front edge of the platform.

The screws were rusted but came out.  The issue for my work was that the heads were not countersunk and stuck above the metal in a way that would interfere with installing the sheet of underlayment.  I used a 7/16″ drill bit to create tapered holes and may go back tomorrow and use my countersink bit.  I looked, but did have any appropriate screws to replace the ones I took out.  That meant another trip to Lowe’s which I could do after dinner on my way to the ham radio club meeting.

I put the two swivel pedestal/bases back in the landing and locked the bus.  I made sure everything was in the garage that needed to be and closed the overhead door.  I showered and shaved and put on clean clothes.  I then sat on the living room sofa with Madeline while Linda fixed dinner.  I worked on this post while Ms. M played games on Linda’s iPad.  It’s amazing to watch a 3-year old manipulate an iPad.  Their use of the touch screen is intuitive, which is cool, and it holds their attention in a way that other activities do not, almost to the point of obsession or addiction, which can border on troubling.  In spite of how much Madeline likes to eat, Grandma Linda had to gently take the iPad away and get her to come to the table for dinner.

As part of her food planning for this weekend Linda had picked up some mock turkey patties with gravy.  She also picked up some vegan heat-n-serve mac-n-cheese.  Those were the main course this evening along with a nice green salad and the rest of the fresh pineapple.  Dessert was going to be cake but I had to leave before it was served.

I left at 5:30 PM and drove to Lowe’s in New Hudson.  I monitored a QSO between Mike (W8XH) and Steve (N8AR) until Steve reached the meeting location in South Lyon.  I then called for Mike and we chatted until I reached Lowe’s.  I bought a box of 1-1/4′ long # 12 flathead wood screws and picked up three 40 W appliance light bulbs for the microwave in the house as the installed ones had burned out.

I got to the Witch’s Hat Depot at 6:35 PM so I had a chance to visit with my fellow hams before the meeting started at 7 PM.  Steve (N8AR) had a display set up with several different DC power meters he ordered off of EBay.  The business meeting was longer than usual because we had to elect officers for 2016.  The process was very smooth, surprisingly so actually, but still took 10 minutes.  The meeting was done by 7:20 after which the club president, Harvey (AC8NO), did a presentation on his Icom IC-7200 portable base station transceiver.

I was back home by 8:40 PM.  Madeline had already gone to bed so Linda and I had some quiet adult time to enjoy a cup of hibiscus tea.  We were both tired after long days of work and play but we did a lot today and felt good about the things we accomplished.