I guess we were tired after having Madeline at our house for 23 hours.  We slept in until after 8 AM and it was going on 9 by the time the coffee was brewed and we sat down to breakfast.  I really needed to attend to some paperwork for our FMCA Freethinkers chapter but was also eager to get deeper into the manual for the new Sony a99v camera.  I installed the PDF manual onto my laptop yesterday from the CD-ROM that came with the camera and then e-mailed it go my iPad2 so I could read it conveniently. 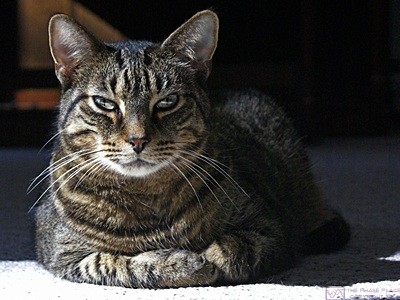 Jasper, our mackerel tabby male cat, allows himself to be photographed on the living room floor. You wouldn’t know it from this photo, but he is actually a very sweet animal ad a real joy to have in our household.

Other than the time, date, and date format I have not adjusted any of the default settings or experimented with the camera’s many functions.  I have taken a few photos just to make sure it works but I do not want to start generating a lot of image files until I have made decisions about basic things like folder naming conventions and “normal” shooting modes and settings.  I did, however, enable a “rule of thirds” grid on the viewfinder screen.

Linda worked on our personal accounting and then prepared the treasurer’s report for our amateur radio club meeting this evening.  I took a break from reading the camera manual to research the availability of some accessories on the B&H Photo website.

The electric cable release for my old Minolta 9000 SLR film cameras works with the a100 so it may work with the a99v too.  If not, newer remotes are available, including wireless ones that are not too expensive.  I found the angle finder but it is discontinued.  With the adjustable LCD screen in the back of the camera the angle finder isn’t really necessary but would have been a nice accessory just the same.  I am also looking for a case and/or a photographer’s vest and/or a chest harness/holder.  The a99v with the vertical grip and a telephoto lens is a substantial piece of equipment, both in size and weight, and the chest harness/holder would support that weight more comfortably and securely than a neck strap.  I found several interesting things but not exactly what I had in mind.

By the time Linda finished her accounting tasks I was dressed to work.  First up was the hydronic heating system in our bus.  I got four pieces of 2×4, each about four feet long, and two pieces of 2×12 about 16″ long.  I put a pair of 2x4s under each desk base and inserted one of the 2x12s between the 2x4s and the base.  That raised each base three inches which was enough to ensure that the heater hoses attached to the lower fitting on each heat exchanger sloped slightly downward back towards the main unit.

The hose that connects the two heat exchangers together in series is attached to the top fitting on each one.  Half way between the exchangers is a T with the bull branch pointing up.  A ball valve with a waste port is attached to the branch.  While Linda held the valve higher than anything else in the system I opened the valve and used a small funnel to slowly pour in antifreeze.  When the lines and exchangers appeared to be full I closed the valve, turned on the thermostat for that loop, and turned it up to cause the circulating pump to come on.  I let the pump run for a few minutes and then turned it off.  Again with Linda elevating the valve I opened it and added a little more antifreeze.  I ran the pump again for a few minutes and shut it off.  This time the coolant was still right at the valve so I shut it and Linda set it down.

It was now time for “the big test.”  In order to be able to see if there were any leaks, and catch any coolant if there were, we put heavy duty paper shop towels under all six of the clamped connections where the heater hose went over 3/4″ copper as well as under the soldered joints of the T and valve.  I opened the water bay on the passenger side, where the Aqua-Hot is installed, checked the coolant level in the expansion tank, and made sure the paper cup was positioned under the overflow tube.  The level of coolant in the expansion tank was just above Minimum Cold.  With everything in order I turned on the Aqua-Hot burner and then turned the front zone thermostat back on.  I also turned on the thermostats for the bathroom and bedroom zones to cause coolant to circulate through those loops.

There are quite a few gallons of antifreeze in the hydronic heating system and even on a mild day such as today (temperature just above 70 degrees F) it takes a while to heat it up to the 170 degrees required to shut off the diesel burner.  I kept checking the hoses by the fill valve and the expansion tank.  When the hoses were warm and the level of the coolant had risen 1/2″ in the expansion tank I cracked open the waste port on the fill valve.  I got a tiny, short hiss and then coolant came out so I quickly closed it.  It appeared that our method for filling the system and bleeding the air out had worked as intended, and there was no evidence of any leaks.

I removed the chain from the new Poulan Pro 18” chain saw since I completely dulled it trying to cut through a tree root.  As long as the cover, chain, and bar were off I cleaned up the motor unit as best I could.  Oil impregnated sawdust is tenacious stuff.  I put the new chain on the bar and attached them to the motor, making sure the chain was oriented correctly.  I topped up the bar and chain oil reservoir and topped off the fuel tank.

It took several trips to get the 7′ step ladder, pole saw, compound lopping shears, hand tree saw, and chain saw back to the apple tree.  I noticed yesterday that one of the main branches coming off the trunk about 3′ above the ground was dead.  The bark was missing and the smaller limbs were brittle.  The bark looked like it might have been chewed away by deer but I wasn’t sure.  All I knew is that it was dead.

I started with the pole saw and worked from the ladder to cut off the limbs that extended far up into the tree.  Once I had those detached and pulled out of the tree I started the chainsaw and used it to cut off the larger branches as I worked my way down towards the main trunk.  I gathered all of the smaller material into a pile and then gathered the larger pieces together.  I used the largest piece as a sawbuck to support the other pieces as I de-limbed them and cut them into four foot lengths.  I then cut up a large pine tree limb that has been sitting on the ground under the apple tree for quite a while.  I used the pole saw and loppers to trim off a few other small branches and the carried all of the tools back to the garage.  It was 3 PM by the time I got everything put away.  I was done with physical work for the day so I got a much needed shower and got dressed appropriately for our meeting later.

The apple tree is still in need of serious pruning if it us to survive and bear useful fruit.  It particular it needs to be “topped.”  It is too tall overall, especially in the center, and much of the fruit is growing up there where the sunlight is good but it cannot be reached either by us or by the deer.  We have been putting deadwood in the firepit all summer and, more recently, on the disposal pile, where it goes mostly depending on what part of the yard the tree was in when it fell or got cut down.  In the case of the apple tree it occurred to me that Applewood is prized for the smoke it produces when grilling so I may stack it up, let it continue to dry, and perhaps rent a chipper next year to turn it into something useful.

We had breakfast later than usual, and skipped lunch, so we ate dinner at 4:30 PM, which was earlier than usual.  Dinner was lentil loaf, baked potato, and steamed broccoli, a simple but healthy and tasty meal.

On Friday I exchanged a few text messages with Josh at Coach Supply Direct regarding our desktop and table.  The net result was that his schedule had changed and he was not going to be able to get our desktop and table from Countertops Plus in Shipshewana, Indiana and deliver them to us for over a week, at the earliest.  He had also planned to bring some extra clips for our MCD shades and look at the wiring on the front passenger seat 6-way power base.  Those last two items were not critical but we are ready to install the desk once we have the desktop and cannot afford to wait another week and a half to get it.  I called and left a message for Ferman Miller to let him know I would be driving down tomorrow morning to pick them up.  I then worked on this post until 5:30 PM when I stopped to reinstall the antenna, radio, and GPS in my car.

We left at 5:45 PM for our monthly SLAARC meeting and shortly thereafter heard Mike (W8XH) on the South Lyon 2m repeater.  I replied to his call and we had a QSO that lasted almost all the way to our meeting site, where we arrived within a minute of one another.

We socialized with fellow club members from 6:30 PM until Harvey (AC8NO) called the business meeting to order just after 7 PM.  The club secretary was absent so I took the minutes.  The business meeting lasted less than 10 minutes and was followed by a presentation on APRS by Eric (K8ERS).  I gave Mike (W8XH) a check for the Icom IC-2820H dual band radio that has been in my car since early summer.

As I said at the beginning, I really needed to update the FMCA Freethinkers roster and financial reports and make them available this evening.  Well, sometimes things don’t happen just because they need too.  Today was just too perfect a day to waste it sitting inside at a computer and by the time we got home from our meeting I did not feel like starting this task.  I will try to make this a priority tomorrow evening, but each day is an adventure and I have to be agile in dealing with the myriad tasks that lay before me, including ones that appear unexpectedly.