The predicted thunderstorms came overnight with heavy rain and lots of lightning and thunder.  I was aware of the rain but Linda seemed to be more aware of the lightning.  Based on the radar just before going to bed the strongest storms passed north of us.  Even with furnaces and air-conditioners we are more intimately connected to the weather in our RV than we are in our house, especially during storms, but we like that aspect of the lifestyle.  If we wanted to live in a climate controlled bunker we would build one at the house. 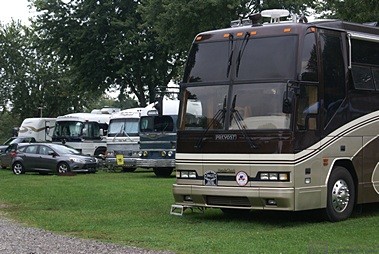 Our bus at the GLCC Surplus Salvage Rally at Elkhart Campground in Elkhart, IN. We bought it six years ago today. We are the 4th owners as best we can determine.  The older GM buses behind ours are also members of the FMCA Great Lakes Converted Coaches chapter.

We bought our bus six years ago today.  It is an H3-40 VIP motorcoach that was manufactured by Prevost Car Inc. in Quebec, Canada in August 1990.  It is powered by a Detroit Diesel 8V92TA diesel engine manufactured in April 1990.  It went directly to Royale Coach in Elkhart, Indiana in September 1990 and the conversion was finished in October 1991.  Because of the timing it was titled as a 1992.

In Michigan vehicles have to be at least 25 years old to qualify as “historic” so we are still a couple of years away from that benchmark, but she is a grand ole gal none-the-less.  Technically historic license plates, which carry an inexpensive registration fee, are only supposed to be used on vehicles that receive limited use, such as in car shows and parades, but people routinely put them on everyday use vehicles to avoid paying higher registration fees.  We, however, do not intend to do that.  It’s the kind of thing that some bureaucrat in the future can decide to do something about and end up imposing retroactive penalties.  It’s just not worth the risk of having to deal with that hassle.

We spent an hour after breakfast figuring out the required dimensions for the Corian table that will go between the two captain’s chairs in the living room of the bus.  I then called Countertops Plus and left a message for Ferman Miller with the dimensions.  It turned out that the table needs to be 22″ wide and 38″ long and I doubt that he has enough material in his 96″ by 30″ sheet to make both the desktop and the table.  I will follow up with him on Monday if I do not hear back from him before then.

We left late in the morning to visit two of the surplus and salvage businesses on US-12 in Michigan.  Johnson’s is just west of White Pigeon and Bontrager’s is east of White Pigeon but not as far as Sturgis.  I found two switch plates at Johnson’s that might fit two small 12V DC switches I need to mount.  At Bontrager’s I found a 1-1/2″ Bristol blade valve to replace the one on our fresh water tank.  We also bought four packages of small 12V DC LED rope lights.  Each pack is 5 meters (16′) long and has 60 warm white LEDs per meter.  They are rated at 4.8 Watts per meter and are very bright.  My intention is to use them around the inside of cabinet openings in place of the incandescent light fixtures that are original to the coach.  The will give a brighter light and illuminate the entire inside of the cabinet rather than shining light from a single location.

We looked at a powered fresh water hose reel with a 40′ hose and a powered 50A shoreline reel with a 33′ cord.  They wanted $200 for the water reel and $400 for the cord reel.  Linda looked them up online using her phone.  The asking prices were certainly less than retail at Camping World, but not enough less to make me shell out that kind of money for something that might not get installed for a year or more, if I could figure out a way to install them at all.

We stopped at Martin’s on the way back to camp and bought two Amy’s frozen vegan lasagna entries for dinner.  The other rally participants were having regular lasagna and we wanted to fit in.  🙂  Salad was also being served and Vickie was making it without cheese, eggs, etc. so we could have some.

Pat and Vickie had a Nutone Food Center years ago and still had some of the accessories plus a replacement motor.  They brought all of it over to see if it would fit our unit.  It did, but was missing one piece, a right angle drive that was needed for some of the accessories.  Vickie was pretty sure they had it somewhere at home but would have to look for it after the rally.  They also did not have the food processor, which is the accessory that interests Linda the most, but it was nice to get what they had.  Linda can start checking EBay now that we know the other accessories fit our recessed power base.

I helped Pat with the wiring for an LED replacement bulb for a fluorescent light fixture.  They have 12 of these fixtures (with 24 tubes) in their 1987 Prevost XL conversion.  Pat found LED replacements that can be wired directly to the switched 12V DC supply, completely eliminating the use of the electronic ballasts.  It turned out that the pins at each end of the tubes were also electrically active and we had to cut all of the interconnecting wires.

Ed Roelle stopped by to find out what we were doing with all of the food equipment.  Apparently someone thought we were “giving it all away.”  Not true, of course; it belongs to the club and isn’t ours to give.  What we wanted was for different people to take the things that will be the most useful at the rallies they host.  Linda and I do not make it to all of the rallies, and next summer we will miss two of the big ones; Back-to-the-Bricks in August and Surplus & Salvage in September.  We plan to attend the Escapees Escapade Rally at the end of July in Essex Junction, Vermont, and then the FMCA rally in early August in Massachusetts.  We will then head for the Canadian Maritimes and work our way back down through New England over the course of the early fall.

Pat Caverly stopped by to see the bus.  Linda showed her around and then we all sat down to visit for a while.  After they left to help with dinner preparations I finished the posts for yesterday and the day before, e-mailed them to myself, and started working on today’s post.

Dinner was scheduled for 6 PM and most folks were gathered by then.  Rain looked imminent so I closed the three roof vents in our bus, gathered up the bag of chapter T-shirts and flags, and went to the meeting room.  I conferred with Pat, Vickie, Tami, and Linda and decided to hold the brief business meeting before dinner.  It took all of 10 minutes.  Dinner was salad and lasagna.  Vickie prepared the salad by keeping all of the ingredients separate.  That allowed us to build our salads using only things we eat, which we really appreciated.  Linda heated the frozen Amy’s vegan lasagnas that we bought at Martin’s for our main course.

Linda was helping clean up in the kitchen and I was sitting at a large round table swapping bus stories when Michele Henry of Phoenix Paint came in.  She was on her way home, which is not far from the campground, and knew from talking to Josh (at Coach Supply Direct) that we were here for a rally.  She stopped in to see if she could find our coach, which of course she could even in the dark, since she is the one who painted it.  Linda and I excused ourselves and went back to the coach with Michele, retrieving her kids from her car.  We showed her the interior remodeling and had a long chat.

While we were talking Juniper caught a small house mouse.  We knew there was one around because she had been focused on the bathroom most of the day exhibiting stalking behavior.  Something got my attention and when I went back to the bedroom it was immediately obvious, even in the dark, that she had a mouse on the bed and was “playing” with it.  I got a paper cup and went to the bedroom to try and catch it.  It was very small, clearly a very young mouse.  I made Juniper release it and it hunkered down on the floor by the HVAC duct.  When I put the cup down it started to go the other way but Juniper was there and it turned around and ran into the cup.  Although the cup was not big it was big enough, and slick enough, that the mouse could not climb out.  I put a paper bowl over the cup to make sure it did not escape and we continued to chat.

It started raining while Michele, Raven (her daughter), and River (her son) were visiting.  At one point the rain was very heavy and the lightning was intense and frequent so they stayed long enough for the storm to pass.  It was getting late and we were all a bit tired so they prepared to leave.  I took the bowl off of the cup and placed a plastic zip lock bag over the cup and zipped it shut.  Raven carried the cup and Michele said they would release the mouse about a mile down the road near an area of fields.

Linda turned the front TV on and we watched an episode of Gotham, which we will not have to watch again, and American Masters (on PBS).  The American Masters episode was on the photographer Pedro Guerrero.  Although known as perhaps the best photographer of Frank Lloyd Wright’s architecture, he had a far-reaching and distinguished career.  As always, it was a well done program on a fascinating individual who made important cultural contributions.  Linda was dozing at the end, went to bed, and fell asleep.  I tried to write for a while, gave up, and went to sleep.