We had our usual, but never boring, homemade granola with fresh blueberries for breakfast.  I brewed a pot of the Costa Rican half-caff coffee we bought yesterday without tasting it first.  We found it to be somewhat bitter, which is not our taste in coffee, so we probably will not buy more after this batch is gone.

Many of the drawers in the bus have the pulls attached to the walnut face and then the face attached to the front of the drawer box.  Thus, the only way to remove the pulls is to first unscrew the box from the face.  I took the face off of one drawer and installed the new pull.  It fit perfectly, confirming that the mounting hole spacing is 3″ center-to-center.   The one from THD comes with 1″ and 1.5″ #8-32 machine screws but it looks like we will need something shorter than 1″ for the framed drawers and shorter than 1.5″ for the solid drawers.  The cabinet doors have 3/4″ thick frames so the 1″ machine screws may work for those.  Thus we should be able to use some of the machine screws that come with the pulls from THD but will have to buy some as well.  The pulls from CSH do not come with screws so we would have to buy those anyway.

Linda left around noon to meet Diane in Livonia to see a movie (Ricki and the Flash) starring Meryl Streep, Kevin Kline, and Rick Springfield.  I went on an errand run while she was away.  At The Home Depot in Howell I found 10 packs of the drawer pull we like so the price came out to under $2 per pull compared to $2.48 when purchased individually.  We need 58 to replace all the ones in the coach plus at least four for the new desk drawers so I bought six 10-packs.  We have not decided if we will replace the single screw round pulls on the two TV cabinet doors with the double screw pulls.  If we do we will need a couple more pulls.  If not, we will need two round pulls in the same style and finish, which THD also carries.  I bought small packs of #8-32×3/4″ and #8-32×1-1/4″ lengths so I can figure out what lengths work best in each location.

Jarel called while at was THD.  The plans for the built-in sofa had arrived in today’s mail and he had a few questions.  We talked through the issues and came to the conclusion that it would be better for us to come down on Wednesday instead of Tuesday to pick up the desk.  That will give him time to cut the sofa pieces and do some minor assembly and finishing.  The plywood seat and side pieces need to be stained to resemble the walnut hardwood and a 3/4″x3/4″ piece of walnut hardwood needs to be attached to the front edge.  He also needs to cut the piece of walnut veneered plywood for the front and then spray everything with the same lacquer he has used on all of the walnut desk pieces.

As I was finishing up at THD I also got a call from Chuck letting me know that everything was on track for the refrigerator swap tomorrow.  My next stop was at the Howell Lowe’s for a 4′ x 4′ sheet of 3/4″ plywood but I did not like their selection any better than THD.  I ended up buying two quarter sheets (24″ x 48″) of birch plywood.  This plywood has a lot of thin layers, so it is very flat and dimensionally stable, with defect free surfaces that are sanded smooth and very clean edges.  These sheets will go on the bottom of the refrigerator alcove in the bus to elevate the new refrigerator above the new vinyl tile floor.

Back home I texted Josh at Coach Supply Direct, called Terry at A-1 Upholstery, and called Butch regarding the change in our visit date for next week.  Linda got home shortly thereafter and helped me reattach the edge trim to the two doors of the old refrigerator and load them into the back of my car.  We covered everything with blankets and then loaded all of the drawers, shelves, racks, and bins.  Once the old fridge is out of the bus we will clean it, reassemble it, plug it in, and make sure it is cooling.  We will then call DTE Energy to arrange pick up through their recycling program. 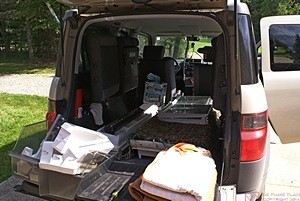 Loading pieces of the old refrigerator into the back of the Element to take to Chuck’s shop.

Linda bought an Amy’s Roasted Vegetable Pizza while she was out and cooked it for dinner.  It is our favorite store bought pizza, and much better (for us) than what we can usually get at restaurants and pizzerias (with the exception of Satchel’s in Gainesville, Florida), but not as good as the pizza we had while Mara was here.  That pizza was memorable.

After dinner I got a shower and then worked on the design/drawings for the seat and back cushions for the built-in sofa for the bus.  I started editing blog posts for July but did feel like uploading them.  We went to bed earlier than usual as we had to up at 7 AM tomorrow to go to our weekly ham radio club breakfast.