I got up at 8 AM.  I must have been sleeping soundly as I was unaware until then that had already gotten up.  She had gone for a walk and left me a note.  The high temperature today is forecast to hit 90 degrees F and she wanted to get her walk in early.  I fed the cats and checked the mouse trap in the pantry.  We caught another one overnight so I carried the trap back to the northeast corner of the yard and released it.

I made our morning coffee and had just settled in to work on my iPad while it brewed when Linda returned from her walk at 8:35 AM.  We enjoyed our first cup of coffee and then had breakfast.  She made a batch of her fabulous granola yesterday but we have to finish the previous batch first.

Today was the day to get back to work on the bus.  First I spray lubed the two overhead garage doors, both rollers and section hinges, and ran them up and down and back up.  I needed to open them anyway to get out the ladder and tools and sometimes it’s better to spend an extra minute while you are thinking about something and just take care of it.  Besides, I had no way of knowing if I would accomplish anything else today so at least the doors worked more smoothly. 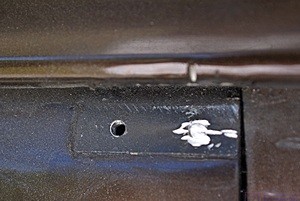 This is where the “stop block” was located. The left screw came out but the right one did not. I had to grind it off.

In a very real sense our entire bus remodeling project hinges on getting the old refrigerator out and the new refrigerator in.  The refrigerator swap, in turn, hinges on being able to open the fixed window panel on the passenger side of the bus.  That panel is hinged at the top by a pair of rolled channels, one on the top back edge of the window frame and the other on the lower back side of a rail that runs almost the entire length of the bus.  Most of the upper body side panels are hung from these rails and secured at the bottom with latches or other fixed hardware.

The window frame in question has two latches that can be released allowing the frame to swing open and provide an emergency exit, except for the two “stop blocks” in the upper outside corners which are attached to the frame (with two screws) just below the rail.  As the name suggests, these blocks appear to stop the frame from opening more than about 10 inches. That would make emergency escape difficult but it makes it impossible to remove a refrigerator.  We know these frames will open farther as someone posted a photo of an H3 on one of the Prevost bus websites with this same frame open almost 90 degrees (horizontal).

As I have described here before I successfully removed the left block and the left screw from the right block a couple of weeks ago but have been unable to remove the right screw from the right block.  Early in my attempt to remove it I stripped the Philips head and things just got worse from there.  I borrowed an impact screwdriver from Chuck, which successfully extracted the left screw but the right screw would not budge.  I eventually bought and used three different screw extractor sets and broke two drill bits using one of them. 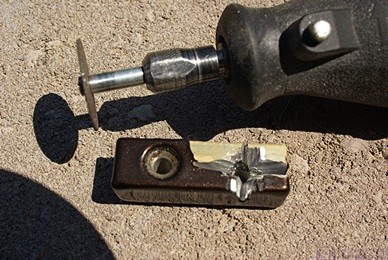 The Dremel with a cutoff wheel installed. The stop block was unusable by the time I got it of.

I borrowed a soldering gun and Dremel Kit from Chuck on Saturday and finally got around to using them today.  The idea of the soldering gun was to heat the screw causing it to expand and then contract when it cooled.  This will sometimes cause screw threads to separate from tapped holes.  In this case the block was already turning relative to the shaft of the screw but the screw was not turning so I hoped the heat might free it from the threaded hole in the frame.  To find out, however, I needed to create a slot in the shaft that would accept a flat blade screwdriver, in particular the large bit that is part of Chuck’s impact screwdriver kit.  Enter the Dremel.

In order to create a wide enough slot I put two cutoff wheels on the arbor.  The block is at the top of the window frame so standing at the highest safe step of our 8-foot step ladder I was at a comfortable height for holding the Dremel vertically and cutting a horizontal slot.  The cutoff wheels are about the size of a quarter so the slot extended well beyond the screw head, or what was left of it, into the block.  Using the Dremel was a last resort and I knew that once I made that decision the block was going to get destroyed.

The Dremel cutoff wheels cut through the block, which is aluminum, very easily and did not have any trouble with screw or the broken drill bits.  The drill bits eventually loosened to where I was able to extract them with pliers.  I tried several different screwdrivers in my newly created slot but to no avail.  I sprayed WD-40 around the block and screw using paper towels to catch the overspray and clean up any runs.  I kept cutting the block until I was able to pry it off of what remained of the screw.  With less than a quarter inch of the shaft left I cut a slot in the end and tried to unscrew it but the tangs just broke off.  I tried unscrewing it with pliers but it would not budge.  The protruding stub would interfere with opening the frame 90 degrees so I used the Dremel with a cutoff wheel to grind the shaft down flush with the frame. 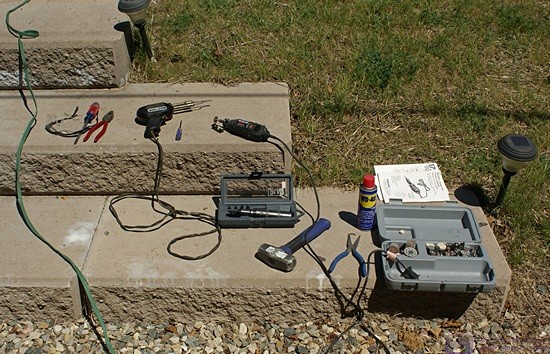 Some of the “stuff” I used to attack 25 cents worth of aluminum because of corrosion.

Linda came out to help at this point.  I repositioned the ladder and then we unlatched the frame on the inside.  Linda pushed it out while I supported it from outside.  It opened farther than it had before but we did not try to raise it to a horizontal position.  The frame/glass is very heavy and we did not want to risk having it come loose at the hinge. We closed the frame and latched it.  I took a few pictures and then put all of the tools away.  The weather was very warm and humid and that was enough outside work for today.

We had hummus, pita chips, and black grapes for lunch.  After lunch I spent a few minutes in my office checking e-mail and then typed up the minutes from our July SLAARC meeting.  I then started working on the design/drawings for the built-in sofa.

I have a very long list of things to do but the furniture design remains a priority as I need to make sure Jarel has all the information he needs to keep moving forward on the custom cabinetry.  Although I will be assembling the sofa Jarel will be cutting all of the pieces.  I will be using a long rip of a full sheet of plywood and a long piece of 3/4 x 3/4 walnut hardwood as an edge band for the horizontal platform.  In order to give Jarel a cut sheet I needed to design the unit.  I also needed to design it so I knew it would fit when assembled.

I took an occasional break to chat with friends on the two local ham radio repeaters that we tend to use but otherwise stayed on task until late afternoon.  I had pulled a book on cryptology from our personal library and started reading it.  I took a nap before dinner and continued reading afterwards.  Fascinating stuff, cryptology.