We had yet more rain overnight.  I heard the rain around 6 AM and checked the Wundermap app on my iPad but did not get up.  Linda did not need to go to the Howell Farmers Market today as the refrigerator is quite full and the rainy weather made the prospect less appealing.  We finally got up at 9 AM and I made coffee.  Linda checked the weather forecast.  It called for a 100% chance of rain between noon and 3 PM with thunderstorms and up to 2″ of rain.  By 10:15 AM it was raining steadily again.

We deferred by one more day getting back to work on the bus.  The monthly meeting of our South Lyon Area Amateur Radio Club (SLAARC) was this evening and we did not want to get involved in physical work today.  I wanted to do a load of laundry but deferred that as the high humidity makes it harder to get the clothes dry.

I opened the three boxes that made up the OTA TV antenna shipment from AntennasDirect.com and laid all the parts out on the floor.  As I wrote yesterday I need to determine exactly what types/lengths/connectors I need to get everything hooked up and make sure I have it on hand before I climb the 40 foot tower next to the house.  After I laid all of the parts out this morning Linda asked how I was going to get all of that stuff up the tower. 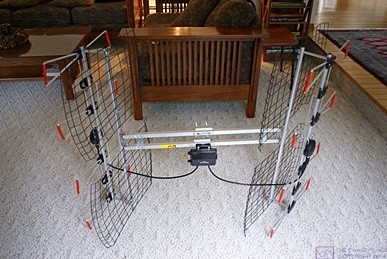 My plan is to preassemble as much stuff as possible.  I will then take a 100 foot rope with me when I climb the tower, loop it over one of the crossbars, and drop it back down to the ground where Linda can tie it to a bracket, or directly to some part, and pull it up to me.  As I describe this it occurs to me that I should probably rig up a pulley.  We also figured out that we should run the TV co-ax inside the house before I climb the tower.  That will allow Linda to scan for signals and talk to me on our portable ham radios while I am on the tower if the antennas need to be aimed.  I called Mike (W8XH) to see if he would bring his climbing harness to our ham radio club meeting this evening and he agreed.

For breakfast I had some of the Pepperidge Farm cinnamon chocolate chip bread Linda bought and we both had fresh grapefruit.  After breakfast I got cleaned up and dressed and then partially assembled the OTA TV antenna.  I then went to my office and settled in at my desk to upload blog posts.  I had not been in my e-mail for a few days so there were some things I had to respond to before working on our blog.

I got my blog posts uploaded for May 29 through June 7 and then decided to update the other three WordPress websites I work on.  Much to my dismay I was not able to log in to the FMCA Freethinkers website.  I got an error message instead and the contents looked to me like the site might have been hacked.  I notified the President of the chapter and indicated that I would contact the ISP technical support folks and see what they can tell me.  I have never opened that site up to the members of the chapter because I never quite finished it but I intended to and I have a lot of time and effort invested in its development.  Still, if the site is totally corrupted I may just delete it and abandon the whole project.

I wrapped up my work just in time for dinner.  Linda reheated the two leftover vegan cheeseburgers and served them with the remaining vegan potato salad and fresh nectarines.

Linda spent a little time during the afternoon getting the treasurer’s report ready for our SLAARC meeting.  We left at 6 PM and were at the Witch’s Hat Depot in South Lyon by 6:30 PM.  We have changed the meeting format to have social time from 6:30 to 7:00 PM, followed by a business meeting, and then a program.  I got the climbing harness from Mike (W8XH) as soon as we arrived and put it in the car.  I then had a brief chat with Scotty (AC8IL) regarding Universal Towers in Clinton Township, Michigan and LMR-400 co-ax.  Scotty stocks LMR-400 but also stocks RG-213 which he thinks is better for outdoor use.  His opinion is based on a Motorola white paper that discusses potential problems with the aluminum foil wrapped copper braid outer conductor in LMR-400 in the presence of moisture.

Tonight’s business meeting was a discussion about preparations for the upcoming ARRL Field Day lead by this year’s club field day chair Paul (KD8SNZ).  The program was a presentation by Larry (K8UT) on the N1MM Logger+ contest logging program that we will be using to log contacts on four different networked computers.  Larry is a member of the N1MM development team.  I asked Larry if I could send him the URL for my broken WordPress website and he said he would look at it.  We left at 8:45 PM.

When we got home Juniper was hunched over something in the living room and I could see immediately that she had caught another mouse.  It was very small, like the last one, and for all I know it was the same mouse.  I got her to drop the last one and it escaped into my office.  Linda grabbed one of the antenna boxes and pulled out the shipping paper that was stuffed inside.  I managed to get Juniper to drop the mouse in the box, from which it was not going to be able to escape, and then took the box outside and set it free.  If it has any sense it won’t come back in the house and it will tell all if its little mouse friends to steer clear of this place.  Juniper is a very skilled hunter and will catch anything in that house that moves that is smaller than she is.

Linda prepared some fresh strawberries and served them with some non-dairy ice cream.  She logged in to Amazon.com and ordered six live traps and a new cover for my iPad, both eligible for Amazon Prime.  We then spent a little more time reading and writing and checking the weather.  The 10-day forecast is for continued rain almost every day.  We are still expecting the new roof shingles to be delivered tomorrow but we won’t be surprised if they are not.  We are also expecting that Apex will have to push the start date of our project back due to all of the recent rain delaying other jobs that are ahead of ours.  We turned in for the night at 10:30 PM; late for Linda and early for me.  She was asleep fairly quickly but I stayed up writing and played a few games on my iPad as I do most nights.