I spent most of the day and evening processing photos, although I took time to dump the holding tanks and fill the fresh water tank.  Linda and Val did Laundry and then went grocery shopping after which Linda started preparing the inside of our coach for travel.  It was a long, busy, productive day but it was mostly chores and work, so not much to write about.  We did, however, sign up to be staff at the July 2016 Escapade in Essex Junction, Vermont.  I signed up to be the assistant staff photographer again while Linda signed up for any job that was in a quiet environment so she can hear.  We really do enjoy the Escapade rallies.

Sunset as viewed from our campsite at the Pima County Fairgrounds near Tucson, AZ.

Today was our scheduled departure date but we did not need to vacate the Pima County Fairgrounds until noon.  We would be caravanning a relatively short distance with Lou and Val and targeted 11 AM for our departure.

The more time we spend in our bus the less anxious we are the night before we are going to move to a new location, but there is still a certain anticipation about it.  Moving the bus is not like getting in a car to go to work.  It’s a big, complicated, machine and there are many details to attend to before we can move it.  It also rarely travels the same route twice so we spend time researching and planning travel routes.  Fortunately, we enjoy these aspects of the RV lifestyle and had most everything in order by the time we went to bed last night.  We both slept well enough having worked and played fairly hard all week.

We had a leisurely morning and took care of the final preparations for travel.  As it was getting to be 10 AM we had to ask someone to move a car so we could pull out.  Paul Evert’s RV dealership had moved some of the rigs they had sold during the rally to the full hookup area where we were camped all week and had folks pull there trade-in units there so they could transfer their belongings.  As a result the area was getting crowded and obstructed with cars parked wherever it was convenient (for the owner).  The RV Driving School was also busy in one of the parking lots near us teaching people how to turn, back up, and park, including teaching the “spotter” (co-pilot/navigator) how to give hand signals to the driver.  (This is actually the more difficult job requiring judgement, proper positioning, and clear/timely signals.)  As long as the driver can see the spotter all they have to do is follow directions.  Many of the Escapade staff were still at the fairgrounds and attendees who signed up for HOPs (Head Out Programs) were still camped there as well.  The HOPs are organized outings that sometimes involve a tour bus for transportation, a tour leader/guide, admission to one or more venues, and possibly food.

We pulled out roughly on time with Lou and Val right behind us.  We headed out of the fairgrounds and then north on Houghton Road to I-10 where we headed west.  They needed fuel so we took an exit on the west side of Tucson where there was supposed to be a truck stop, but it wasn’t there.  Lou pulled into a station where we could not get in/out so we found a spot a little farther down the road where we could turn around and waited for them to pull out of the station.

We followed them back on to the highway and then retook the lead.  We exited at Eloy where there were both Pilot and Flying J truck stops.  We topped up our diesel tank while Lou filled their propane tank.  We got back on I-10 for another eight miles and then exited at Sunland Gin Road and headed south into Arizona City.  A few miles, and a bunch more minutes, later we pulled into the rental property that currently serves as Curtis Coleman’s residence and headquarters for the RVillage social network.  Good things are happening for RVillage and it was good to be back here to spend a little more time with Curtis and his adorable dog Augie, a Bevar (sp? may be Biewer) Yorkshire Terrier.

A panoramic view looking west from the deck of RVillage World Headquarters. It was very peaceful here.

We got settled in and then visited a bit.  We eventually went to Duffer’s Restaurant at the golf course and then went back to the house for movie night.  The film for this evening was “The Social Network” about the founding of Facebook; a most appropriate choice given where we are boondocked.

Someone at the Escapade told Lou about a road that runs between Florence and Kelvin Arizona.  They said it was mostly good gravel and very scenic and Lou was determined that we find it, drive it, and photograph it.  Linda and Val packed a picnic lunch while Lou and I prepared our photography gear.  I grabbed the Garmin GPS out of our car (just in case) and we took off, leaving Curtis some peace and quiet to attend to RVillage.

I managed to navigate us to Florence where we decided it would be prudent for Lou to top off the fuel tank in his truck.  We pulled into a Circle K (Kangaroo?) and took care of that.  When Lou tried to start the truck the starter would not engage.  It would turn but made a really bad grinding sound.  Sometimes the throw-out gear binds and we tried tapping on the starter with a long stick and hammer but it did not help.  The starter had just been replaced a month ago in Mesa, Arizona and had a 60 day towing policy in addition to the parts and labor warranty. 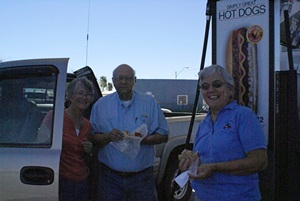 Val, Lou, and Linda having lunch by the fuel pump island at the Circle K in Florence, AZ.

Lou called the repair shop and they dispatched a tow truck.  I then called Curtis to see if he could fetch Val, Linda, and me from the Circle K and he graciously agreed to come get us.  We let the station attendants know what was going on and they were cool with the whole thing even though we were blocking one of the pumps.  It took a while for the tow truck to arrive so we ate our lunch standing in the shade at the end of the fuel island.  We must have made an interesting sight to passersby.  The tow truck eventually arrived, pulled the pickup truck up onto the flatbed, and drove off with Lou riding shotgun.  A little while later Curtis arrived.  We loaded our picnic supplies and camera gear into the back of his SUV and he drove us back to his place. 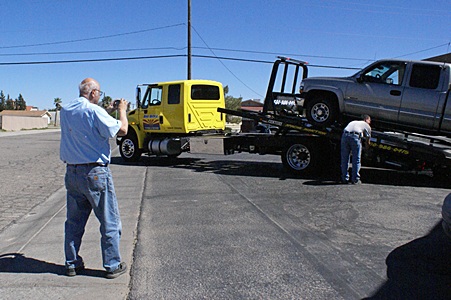 Lou photographs their pickup truck being loaded onto the flatbed hauler at the Circle K in Florence, AZ.

I expected to get a call from Lou letting me know that I needed to drive to Mesa to pick him up.  What we got instead was a call that the truck was repaired and he was on his way back.  The problem was that the starter mounting bolts had not been torqued tight enough and had backed out about 1/4 inch.  As a result the throw-out gear was pushing the starter back rather than engaging with the gear teeth on the flywheel.  As we thought about it we were realized we were very lucky this did not happen on the road from Florence to Kelvin.

Bonnie was also staying at the RVillage compound and joined us for dinner last night.  This evening we did a pot luck thing and dined at the outside table by the lake.