Today was the opening day for the 54th Escapade, the 6th time the Escapade has been held at the Elkhart County 4-H Fairgrounds.  This is our third Escapade.  Our first was in 2010 at this same fairgrounds and our second was last summer at the CAM-PLEX in Gillette, Wyoming.  The opening ceremonies were held at 3:00 PM, but there were things going on starting early in the day. 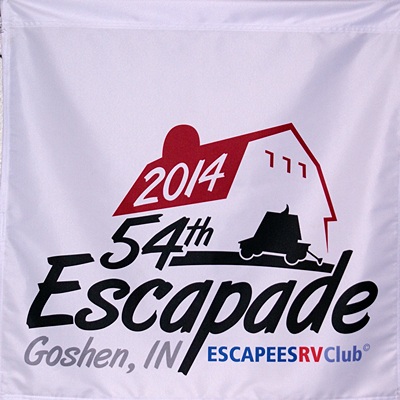 The 54th Escapade banner displayed in the hospitality area.

Parking for arriving rigs resumed at 8:00 AM and the registration and vendor areas opened at 9:00 AM.  The vendor area also included “The Row” where the SKP Chapters and C-BOFs have tables with information about their groups.  A group of musicians who like to jam gathered at 1:00 PM to do their thing.  The speakers and seminar hosts also gathered at 1:00 PM for an orientation meeting.  First time attendees gathered at 2:00 PM for the first-timers orientation.  On our walk over we ran into Chris Dunphy and Cherie Ve Ard, of Technomadia / Two Steps Beyond, who were headed to the 1st-timers orientation.  We knew they arrived yesterday because they checked-in to the Escapade on RVillage, but we had not yet located their converted bus.  It turned out that they were parked fairly close to us on the other side of the fence surrounding the infield, but obscured from our view by low trees.

Most of the attendees gathered at 3:00 PM for the opening ceremonies, which started with a video on Escapees RV Club founders Joe and Kay Peterson followed by two “blast off” door prize drawings for $500 cash each.  The local American Legion chapter provided a color guard, after which we were all welcomed and received a lot of information about the upcoming week.  The opening ceremonies concluded with the Chapter, C-BOF, and SKP CO-OP parade of banners.  We photographed as much of this activity as we could.

Immediately following the opening ceremonies the attendees went to the ice cream social in the Heritage Park green space just outside the assembly hall to enjoy a free ice cream bar, courtesy of FCIS Insurance.  We photographed the crowd enjoying their ice cream and then headed over to the other end of the building where Paul Everts RV Country was hosting their 4:00 PM happy hour.  Free wine and beer (on tap), and chili covered corn chips, make for a fairly happy hour.  We each had a small glass of wine and a few chips, sans chili.

We went back to our coach and off-loaded photos to our computers and transferred them to our flash drives.  Butch came over and we connected his radiator pressure tester to our Aqua-Hot, which appears to have a leak, and pressurized the system to 17 PSI.  We had to get our photos over to Lou before the evening activities, so we left the pressure tester hooked up to be checked later.  We skipped dinner because the heat and humidity had subdued our appetites and dropped our flash drives off en route to the evening door prize drawing and entertainment.  We got there early to see the slide show Lou had put together from photos that he, Sue, Linda, and I had taken on Saturday and Sunday.

We stopped at Lou and Val’s 5th wheel so Lou could capture my photos from my Compact Flash card.  Our photographic work done for the day we headed back to our rig and had a light dinner, watched a little TV, checked the weather, and turned in for the night.