Linda received Mother’s Day wishes this morning from our daughter and son.  Modern communications technology has certainly changed the RV experience, making it possible to stay in contact with family and friends, and even work or conduct business from the road.  The Elkhart County 4-H Fairground has WiFi and the WiFi Ranger Company is sponsoring WiFi connectivity and the WiFi Cafe during Escapade.  Our friends were having difficulty staying connected from inside their metal hulled bus, but we found and locked onto a strong signal using our WiFi Ranger Mobile Ti and shared it with them.

Today was still early arrival–the Escapade doesn’t officially start until tomorrow–but many rigs were already here and more arrived during the day.  For a rally that had not yet started there was a lot of activity.  Escapees runs a very popular “RVers Boot Camp” as a pre-rally before every Escapade.  They also have their SmartWeigh program set up to weigh vehicles.  The Geeks On Tour (Jim and Chris Guld) were also running pre-rally workshops on technologies for travelers, including Windows 8, cell phones, Picasa, and blogging.  Yesterday and today were big setup days for the vendors and Escapade volunteers were busy setting up the registration area, seminar rooms, and other venues.

I got a call from Lou Petkus (K9LU) regarding photography during the Escapade.  Linda and I had previously volunteered to be part of an official SKP Photographers BOF Escapade photography team.  He picked us up in a golf cart around 9:00 AM and we drove back to Building A to meet up with Sue Spahn, the forth member of our team.  Since the advent of digital photography, Escapade has featured a slide show of the previous day’s events just ahead of the evening announcements, door prizes, and entertainment.  Kathy Carr, Escapees RV Club president, and her daughter-in-law, Angie Carr, have handled this in the past, but asked the SKP Photographers BOF if they would take responsibility for it this year.  It was fortuitous that the BOF agreed to do this as Kathy and Bud had to return to Texas for medical reasons.  Kay Peterson, SKP founder and SKP #1, returned to Texas with them. 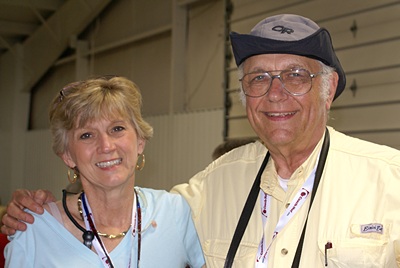 The photography team met for about an hour, looked at the schedule of events for the week, and discussed the kind of photos we were after and the logistics of covering all of the activities and still having some time to participate.  Head and shoulders shots of smiling people were at the top of the list, of course.  We each got a flash drive to use for transferring our photos each day to Lou whose job it would be to assemble the daily slide show.

Registration opened at 10:00 AM so we took care of that and picked up our 54th Escapade polo shirts we had pre-ordered.  I got a few photos of the Registration area/process, coffee/donut area, and Escapade banners in the WiFi Cafe.  Kelly Hogan, the president of WiFi Ranger, had his magnificent Class D motorhome and matching communications trailer parked just outside the building and we were able to chat with him briefly to thank him personally for figuring out how to get our WFR-MTi working with the Williston Crossings RV Resort WiFi system this past winter. 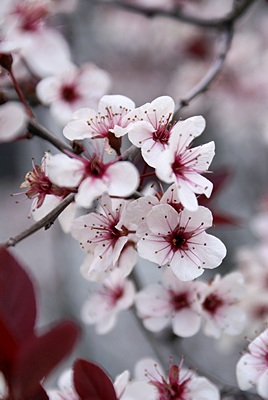 There were signs of spring at the fairgrounds.

Linda headed back to our coach to start working on a project with Butch and Fonda while I stopped at the AG building to take a few photos of the Geeks On Tour in action.  I also stopped by the RVers boot camp for some photos and then climbed the grandstand to take a panorama of the fairgrounds.  Back at our rig I shot another panorama of our row and then settled in to work on Butch and Fonda’s project until we had to meet with Lou again at 3:30 PM.  We found Lou and Val’s rig and then drove over to Sue’s rig in Lou’s golf cart.  While we were there Lou got Wayne to take a picture of the photography team.

We decided to go to dinner with Lou and Val and headed back down US-33 looking for Culver’s.  Linda and I were able to get nice salads there and split some French fries.  Lou started to drive us back to our site but we kept stopping for photo ops.  One of those opportunities was the Vendor pizza party/social.  We got our photos and visited briefly with folks we knew like Chris Guld of Geeks On Tour, Nick/Terry Russell of The Gypsy Journal, and Charles/Chris Yust of C &’C Marketing (our RV insurance agents).  Escapade directors Bob and Molly Pinner were there along with some other vendors that we recognized.  Molly invited us to stay, which we appreciated, but we are not RV vendors and this was their social. 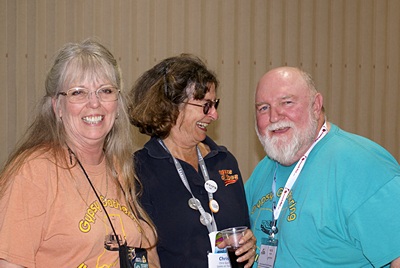 The RV vendors are their own little community (sub-culture) within the larger community/sub-culture of RVing.  Many (most?) of them are full-time RVers who make their living traveling the RV rally and show circuits selling their goods and services.  As such they share experiences and perspectives that are different from those of us who just attend rallies and shows, especially those of us who are retired.  They are often at the same events and, even when they are competitors, frequently become good friends. 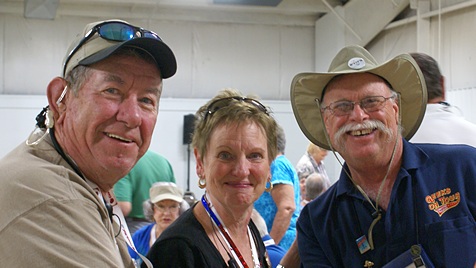 We finally got back to our coach where I downloaded photos from our Sony alpha 100 SLR camera to my laptop computer while Linda downloaded photos from her Samsung Galaxy S III smartphone to her laptop computer and then onto her SKP flash drive.  I used Microsoft Image Composite Editor (ICE) to process the two panoramas I had photographed and then transferred everything to my SKP supplied flash drive.  We walked over to Lou and Val’s 5th wheel and visited for a while as Lou downloaded the photos from the flash drives and took a quick look at them.

We decided to take the long way back to our coach by walking through some of the campground areas we had not yet visited.  Thick clouds had moved in and the skies to the west were getting ominously dark.  Several people stopped us to let us know that possibly severe storms were headed our way portending damaging hail and wind gusts of 70 MPH.  We shortened our walk and headed back to our rig where we found Butch outside talking on his cell phone.  We put up the two awnings we had down for sun shade and stowed our chairs and end table.  High wind and awnings don’t mix well.  Butch and I chatted until the mosquitoes got bad and then retreated to our respective buses for the evening.

It got into the low 80’s today and the humidity was up with the approaching weather, so the coach interior was in the upper 80’s.  We were watching the approaching storms on our weather apps and the weather/radar sub-channel out of Ft. Wayne, Indiana.  It was a fairly aggressive system but showed signs of dividing and going around us to the north and south.  The rain eventually started, forcing us to close our ceiling vents and narrow our window openings.  Serious lightning developed and the rain intensified to the point where we had to close the large entrance door window and reduce the awning window openings to about an inch.  With a forecast of continued rain overnight and a low of only 65 degrees F we knew it would not be the best night for sleeping.  Still, I love storms and enjoyed seeing/hearing nature’s power while I worked on blog posts for yesterday and today.