We had late morning dentist/hygiene appointments today so Linda did not get up early to go to the bakery and we slept in and got up at 8:30 AM.  We showered and dressed and finally had granola for breakfast at 9:15.  She made this batch of granola yesterday and it was very yummy.

Since the mice have recently been defeating our simple live traps I cleaned our more complicated one yesterday and set it up last night with a broken open peanut butter pretzel for bait.  When I checked the trap this morning it had two brown field mice inside.  They were anxious to get out and I was glad to oblige.  I set them free in the southwest part of our property on the other side of the road.  The last I saw of them they were headed south into dense cover and away from the house.

Our appointments were at 11 AM in Dearborn.  Linda left at 9:45 and I followed about five minutes later.  We took separate cars since she had to go to the bakery following her appointment.  Before I left I checked on the state of charge of the house batteries in the bus.  There were at 95% SOC.  I turned the charger off last night to let the battery bank drain down a little.  I turned off the Broan cube heater and the three toe-kick heaters and then shutoff the AC power coming into the coach.  I checked that the inverter was working, which it was, and left for my appointment.

We both had good checkups but Linda will need a crown in the spring.  A tooth with an old filling had weakened and needs to be capped.  The dental assistants/hygienists have started taking blood pressure readings as part of modern dentistry’s role in monitoring and promoting overall health.  I don’t know how accurate the wrist cuff machines are but my blood pressure was 121/59 and Linda’s was 128/67, which are excellent readings if they are even close to being correct.

On the way home I stopped at the new Menard’s on Wixom Road just north of I-96.  I was looking for 1/2×2″ fine thread carriage bolts but all they had were coarse thread in longer lengths.  As long as I was there I picked up a 6-pack of work socks and two more of the good live traps like the one we already have.

Back at the house I called Terry at A-1 Upholstery to confirm that our spacer cushion for the bus sofa was ready and that she would be there Friday morning.  Her response was affirmative on both counts.  I then called Josh to verify that he would be at his shop on Friday morning and he said he would.  I need to stop there on the way to A-1 Upholstery and return two swivel seat ring bearings. 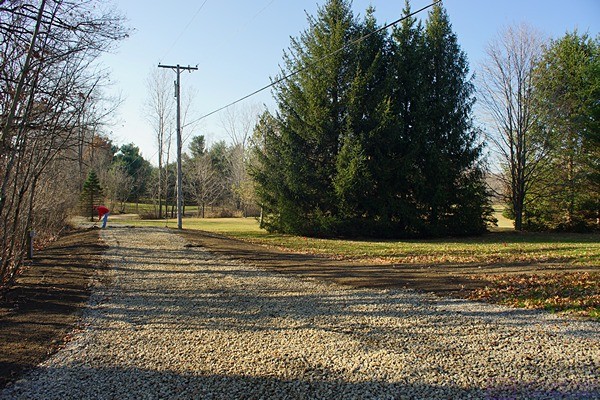 The new gravel driveway extension and RV parking pad. Phil, on the left side of the driveway by the nearer utility pole, rakes out the topsoil he placed along both sides of the driveway.

Philip Jarrell from Precision Grading was here working on the driveway extension when I got home.  After my phone calls I changed into my work clothes and went out to chat with him for a few minutes.  Phil had brought another load of screened topsoil and was using his track loader to place it along the sides of the driveway extension and at the west end of the property where the French drain begins.  He rough graded it with the track loader and then raked it out by hand and spread grass seed.  He will bring straw bales with him on a subsequent trip to cover the soil/seed but he wanted to get the seed down before he left as we have rain and wind forecast starting late this evening and through tomorrow into Friday.

I finally got to work in the bus at 2 PM.  My objective was to get the SurePly underlayment installed on the passenger seat platform floor.  I lightly sanded the floor patch compound I spread around last night and vacuumed up the particles.  I then mounted the head of each of the new carriage bolts to a thick plastic washer using 3M Heavy Duty (double-sided) Mounting Tape.  I slid the heads into the two mounting channels with the washers under them so the washers held the bolts up off of the bottom of the channel and forced the square collars up in the open slot of the channel where they could not turn when a nut was tightened on them.  This was a critical step because once the underlayment and tile are down I will not be able to get to the heads of these bolts.

With the bolts in position I got the piece of SurePly from the garage.  I was starting to slip it into position when I remembered that I installed an angle bracket yesterday but had not cut out a small piece of the underlayment to fit around it.  So I took the piece back to the garage, cut out the necessary space, and took it back to the coach.  I am starting to wonder how many hours I would have saved by having a proper shop set up right outside the front door of the bus.

[ Photo 2 of 2 – HR – The SurePly underlayment on the co-pilot/navigator platform floor showing how it fits under the outside wall panel and over the four mounting bolts for the seat. ] 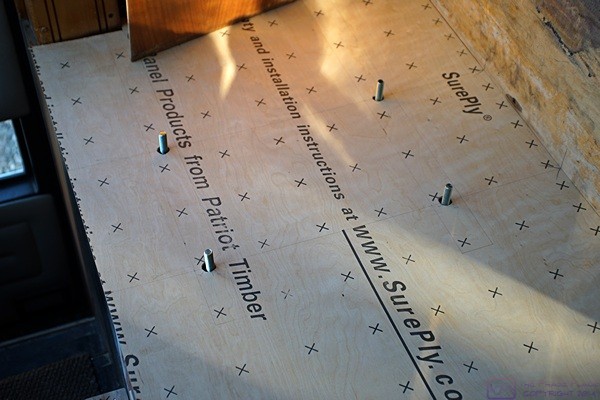 The SurePly underlayment on the co-pilot/navigator platform floor showing how it fits under the outside wall panel and over the four mounting bolts for the seat.

The underlayment slipped under the switch panel by the outside wall and dropped over the four mounting bolts just like I planned it, so taking most of yesterday to carefully cut and drill the piece paid off in the end.  That felt good, especially in comparison to how yesterday felt.

The weather today was lovely, reaching a high of 58 degrees F with sunny skies and I am sure that added to by general sense of well-being.  Our part of Michigan is under a high wind warning starting this evening, however, with maximum gusts of 55 to 60 MPH possible.  It’s a good thing we have a whole house generator because those kinds of winds cause power outages.

I decided to screw the underlayment to the bus floor rather than use staples.  Again, I did not want to get the big air-compressor and staple gun out, but I also wanted to use the screws to pull the underlayment down tight to the bus sub-floor.  I was about 50% done when I saw that Phil was putting his track loader back on the trailer.  I thought he was packing up to leave so I went out to talk to him briefly.  I went back to the bus and got another 25% of the piece screwed down before I ran out of screws.  I was using primarily 1″ #6-SR self-drilling screws with some 1-1/4″ of the same kind.  Once again my work was halted short of completion by the lack of some small part.

For dinner Linda cooked a couple of yams, heated up a couple of vegan sausages with sautéed onions and red peppers, and steamed some fresh green beans. Yum, yum, yum.  After dinner we sat in the living room for a while using our iPads.  At 8 PM we watched a few nature and science programs on PBS.  Jarel called to confirm when I was coming down to Logansport, Indiana and said that Friday would work.  Linda is headed back to the bakery in the morning so she went right to sleep after we were done watching TV.