My lower back bothered me all night, so I did not sleep well, but we both got up at 8:15 AM, took showers, and got dressed.  My right lower back seemed to have gotten worse overnight.  I pulled a muscle yesterday and they tend to take quite a while to heal.  Not good. 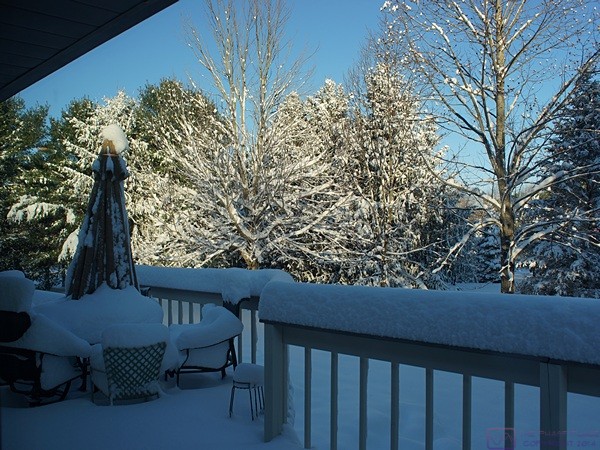 The view of our rear deck from our dining room the morning after our major snowstorm. It’s pretty if you don’t have to go outside to pack a bus or drive in it.

According to the National Weather Service newsfeed on The Weather Channel iPad app Howell, Michigan got 16.5 inches of snow from yesterday’s winter storm, the highest in Michigan.  The highest accumulation in the country was 18 inches somewhere in South Dakota, so we were very close to that.  The official amount was no doubt recorded at the Livingston County Airport about 11 miles west of us on the west side of Howell, but based on what we see on our deck we got at least a foot of snow here at the house.  It was sunny but only 25 degrees F when we got up.  The high temperature was forecast to only reach 30 and the low tonight is forecast to be 18.

Linda made vegan pancakes for breakfast.  She cooked blueberries into hers but I had mine on the side.  I think the blueberries add additional liquid to the batter and keep the pancakes from cooking properly, but Linda likes the way they turn out.  I made a pot of coffee with the last of our Ethiopian Yirgacheffe beans.  I took some Ibuprofen along with my usual morning pills.  Linda got the heating pad out and I sat with it against my lower right back on the living room sofa while we drank our coffee.  In spite of having a lot to do between now and Thanksgiving Day, we got a slow start to our day.

Linda cleared our front sidewalk so she could get to the front door of the bus.  She also shoveled a path to my car, which I parked behind the bus yesterday, and cleared the snow off of it.  She checked the snow depth with a ruler at several places on our rear deck.  It was 13 inches.  Not 16.5 inches, but it’s still a lot of snow, and it could certainly have been deeper out in the yard.

Her agenda for the day was to vacuum the inside of all the cabinets in the bus, dust the woodwork, and clean the counters and mirrors.  I exchanged some text messages with Chuck including a couple of photos.  I sent one of our bus buried in snow and he sent one of the palm trees and lush vegetation on the unoccupied lot next to theirs at Pelican Lake Motorcoach Resort.  Chuck said it has been too warm to play golf.  I did not know that was even possible but I did not feel too sorry for him.  I sent an e-mail to Butch to let him know I had delivered the antique SUN Electric distributor tester to Bill a week ago Friday.

I resumed working in the garage and spent most of the day repacking my tool boxes.  My objective was to reduce the number of boxes from five to four while maintaining some sort of reasonable logic to how they were organized.  I took short breaks throughout the day to get off my feet and had a few pretzels with hummus for lunch.

Sometime during the afternoon Kerry showed up and plowed as much of the concrete driveway as he could.  Linda must have been vacuuming in the back of the bus and I was working in the garage (with doors closed) so neither of us realized he was there until after he was gone.

I decided that I needed some additional storage boxes for organizing small parts so I drove to Lowe’s hoping to find the Stanley boxes I already have.  They had similar boxes from a different manufacturer but not the exact ones.  I tried The Home Depot but liked the boxes at Lowe’s better so I went back there and bought six, three with 10 deep bins and three with 17 medium bins.  I stopped at Meijer’s for orange juice and picked up a few other things.

When Linda was done cleaning the bus she started loading the things onboard that she had ready.  She got almost everything on board that was staged in the middle bedroom and the kitchen.  She then made three more batches of granola.  That made nine batches since Friday evening, eight of which are in the freezer.  Linda thinks a batch will last at least two weeks if have granola every other day.  If that proves to be true we should have enough granola with us in the bus to get through the end of March.

By 5:30 PM we were both ready to stop for the day.  I changed into my robe and sat on the living room sofa with the heating pad on my lower right back.  We spent 45 minutes considering possible waypoints between here and Williston, Florida.  We did not come a decision but it is very likely we will stop at two of the same places we used two years ago, the Oh Kentucky campground in Berea, Kentucky and the KOA near Cartersville, Georgia.

The Oh Kentucky RV Park in Berea is just west of I-75 at an interchange.  It wasn’t fancy but provided easy in/out access and would allow us to plug in for the night.  Just east of the Interstate at the same exit is a Walmart where our friends, Chuck and Barbara, stayed on their way south a few weeks ago.  The RV park options north of Atlanta, Georgia are surprisingly limited.  The Cartersville Castle-White KOA is convenient to an exit off of I-75 and also provided easy in/out access.  Staying there Saturday night means we can drive around Atlanta on I-285 on Sunday morning, our favorite time to bypass major cities.

Our final waypoint before going into Williston Crossings on Tuesday, December 1st will probably be Mayo, Florida where we can boondocks for two nights at John Palmer’s place.  This itinerary would have us traveling about 400 miles on Friday, 300 miles on Saturday, 340 miles on Sunday, and 75 miles on Tuesday.  Friday would be a longer drive by about 2 hours than we normally plan, but very doable.  Also, this time of year we like to get as far south as quickly as possible.

Linda opened a bottle of Leelanau Cellars Mixed Berry Winter White wine to have before, during, and after dinner.  For dinner Linda cooked a squash and heated up some frozen corn and mock chicken tenders (vegan).  After dinner I tried to check my e-mail but our Internet connection had slowed to an unusably slow speed.  At 8 PM I participated in the SLAARC Information Net and then came back upstairs and went to bed.  We both took some Tylenol PM at 11:30 and then turned out the lights.